A large number of artifacts from the late Baekje Kingdom (18 B.C.-A.D. 660), including steel armor, swords and arrowheads, were recently unearthed at the site of the Gongsanseong Fortress in Gongju, Chungcheongnam-do (South Chungcheong Province). It is here at this fortress that Baekje fought to the end against the combined forces of the Silla Kingdom (57 B.C.-A.D. 935) and the Tang Dynasty (618-907) during the wars of the 7th century. The artifacts are considered to be important clues that can tell what happened some 1,400 years ago.

In one of the fortress’ water reservoirs archeologists found a set of steel armor on which the year 645 is clearly written. There was also a set of lacquered armor for a horse, a mask that covers a horse’s face and a small bell that would be fastened to a horse, according to the Cultural Heritage Administration (CHA) on September 23.

Archaeologists also discovered a sword, a decorated dagger, a steel helmet, a number of arrowheads and various types of woodenwares. Considering that the dagger, the sword, the steel armor and the horse armor were buried in a formal setting, historians believe that the Baekje military held some sort of rite or ceremony here resolving to never retreat from battle. In addition, the researchers dug up pieces of lacquered armor with writing on them.

“The two sets of armor were found in the same layer of earth. They seem to have been used by Baekje generals who held a ceremony before the battle,” said Lee Nam-seok, president of Kongju National University. “Once we decode some 60 or 70 characters on the armor, the history of the late Baekje period will be even more uncovered.”

Pieces of lacquered armor are found in a Baekje water reservoir in Chungcheongnam-do. The characters in red clearly describe the wearer’s title and post. (photo: the CHA)

A skull with both sides of its head shattered in was also found. Considering that most of the buildings near the water reservoir were destroyed by a large fire, it is very likely that a battle between Baekje and the combined Silla/ Tang troops took place near the Gongsanseong Fortress in about the year 660.

For the first time among all Baekje historical sites, archaeologists also found a flagpole attached to the back of a saddle. In the past, researchers were only able to check the shape of a Baekje flagpole from earthenware excavated in Seosan, Chungcheongnam-do. With the discovery of a real flagpole, however, historians will now be able to figure out more about the way in which Baekje soldiers rode on horseback.

Researchers also discovered a large underground wooden receptacle, presumably used as a storage area. The hole is 3.2 meters wide by 3.5 meters long by 2.6 meters deep and the wooden panels are 20 centimeters to 30 centimeters thick. The wooden panels are fitted precisely together along the pillars, and the floor and the upper walls are still in their original forms with little or no decay. 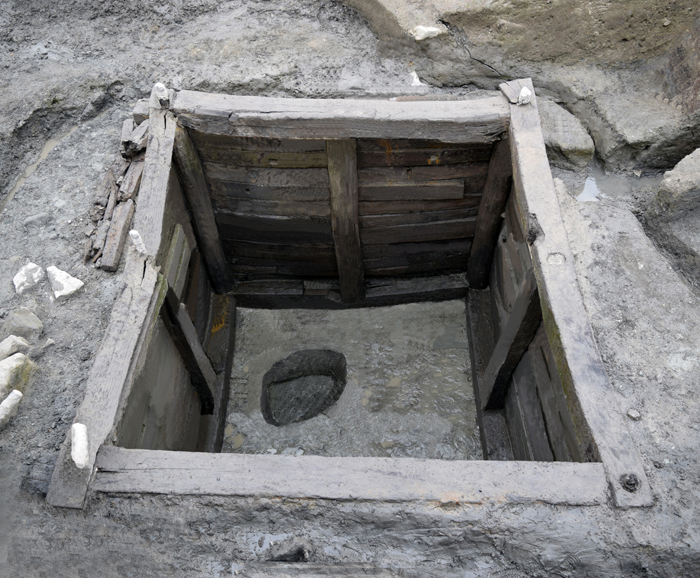 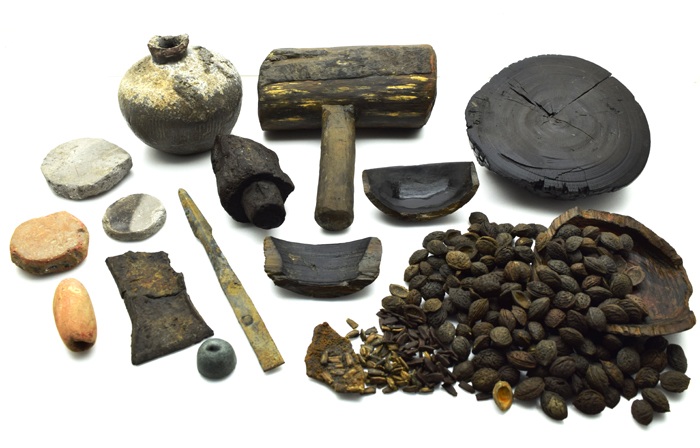 An underground wooden storage area is excavated at the Gongsanseong Fortress in Gongju, Chungcheongnam-do. Inside, there are grains, including peach seeds, pumpkin seeds, shellfish, woodenwares and a wooden hammer. (photos: the CHA)

An underground wooden storage area is excavated at the Gongsanseong Fortress in Gongju, Chungcheongnam-do. Inside, there are grains, including peach seeds, pumpkin seeds, shellfish, woodenwares and a wooden hammer. (photos: the CHA) In the wooden storage area, the researchers found grains, including peach seeds, pumpkin seeds and shellfish, as well as household goods, such as scale weights, woodenwares and a wooden hammer. Along with the wooden storage area, the archaeologists also found the remains of roads, drains and embankments, which could help shed light on the living conditions and building arrangements of the Baekje people.

The excavation site is considered to be a time capsule, as there have been many items of ironware and earthenware discovered here, evidences of the Baekje people’s way of life.