Korea shows that men, too, can be pretty

Beauty and grooming are often seen as the domain of women, but Korea has a bit more gender equality when it comes to looking good. The country is currently the world’s largest market for men’s skincare, leading in global sales of men’s cosmetics. 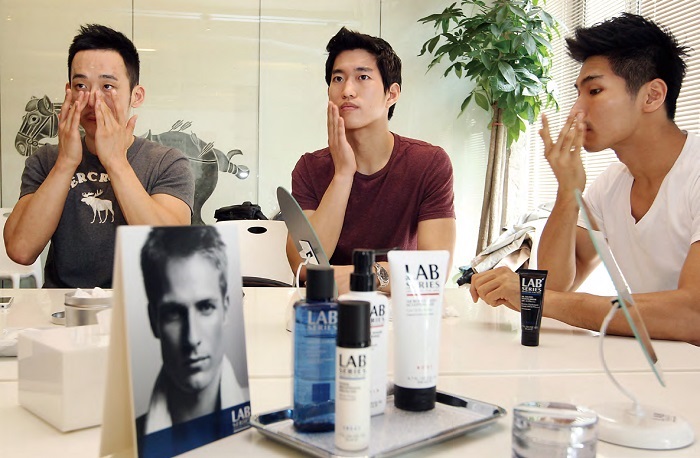 According to a July 2014 report from Euromonitor International, a London-based market research firm, the men’s grooming market in Korea increased by 7 percent to KRW 1 trillion in 2013. This is primarily attributed to an increase in the number of brands targeted at men, as well as an increase in the number of men who have shown interest in using beauty products. Sales of male grooming products at leading makeup brand AmorePacific increased by 11 percent in the same period.

For those who may feel a bit mystified by the trend, have no fear—there is help. On Sunday nights, Korean men can tune into “Get it Beauty HOMME,” a cable TV show described by its producers as a beauty guide for male viewers. Episodes cover topics such as how to mold your hair into that perfect coiffure and the best beauty products for maintaining moisturized lips or contouring your face.

How does this fit in with the image of the sojuchugging, Confucian salary man? It doesn’t. Male attention to appearance can be seen as part of an overarching preoccupation with appearance in Korea, where looking good is often seen as an important part of succeeding socially and financially. To help illustrate the sort of marketing strategies being used to promote these products, the top-ranked brand in the 2014 Korean Standard Premium Brand Index in the male cosmetics category has a name that literally translates as “men holding flowers” or “man holding flowers.”

The increase in cosmetics usage and attention to grooming is also related to the shift towards promoting fine-featured, smooth-skinned male K-pop stars who display new and alternative markers of male attractiveness. K-pop group members and other male beauty icons are also starring in an increasing number of advertisements for cosmetics.

G-Dragon, the solo star who rose to fame as part of the popular boy band Big Bang, for example, has worn everything from moisturizing creams to mascara in advertisements for makeup brand the Saem’s Global Eco line. In one commercial for the brand he even sports a smear of red lipstick. According to local news reports, the Saem has reported that G-Dragon’s presence in their “Eco Soul 90 Degree Mascara” commercial has had a positive impact on sales.

It’s possible to argue that G-Dragon represents an extreme—casual male grooming has not yet reached the level of lipstick or mascara use—but the larger trend of men buying makeup is undeniable, and men’s skincare seems here to stay. Actors Jang Dong-gun and Lee Minho, who both rose to popularity in TV soap operas, have advertised skincare products for popular local brands. Although K-pop stars may be the visible players, the trend isn’t just limited to teens and twentysomethings.

According to The Wall Street Journal, male plastic surgery has become more socially acceptable since the blepharoplasty procedure—the removal of fatty tissue from one’s eyelids—of former president Roh Moo-hyun in 2005.

The average men’s care lines typically carry products that range from BB Creams and blackhead cleansers to anti-wrinkle creams aimed at the older crowd. Perhaps initiating a trend of their own, the website for brand Bosod features celebrity endorsements from a slightly older generation, including former soccer star Ahn Jung-hwan. Ahn is in some ways an early adopter in the men’s cosmetics industry. In 2002 he costarred with baby-faced actor Kim Jae-won— now the host of “Get it Beauty HOMME”—in a commercial for tinted lotion.

More than a decade later, beauty products for men continue to increase in popularity, with Euromonitor predicting that the men’s grooming category will increase by 5 percent annually over the next few years.