Asian Games kick off in Incheon

The Incheon Asian Games 2014, one of the biggest sporting events on the continent of Asia, kicked off its 16-day run on September 19, with a spectacular opening ceremony at the Incheon Asiad Main Stadium.

Under the theme of “Diversity Shines Here,” the sporting festival for all 4.5 billion Asians in the world brings together more than 14,000 athletes and delegates from 45 teams, with gold, silver and bronze medals up for grabs in a total of 36 sporting events.

The number of competing teams in this year’s Asian Games — representing a total of 45 countries, territories or cities — is the highest number in the history of the games, uniting the Asian continent into one.

The opening ceremony was choreographed with a single descriptive phrase in mind: “Like a mother, the waters of the host city, Incheon, welcome and embrace all the visitors who have traveled here from their 45 homelands.” Directed by renowned film makers Im Kwon-taek and Jang Jin, the spectacle brought together in unity all the Asian people. 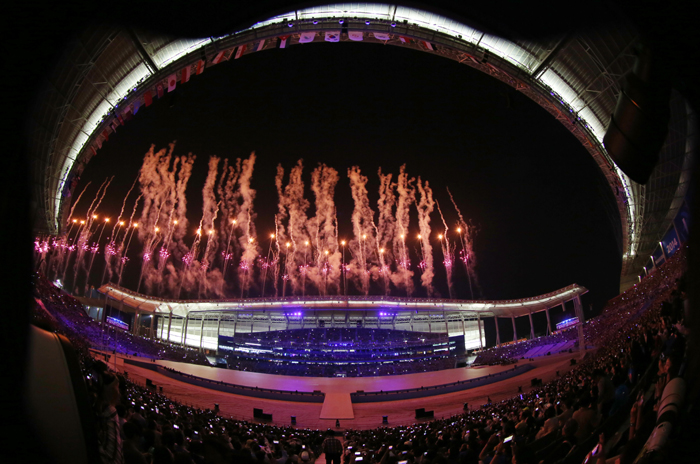 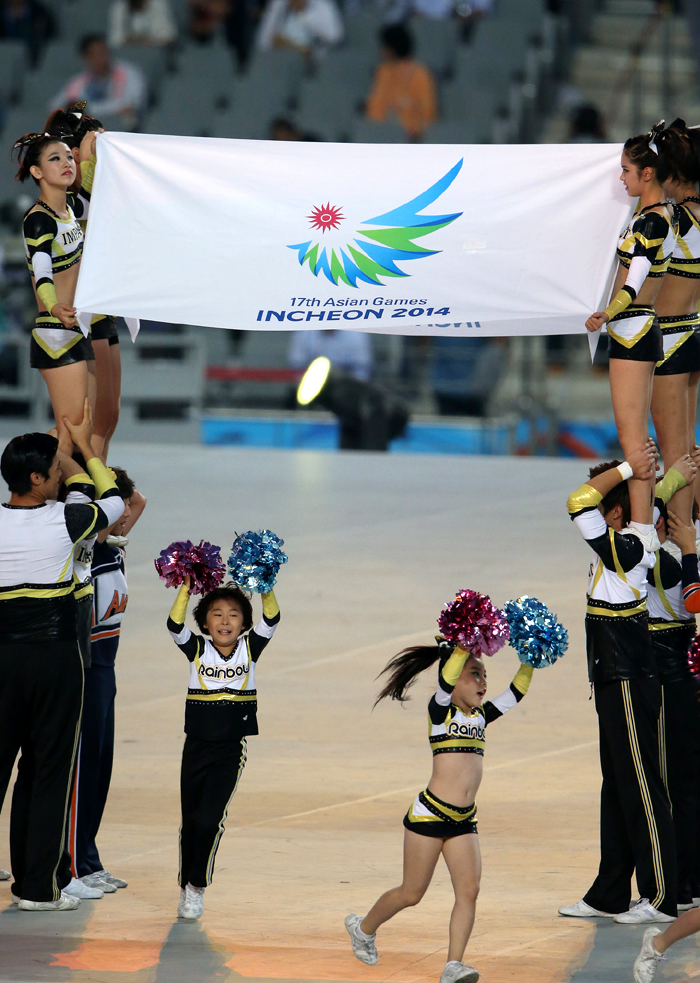 The opening ceremony kicks off the 16-day run of the Incheon Asian Games 2014. The theme is, “One Asia,” and it takes place at the Incheon Asiad Main Stadium on September 19.

The pre-opening ceremony began with a traditional performance of Bupyeong pungmulnori music, one of the host city’s intangible cultural heritage items. It’s percussion-based music performed when praying for happiness of the families and villagers. Performers wished for the success of the Asian Games as their percussion instruments created a cacophony of exciting rhythms.

A video clip featuring the national flags of the 45 participating countries and territories started off the ceremony in earnest. Following that, another clip showed the impressive moment during the opening ceremony of the 1988 Seoul Summer Olympics when a boy came on stage rolling a hoop. Twenty-six years later, the moment came alive again when a girl appeared in front of the crowds in Incheon rolling a hoop across the stage. Celebrated actor Jang Dong-gun approached the young performer and delivered a message of, “Asia is one.” 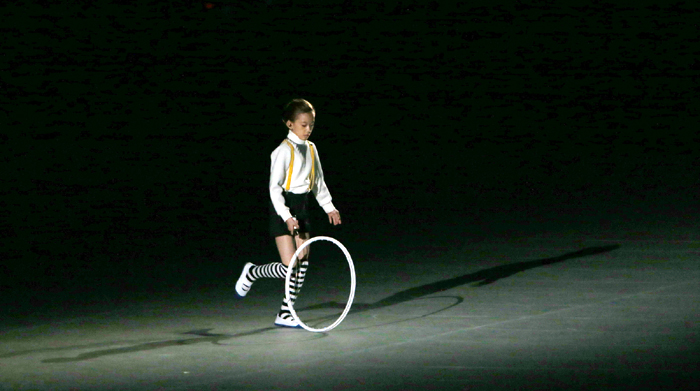 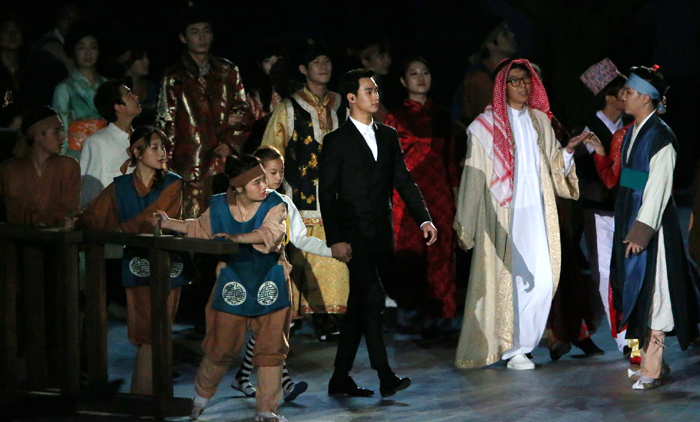 A young performer (top) rolls a hoop in the hope of unifying all Asian countries and mankind as a whole, during the opening ceremony of the Incheon Asian Games 2014 on September 19. Actor Kim Soo-hyun (bottom, center) appears on stage, holding her hand.

Another star accompanied the girl, too. It was actor Kim Soo-hyun, who created a sensation across China with his role in the mega hit TV soap opera “My Love From the Star.” His appearance brought cheers from the audience that had filled the stadium to the brim.

In the next part of the ceremony, Poet Ko Un’s profound voice resonated across the bleachers as he recited an excerpt from his poem “Asiad Song.”

The words were soon transformed into a song, as soprano Sumi Jo added a melody to the poem, accompanied by a choir consisting of hundreds of Incheon citizens. Jo continued to sing a series of Korean traditional folk songs, including “Arirang,” with her signature high-pitched voice, sending shivers down the spines of the spectators.

In addition, two characters associated with the Incheon area, Biryu and Sim Cheong, made special appearances in the show, linking together Incheon and other Asian regions.

Biryu is the legendary founding father of the Baekje Kingdom (18 B.C.-A.D. 660) whose territory covered what is today Incheon, while Sim Cheong is a young woman from an ancient novel who dived into the sea off Incheon as a sacrifice for the fishermen who promised to give her blind father a huge amount of rice.

The musical section of the ceremony constituted four themes: Old Asia; Asia meets from across the waters of Incheon; Asians become family and friends; and, lastly, the future of Asia, One Asia. The two fabled characters met in Incheon and brought together all other Asian nations as friends and family. 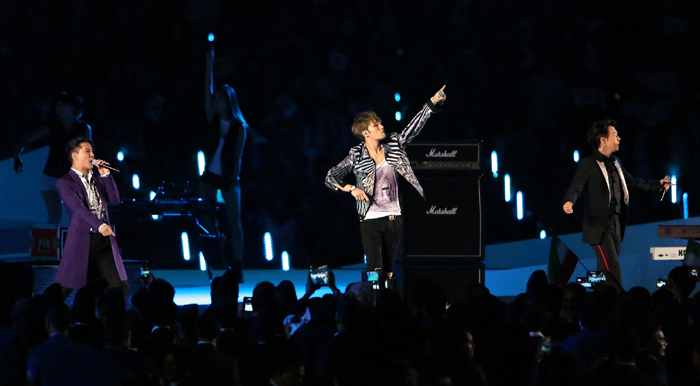 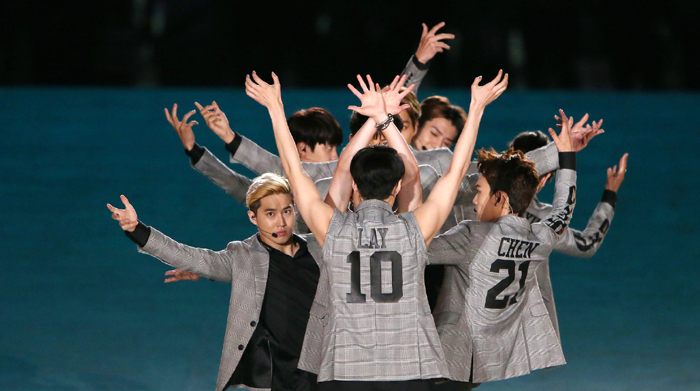 The pop band JYJ, which sang the Incheon Asian Games theme song, “Only One,” and the group EXO added glamour to the already stellar show.

In the third part of the opening ceremony, participating athletes from the 45 countries and regions marched into the stadium in Korean alphabetical order. The delegates from Nepal entered first and the rest followed, with the host country, Korea, coming in last.

President Park Geun-hye (front, center) waves to the athletes as they enter the stadium. 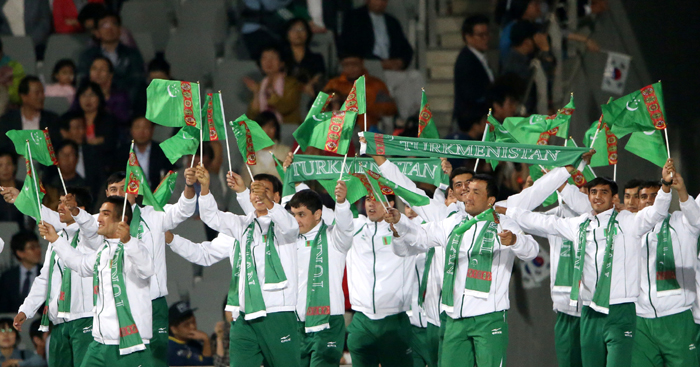 Athletes from Indonesia (top) and Turkmenistan march into the stadium. 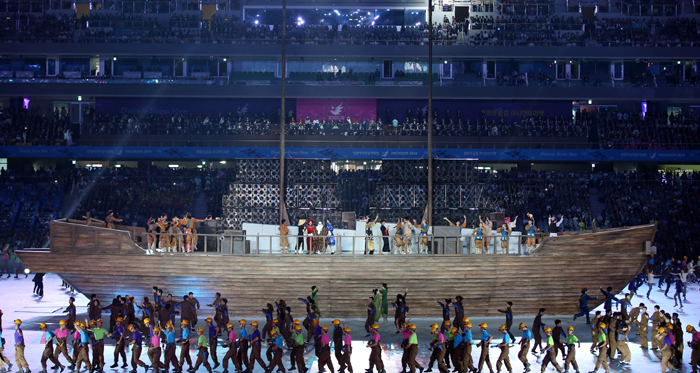 A huge ship looms on stage, manifesting, ‘the reunion of the Asian people and Asia in unity.’

The games were declared open by President Park Geun-hye with the words, “I declare open the Incheon Asian Games.” 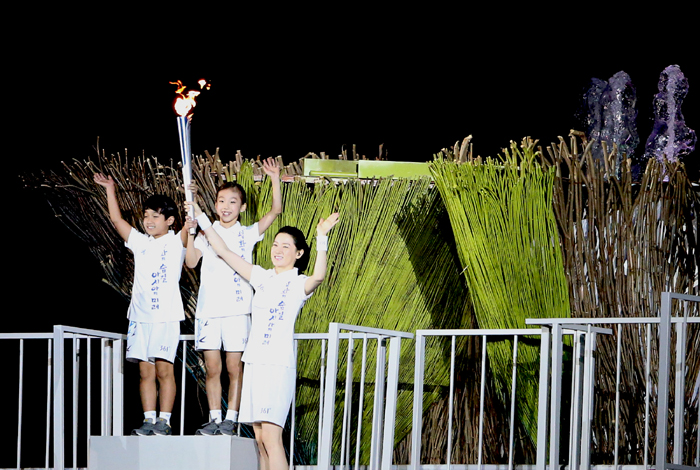 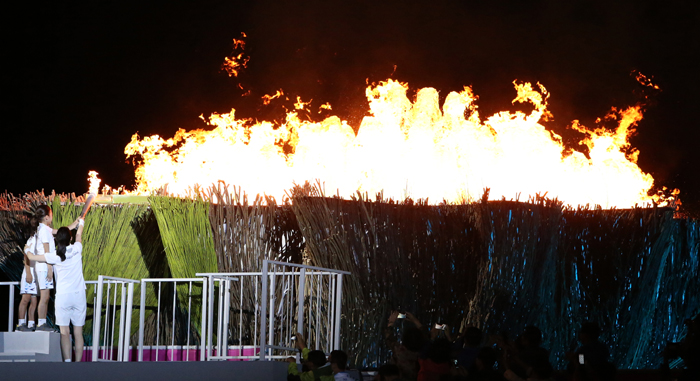 Actress Lee Young-ae, the final bearer of the Incheon Asian Games torch, lights the cauldron together with two young athletes.

The highlight of the event was the flame-lighting ceremony. The final bearer of the Incheon Asian Games torch turned out to be cerebrated actress Lee Young-ae, who won over the hearts of fans everywhere with her role in the 2003-2004 soap opera series “Daejanggeum,” or “Jewel in the Palace.”

The torch was handed over to the star after a series of carriers, including baseball player Lee Seung-yeop, golfer Park Inbee, speed skater Lee Kyou-hyuk, former basketball player Park Chan-sook and former tennis player Lee Hyung-taik all carried it around parts of the stadium. The actress, together with two young athletes, lit the flame, which resembles a fountain of cascading water. It will illuminate Incheon City for 16 days. 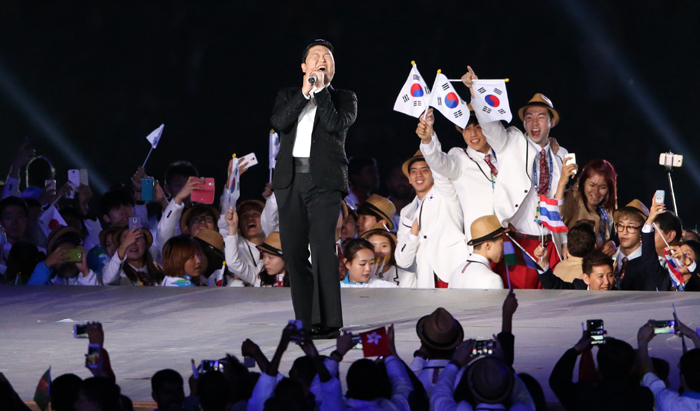 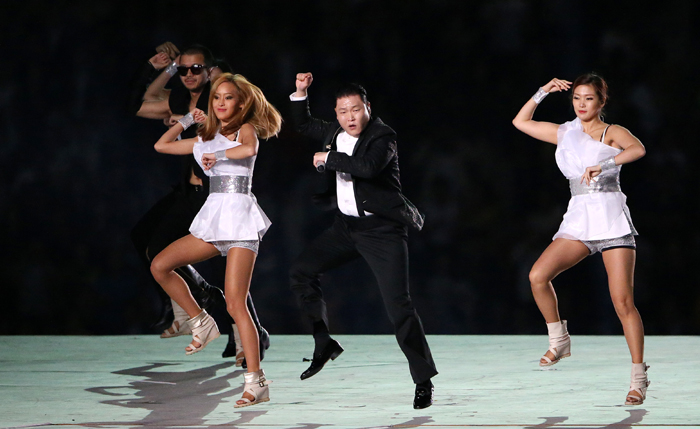 Global sensation Psy dances for the athletes and spectators alike, as he performs his hit song “Gangnam Style” during the opening ceremony of the Incheon Asian Games 2014.

Global pop sensation Psy put on a rousing finale to wrap up the four-hour ceremony. As a Chinese pianist began to play Psy’s song “Champion,” the singer himself joined in, turning the show into a dance party. His mega hit “Gangnam Style” had both the athletes on stage and the spectators in the stands all performing his signature horse dance in unity.

Indeed, Asia had been brought together as one.