A festival will be held in Seoul this September offering the opportunity to experience and enjoy various aspects of ancient royal court life during Joseon times (1392-1910). Festival-goers can learn about royal ancestral rites, the tea ceremony and court food, appreciate Korean traditional music, or gugak, performances at the palace, or simply walk through the secret garden of the king.

The Cultural Heritage Administration and the Korea Cultural Heritage Foundation will jointly host their Royal Culture Festival 2014 from September 20 to 28 at four selected palaces across Seoul, as well as at the Jongmyo Shrine, at Gwanghwamun Square and along the Seoul fortress wall.

Under the slogan “Meet the Royal Palace Today,” this festival is a pilot project to showcase aspects of life in the royal court by combining both the tangible and the intangible from the ancient kingdom with today’s modern art and high tech. There will be musical performances and modern art displays involving both sound and installation art. 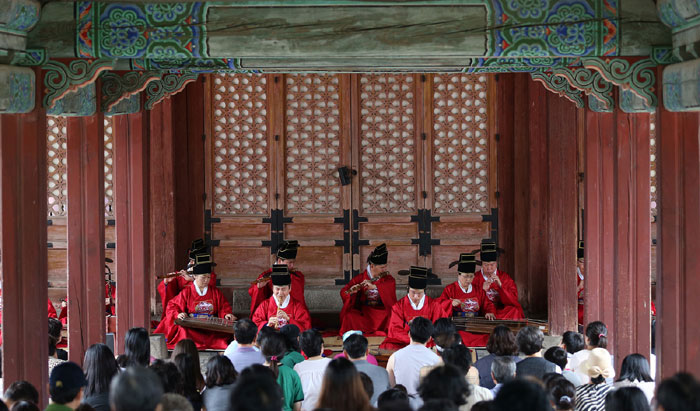 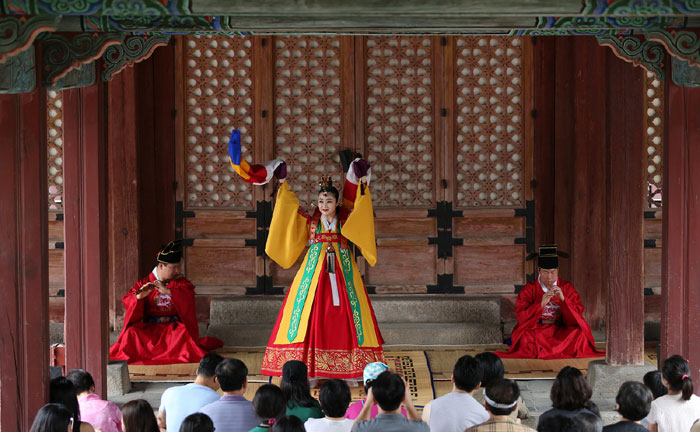 The festival will begin on September 19 in the evening with a celebratory event at 8 p.m. at Gwanghwamun Square. The night’s program will introduce the festival and feature a concert and a media and light show at Gwanghwamun Gate, dousing the gate with a combination of art and technology.

Concerning court rites, Gyeongbokgung Palace will host a series of programs including lectures about the tea ceremony and court food, an exhibition of traditional ceramic ware and a demonstration of how to make traditional pottery. The palace will also host outdoor activities promoting traditional games and will host performances featuring Korea’s important intangible cultural assets, such as solo performances of the traditional transverse flute, thedaegeum sanjo, tightrope walking, or jultagi, and a mask game, or baltal, where one wears a mask on one’s foot. 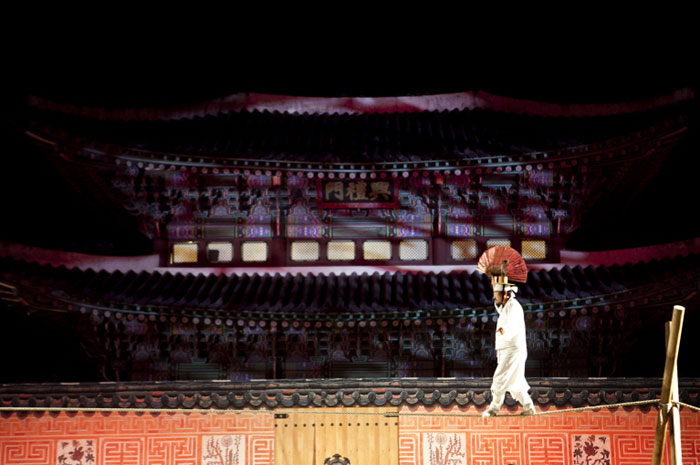 At Changdeokgung Palace, visitors will be able to enjoy nature and appreciate gugak on palace grounds, read a book in the king’s secret garden, or look closely inside the Injeongjeon Hall, as part of the palace’s particular emphasis on nature at this year’s festival. 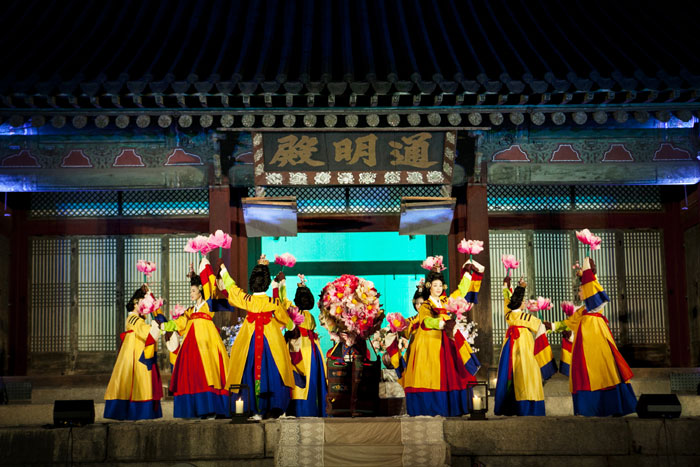 Changgyeonggung Palace will be filled with wonderful melodies thanks to its focus on court life, including gugak, the sound of wind chimes and shadow plays, all giving visitors a hint at daily life in the palace.

The Jongmyo Shrine will be open at night during the festival for performances of royal ancestral ritual music, orjongmyo jeryeak. 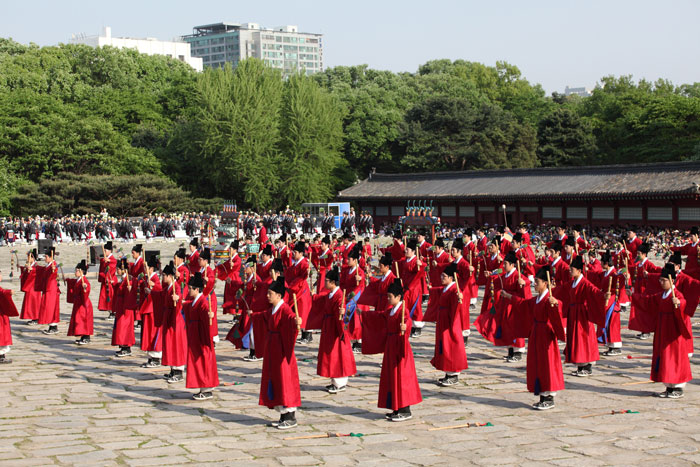 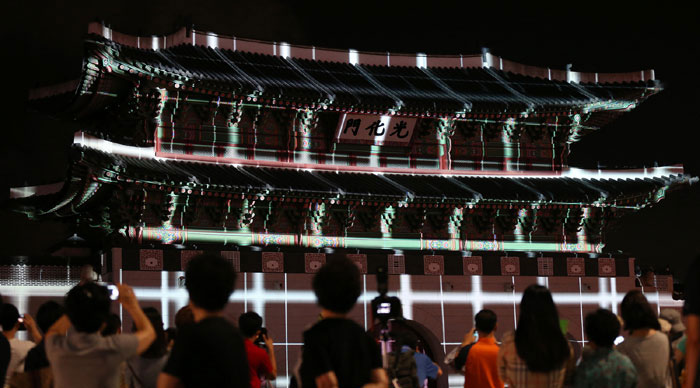 Visitors check out the media and light show at Gwanghwamun Gate.

A media and light show is superimposed onto Gwanghwamun Gate.

In the plaza in front of Gyeongbokgung Palace’s Heungnyemun Gate, there will be art exhibitions and evening concerts. A media light show will be held at 8 p.m. every night during the festival at Gwanghwamun Gate, illuminating the gate with a combination of art and technology. In the exhibition hall, people can see a virtual reality image of Gyeongbokgung Palace, watch the royal ancestral ritual music performance, learn about ancestral rites, appreciate some new robotic displays and appreciate the digital art installations.

The highlight of the festival is the media light show which will be shone at 8 p.m. on the façade of Gwanghwamun Gate. Various media art images will capture the eyes of the people on the face of the gate.

The festival also includes a fortress walk led by a cultural heritage guide. Program participants will learn about the ancient Seoul fortress while walking along the ancient wall from Hyehwamun Gate to Naksan Park. After the tour, they will get to see some musical performances. Attendance needs to be booked in advance.

More information about the festival is available at its homepage (www.royalculturefestival.org). 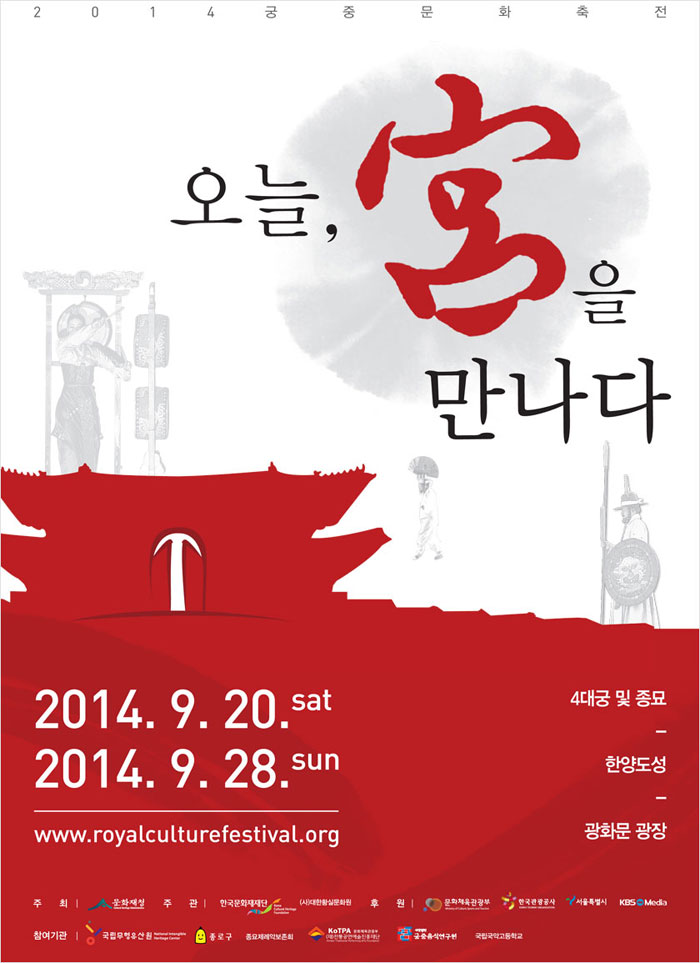 A poster for the upcoming Royal Culture Program
About the author