Jumong: founder of Goguryeo Kingdom is man of legend, history

Described as the son of the heavens, Jumong was the founding king of Goguryeo, which eventually became the largest dynasty in Korean history. Also known as the Holy King of the East, mythological tales of his origins mostly follow the same basic story. The most widely recognized source of these tales is an ancient stone engraving created by Jumong’s descendents called the Stele of Gwanggaeto the Great. An homage to Goguryeo history, the stone states,“Goguryeo’s founder is Jumong, son of the heavens, whose mother was the daughter of the Water God Habaek.”

A more detailed version can be found in the Samguk Sagi, which gives a full account of the parents. Jumong’s father Hae Mosu was sent to earth from heaven. He met Yuhwa, Jumong’s mother, one day when she was bathing by the river with her two sisters. Enchanted by their extreme beauty, he managed to trap them in a palace, intent on enjoying himself. However, the two sisters escaped, leaving Yuhwa alone with Hae Mosu.

When Yuhwa’s father, the River God Habaek, discovered what he’d done, he angrily approached Hae Mosu, who then explained that he was sent from the heavens and was intent on marrying his daughter. After testing Hae Mosu’s strength through a brief dual, Habaek externally agreed to the marriage but attempted to trap Hae Mosu in a leather pocket after getting him drunk. Furious, Hae Mosu burst through the pocket and fled, leaving Yuhwa behind to be scolded by her father, who sent her away in exile. Yuhwa was then discovered by King Geumwa of Dongbuyeo, who was touched by her beauty and sorrow and made her into his concubine. 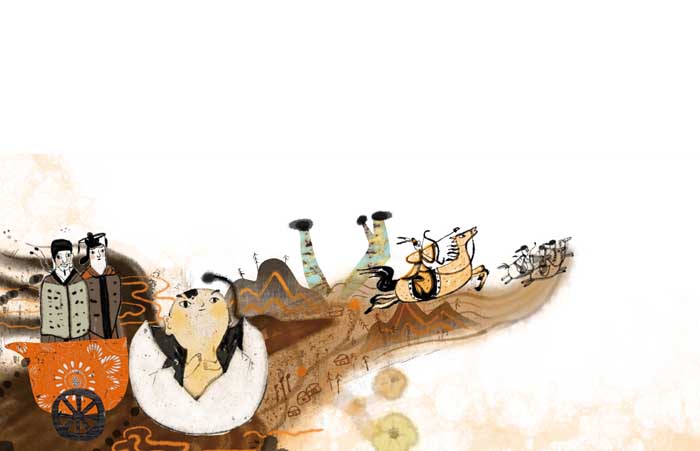 One day, a beam of sunlight entered the palace, touched Yuhwa, and impregnated her. Five days later, she laid an egg, which King Geumwa threw away into the streets, hoping wild animals would eat it. However, the animals did not devour the egg—rather, they protected it. Astounded at such a discovery, King Geumwa tried to destroy the egg himself, but when that proved impossible, he relented and returned the egg to Yuhwa. The boy who hatched from the egg was none other than Jumong.

Growing up, Jumong was constantly slandered by Geumwa’s sons, who were jealous of his talents in archery. On the advice of his mother, he fled Dongbuyeo to reunify the Gojoseon territories that’d been broken up by the Han Chinese. Legend has it that as he crossed a great river to go southward, turtles and other creatures of the sea gathered to form a bridge especially for him. He quickly attained a following and established Goguryeo in 37 BCE. He then conquered the neighboring kingdoms of Malgal and Biryu, with Haengin and Northern Okjeo soon following.

During Jumong’s conquests, his mother, first wife, and son remained back in Dongbuyeo, where his mother eventually fell ill and died. When he heard of his mother’s death, he sent for his first wife and son, Ye and Yuri, who arrived five years later. Ye became queen, causing Jumong’s second wife Soseono to become extremely jealous and flee southward with her son, who became the first king of the Baekjae Kingdom. Jumong died soon afterwards at the age of 40.

MBC aired a drama based on Jumong in 2006, simply called Jumong. They eliminated most of the traditional mythology, making his biological history fully human instead of divine, and focused mainly on Jumong’s role in resisting the Han Chinese and uniting the ancient Gojoseon people under a new empire, Goguryeo.

History, however, is never without controversy. Because Goguryeo expanded into what is now China, Chinese researchers are now claiming that Goguryeo history belongs to China, not Korea. After founding the Northeast Project in 2002, Chinese researchers have since claimed that the people of Goguryeo should actually be classified as ancient Chinese, and that the kingdom of Goguryeo has no direct relation to the later Korean dynasties of Goryeo, Joseon, or any other Korean nation. Jumong, as portrayed by Chinese researchers, is not the son of heaven, but simply a normal monarch, which effectively lowers his historical status from emperor to provincial ruler. Korean responses to such claims have not been amiable, leading researchers in Korea to start their own historical foundations to repudiate such claims as falsifications.

On the other hand, there are several Shinto shrines in Japan dedicated to Goguryeo kings, Jumong included. They were erected by Goguryeo refugees who fled to the Japanese islands when their kingdom fell to Silla’s alliance with the Chinese Tang. Although they have often been renamed by Japanese nationalists, the shrines are currently maintained by Japanese-Koreans who wish to preserve their historical ancestry.