Welcome to Incheon, the city of delicacies

The Incheon Asian Games are just around the corner, with less than three weeks remaining now until the opening ceremony. On the occasion of Asia’s biggest sporting event, the city is expected to attract more than two million visitors. In line with this, Incheon City has been building a celebratory atmosphere and has been promoting various upcoming side events. Incheon is, indeed, the heaven of delicacies. Many well-known Korean foods originate in the port city. Since the nation’s opening in the 1870s, it was the first area to benefit from foreign influences. Due to this, Incheon has been known as a city that offers exceptional and exotic cuisine.Korea.net would like to introduce to its readers, among the many possible options, three must-visit food streets in the city. China Town, home to jjajangmyeon Jjajangmyeon, commonly classified as “Chinese” food in Korea, actually originated in Incheon. The history dates back to 1883. With Korea opening to the world, many foreigners flew to the country, arriving from a variety of nations. Among them were many people from Shandong and other Chinese provinces who came to cook what is now called jakjangmyeon, a type of noodles mixed with fermented soybeans. After liberation in 1945,jakjangmyeon went through some gradual changes, with the addition of meat, vegetables and caramel as it adapted to satisfy the Korean palette, and finally became today’s jjajangmyeon. Centered around where many ethnic Chinese people lived, a growing number of jjajangmyeon restaurants have formed, and it has since grown into a genuine neighborhood. 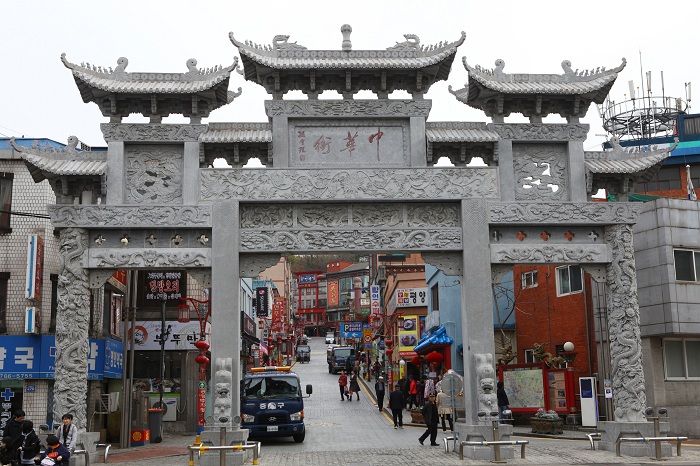 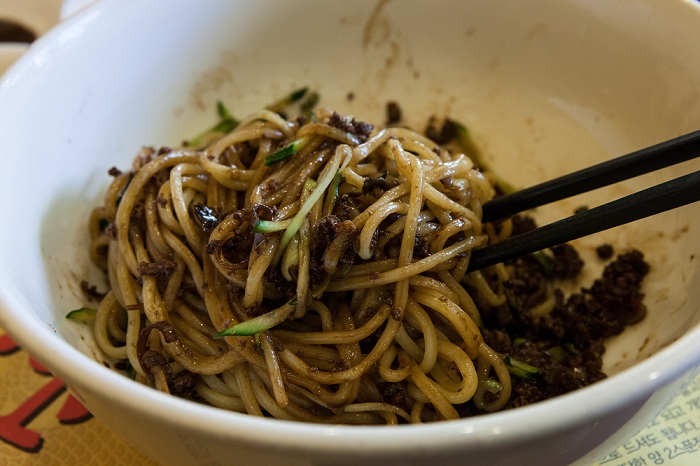 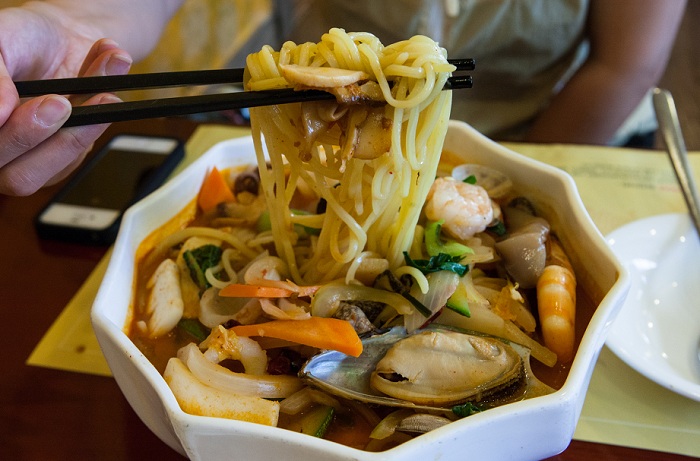 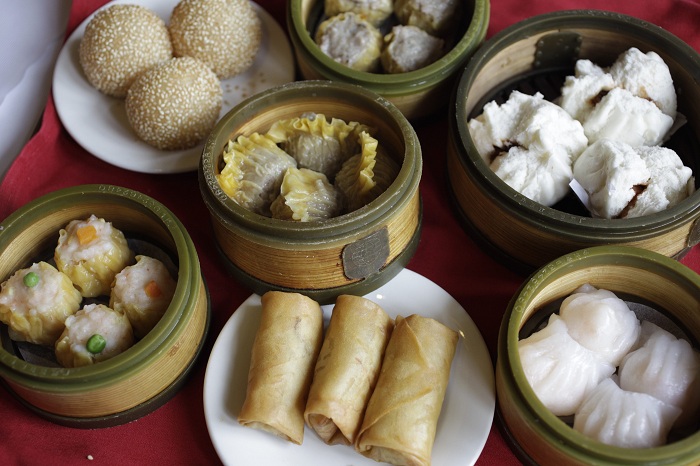 True to its name, everywhere in the neighborhood is adorned with Chinese-style decorations, from the entrance, where a gigantic Chinese traditional gate is found, to the various architectural touches and alleys, all decorated in red, the traditional color of good fortune and joy in many Chinese cultures. It creates the illusion that you, too, are standing somewhere in the middle of China. One of the must-eat foods in Incheon’s China Town is definitely jjajangmyeon cooked by an ethnic Chinese chef. In particular, “white jjajang,” made up of beans, has recently been enjoying much popularity. Unlike otherjjajangmyeon dishes, made up of chunjang, fermented soybean, white jjajang has a much softer texture, is less oily and is relatively easier to digest.There are also some highly recommended specialties that you should try, even if you already had a meal at another restaurant. There are a variety of dim sum, a type of Cantonese food, that include dumplings, lamb skewers, mooncakes, pittas, fortune cookies that contain a daily aphorism, and more, all on sale at many of the street stalls. It can really be a unique experience. *Traffic information: Metro line No. 1 Incheon Station, exit No. 1. You can’t miss the gates to China town. Sinpo International MarketThe Sinpo International Market is the first conventional market built in Incheon around the late 19th century. High-quality vegetables were traded among people from different countries, including Japan and China. There are traces of stores, houses and brown wooden buildings, reminiscent of old Japanese movies, still remaining in every corner of the neighborhood’s alleys. The Sinpo International Market, more than a century old, is known for dakgangjeong, a sweet and sour chicken dish. It is deliciously spicy and the crispness lasts for a long time. It normally takes about 30 minutes in line to get one’s hands on the meal, but, still, the restaurants are crowded with customers waiting for the delicacy. 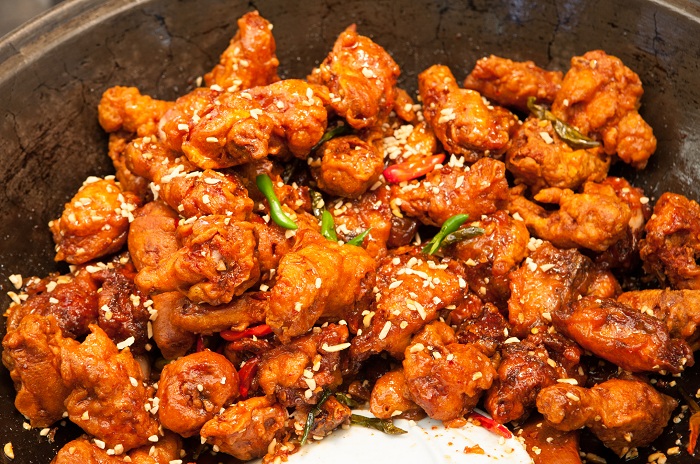 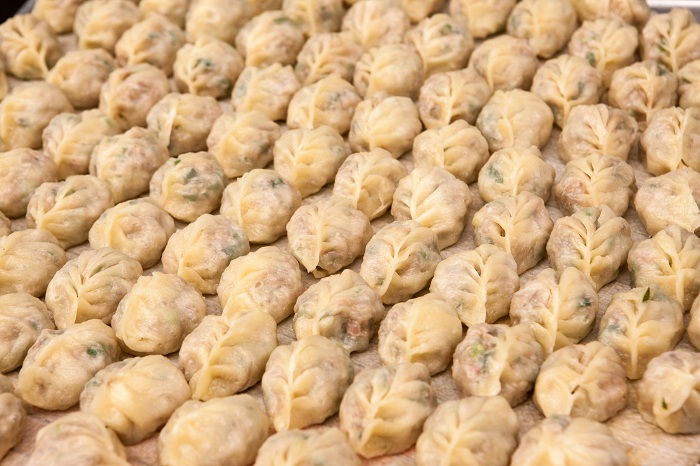 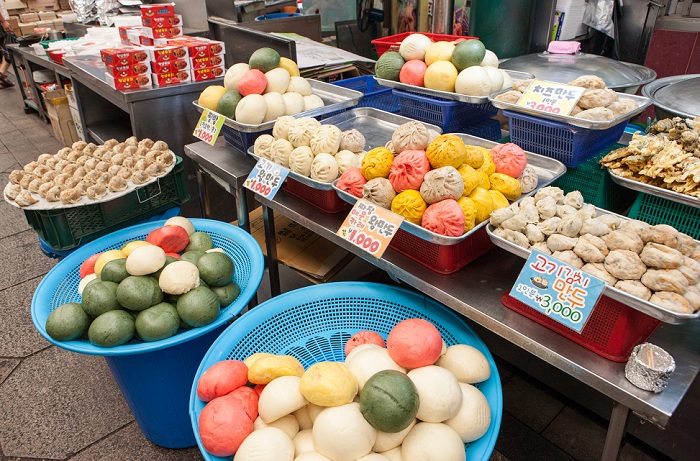 Pictured are delicacies offered in the Sinpo International Market. (From above) Sweet and sour chicken, dumplings, steamed buns with a red bean paste filing. (photos courtesy of the Korea Tourism Organization)

Sweet and sour chicken is not alone on the must-eat list of the Sinpo market. Colorful steamed buns and dumplings stuffed with meat and red bean paste can be a good substitute for a meal. In the vicinity of the market sits the Incheon Complex Fish Market, where you can have fresh fish, just caught in the Yellow Sea, at a reasonable price. 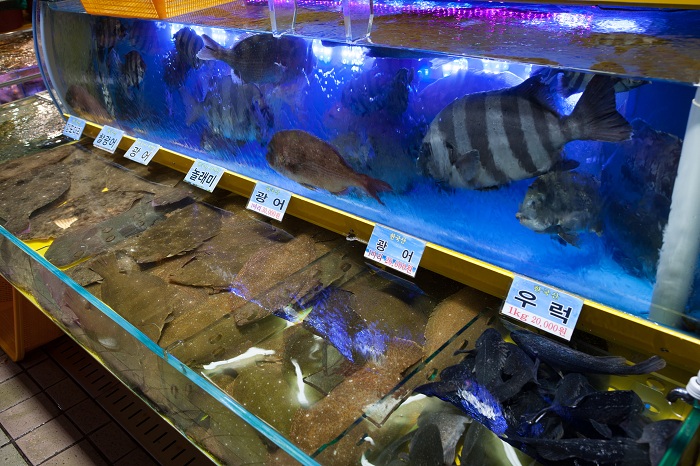 It’s not simply a market where only trade occurs. It is also frequented by many tourists. They can use singitongbo, a replica of the old sangpyeongtongbo, banknotes used during Joseon times. For the tourists, the market offers various cultural programs and discount coupons. *How to get there: Dongincheon Station, exit No. 2. Walk about 100 meters toward Sinpodong.Homepage: https://www.sinpomarket.com/ Cold Noodles Street in Hwapyeong-dong 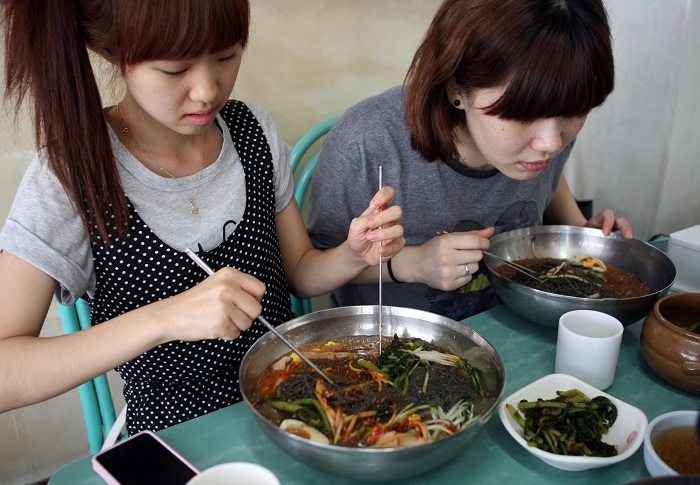 Cold noodle restaurants in Hwapyeong-dong provide abundant amounts of food at affordable prices. (photo: Yonhap News) Cold Noodles street in Hwapyeong-dong, in Jung-gu, was formed in the early 1980s. It’s well-known as the place to go to get a plentiful amount of noodles at a reasonable price. Most famous here is the “washbowl noodle” dish. The dish itself is double the size of a normal bowl. It’s made up of chewier noodles, a savory broth and a reddish sauce. Visitors to the street are highly recommended to go with an empty stomach because the bowls are really big. By Lee Seung-ah Korea.net Staff Writer slee27@korea.kr