Incheon games to show ‘One Asia with Korean beauty’

“We will present a festival where all can enjoy, with sympathy and harmony,” said Im Kwon-taek, one of Korea’s top filmmakers, who will supervise and produce both the opening and closing ceremonies. Director Im was speaking during a press conference held at the National Museum of Modern and Contemporary Art, Seoul, on August 27. “We have seen large-scale ceremonies for international sporting events hosted by superpowers. With the Incheon Asian Games ceremonies, however, we will differentiate from that model by putting on a gala with wit, humor and ideas which all Asian countries can enjoy,” he added. 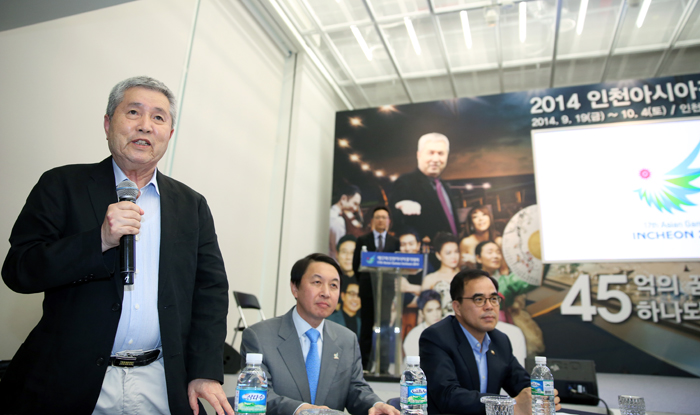 Director Im Kwon-taek (left) explains his concepts for the opening and closing ceremonies of the Incheon Asian Games 2014 at the National Museum of Modern and Contemporary Art, Seoul, on August 27.

The press conference was attended by two famous moviemakers — Im Kwon-taek and Jang Jin — who are in charge of producing both the opening and closing ceremonies, as well as Second Vice Minister of Culture, Sports and Tourism Kim Chong and clothing designer Rhee You-sook. The conference featured video clips of preparation for the opening and closing ceremonies and a briefing on the opening ceremony. It also unveiled the outfits for the placard-holders during the two ceremonies. The video footage, introduced by director Jang Jin, showed performances based on special stories and themes that harmonize with Korean values and Asian cultures. Director Jang said, “It is most important to have a message with which everyone can sympathize, rather than simply the scale of the show. Through the performances, we hope to show that there is but one Asia, where people respect and care for each other.” “Due to Incheon’s proximity to the sea, we have limits on using special effects, such as high wire acts. However, we will focus on creating a wonderful show, involving people, artificial lights, visual effects and the stage,” Jang added. 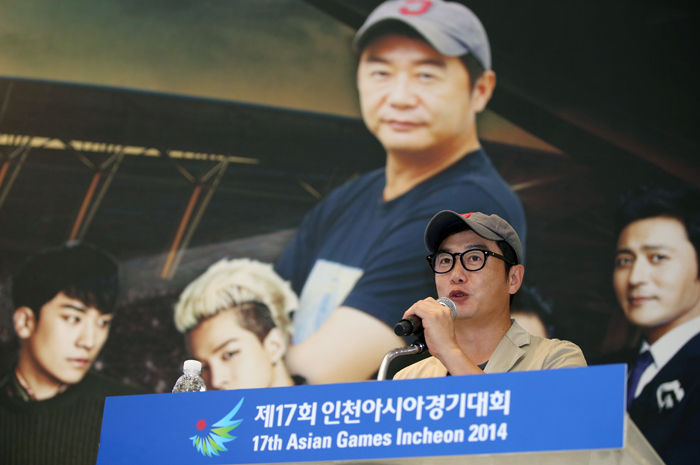 Director Jang Jin talks about overall preparations for the opening and closing ceremonies of the Incheon Asian Games 2014.

The opening ceremony will take place in the Incheon Asiad Main Stadium on September 19. A two-part “cultural performance” will be held before the main ceremony. The first part of the performance will begin with a greeting ceremony for the distinguished guests featuring a group of pungmul performers, traditional Korean percussionists, all Incheon citizens. The welcoming ceremony will be followed by a series of official songs chosen to represent past large-scale international sporting events which Korea has hosted. A popular band, EXO, will highlight the welcome concert. Soprano Sumi Jo and 919 members of the Incheon Citizens’ Choir will also perform together, singing “The Song of the Asiad.” The latter part of the show is based on a four-part story of Asia. In the distant past, according to the myth, Asia was one, but it was divided into 45 countries with different traditions and cultures. Travelling over the ocean, these countries now meet again and gather in Incheon to join together as one, with understanding, communication and dreams for a peaceful future across the continent. The show will star some famous celebrities, including actors Jang Dong-gun and Kim Soo-hyun, pansori, Korean narrative singing, master Ahn Sook-sun and famous musical performers and dancers of various genres, ranging from traditional dancing to ballet. 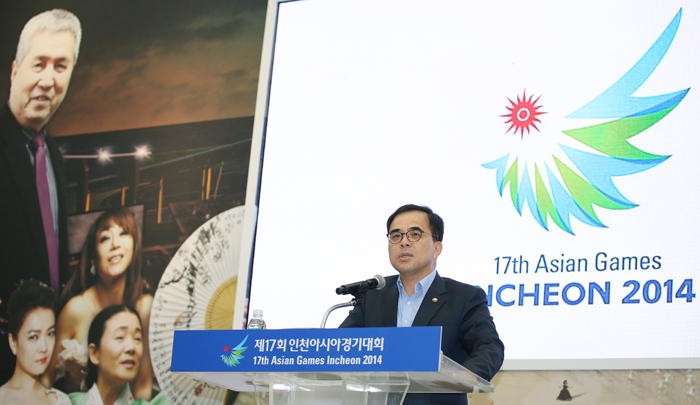 Second Vice Minister of Culture, Sports and Tourism Kim Chong speaks at the National Museum of Modern and Contemporary Art, Seoul, on August 27.

The official ceremony will begin with congratulatory remarks from high-ranking distinguished guests as soon as the show’s over. It will include declarations of athletes and judges and the flame lighting, the highlight of the ceremony. The final torch bearer is unknown and will be unveiled only on the opening day itself. After the lighting ceremony, boy band JYJ, the official ambassadors for the Incheon Asian Games 2014, will perform a concert and sing the official song of the games, “Only One,“ followed by rapper and singer Psy who will be the final performer of the evening. 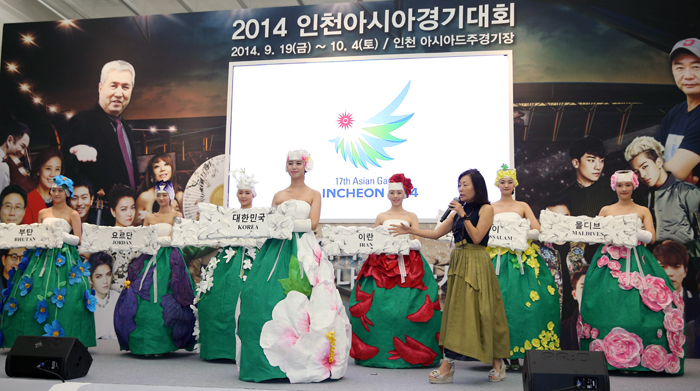 Professor and clothing designer Rhee You-sook (third from right) explains the outfits for the placard holders during the opening and closing ceremonies.

Professor and clothing designer Rhee You-sook revealed the costumes for the placard holders of seven countries, including Korea, Bhutan and the Maldives, out of the total 45 participating countries in the games. “Based on the theme of a rendezvous between tradition and today, it makes for a great evolution, a corset from the West and a traditional Korean skirt, created in wonderful Oriental Hanbok dress,” said Rhee. Hanbok is the traditional Korean attire. “Each participating country’s outfit is designed with that country’s national flower,” she added. The Hanbok dresses Rhee created are decorated with the national flowers of that country, made from Hanji, traditional handmade mulberry paper. 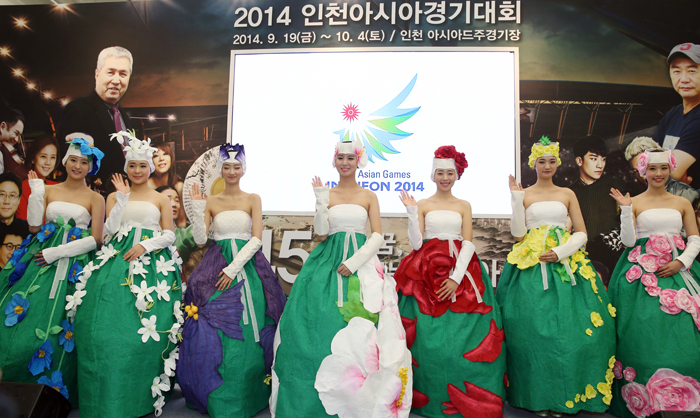 Models clad in their outfits for the Incheon Asian Games 2014 opening and closing ceremonies wave to the audience.

Second Vice Minister of Culture, Sports and Tourism Kim Chong emphasized safety by saying, “Safety is the first priority for a successful hosting of this event. I hope the upcoming games will bring more energy and happiness to the people. The government will make active efforts for the success of the event. I hope all of you can support us.”Written by Yoon Sojung All photos: Jeon Han Korea.net Staff Writers arete@korea.kr