Korean literature is usually divided chronologically into classical and modern periods. Korea’s classical literature developed against the backdrop of traditional folk beliefs. It was also influenced by Taoism, Confucianism, and Buddhism. Among these, Buddhist influence held the greatest sway, followed by enormous influences from Confucianism during the Joseon period.

Modern literature in Korea, on the other hand, developed out of its contact with Western culture, following the course of modernization. Not only Christian thought, but also various artistic trends and influences were imported from the West. As the “New Education” and the “National Language and Literature Movement” developed, the Chinese writing system, which had traditionally represented the culture of the dominant class, lost the socio-cultural function it had previously enjoyed.

The hyangga poetry of the Silla period signaled the beginning of a unique poetic form in Korean literature. The hyangga were recorded in the hyangchal script, in which the Korean language was written using “sound” (eum) and “meaning” (hun) of Chinese characters. Fourteen poems in the hyangga style from the Silla period have been preserved in the Samgungnyusa (Memorabilia of the Three Kingdoms).

The literature of the Goryeo period is marked by an increased use of Chinese letters, the disappearance of hyangga, and the emergence of Goryeogayo (Goryeo songs) which continued to be transmitted as oral literature until the Joseon period.

The creation of Hangeul in the early Joseon period was a key turning point in the history of Korean literature. Akjang (musical scores) were written in the Korean script, such as Yongbieocheonga (Songs of Flying Dragons Through the Heavens).

The sijo (current tune) is representative of Joseon period poetry. Its poetic form was established in the late Goryeo period, but it flourished to a greater extent under the Joseon period’s new leading ideology, the Neo-Confucianism of China’s Song Dynasty. Another form of Joseon-period poetry, the gasa is properly placed in the category of verse, but its content is not limited to the expression of individual sentiments. It often includes moral admonitions. 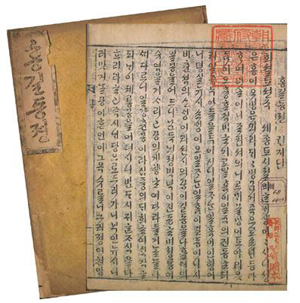 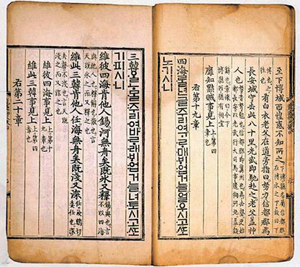 Honggildongjeon
Honggildongjeon (Tales of Hong Gil-dong, the first novel published in Hangeul) is a work of social criticism that scathingly attacked the inequities of Joseon with its discriminatory treatment of illegitimate offspring and its differences based on wealth.

Yongbieocheonga Verse
The script eulogizies the virtue of the ancestors for the House of Yi, the founding family of the Joseon Dynasty, likening them to a deep rooted tree and a spring of deep waters.

The first classical fiction in Korea includes Kim Si-seup’s Geumosinhwa (Tales of Geumo) which was written in Chinese characters and Heo Gyun’s Honggildongjeon (Tales of Hong Gil-dong) written in Hangeul. As time passed, Hangeul was used widely in Korean society, resulting in the growth and development of Korean language and literature studies. Modern Korean literature was formed against the background of the crumbling feudalistic society of the Joseon Dynasty and the importation of new ideas from the West. As forms of modern Korean literature, the changga (a new type of song) and sinchesi (new poetry) were hailed as new poetic forms.

Although Korean painters showed a certain level of accumulated skills from the time of the Three Kingdoms, most paintings have been lost because they were drawn on paper. As a result, it is only possible to appreciate a limited number of paintings from this age such as the tomb murals. In addition to the Goguryeo mural paintings, the landscape tiles of Baekje and the Painting of the Flying Horse of Silla combine to attest to the characteristics and quality of paintings during the Three Kingdoms. These works display energetic and bold lines and well-organized composition, distinctive features of this age.

Only a handful of paintings of Unified Silla remain. Still, the painted illustrations of the teachings of the Avatamsaka Sutra (the Flower Garland Sutra) bears witness to the refinement of the paintings of this age. Exquisite and lively lines characterize these illustrations.

Both decorative and Buddhist paintings reached a peak during the Goryeo Dynasty. During this age, a great variety of paintings were produced. The works from this period that have survived are mainly Buddhist paintings of the 13-14th century. The main features of these works include elegant postures, delicate and exquisite folds in the clothing and refined hues, indicative of the thriving Buddhism of this epoch.

The greatest advancement in Korean painting took place during the Joseon Dynasty. Trained professional painters and literati artists played a leading role in the development of painting. In particular, economic growth, political stability and ideological development in the 18th century served as catalysts for the predominance of uniquely Korean painting styles. This trend can be seen in landscape paintings of actual Korean scenes and genre paintings with secular themes. Jeong Seon (1676-1759) and Kim Hong-do (1745-after 1806 ?) are regarded as two leading painters during this period. Based on Southern School paintings of China, Jeong Seon filled his canvas with picturesque scenery of the mountains of Korea, creating a distinctive Korean style. He had the greatest influence of any Korean artist on the development of literati tastes of his time, and this has continued down to the present. One of his masterpieces is “Panoramic View of Geumgangsan.” 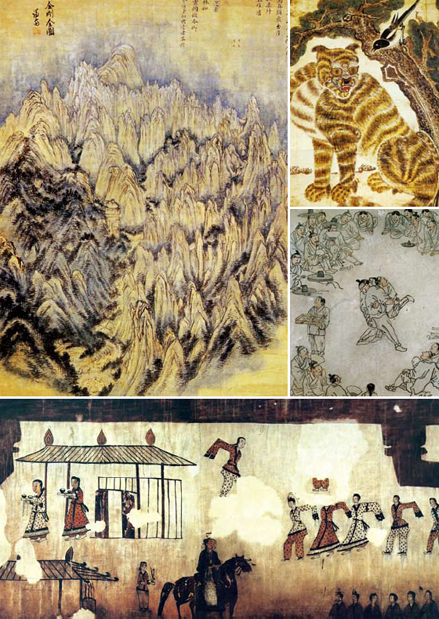 In the meantime, the paintings of Kim Hong-do are greatly valued in that he captured the mundane lives of farmers, artisans and merchants. His precise but humorous depictions stand out. In the late years of the Joseon Dynasty, the styles of painting further expanded. Untrained painters emerged as active producers of folk paintings to meet the demands of ordinary people. These folk paintings featured unconstrained use of vivid colors and boldly simplified and stylized designs.

Following Japan’s forcible annexation of Korea in 1910, the traditional styles of painting were gradually overshadowed by Western oil painting styles that were introduced during that period and later became prevalent. After Korea’s liberation from Japan’s rule in 1945, traditional Korean painting styles were revived by a number of outstanding artists. At the same time, many Korean artists educated in Europe and the United States helped their home country keep up with the contemporary trends of the outside world.

In the 1950s, a government-run institution, the National Exhibition played a leading role in the advancement of Korean art. The National Exhibition had a rather formal and academic atmosphere and tended to choose works that were realistic. Young artists pursuing creativity in their works, therefore, sought an art in tune with the new age. From the late 1960s, modern Korean painting began to change its directions to geometrical abstraction. Other artists took a deep interest in subject matters that conveyed the innate unity between man and nature.

Korean paintings of the 1980s were largely a reaction to the modernism of the 1970s. During this period, artists strongly felt that art should convey a message dealing with current social issues. Since then, there has been an interest in the issues of modernism and post-modernism. 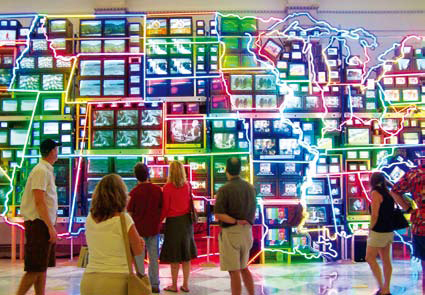 ‘U.S. Map’ by video-artist Paik Nam-june on display in the Smithsonian, Washington, D.C.

In 1995, the first International Gwangju Biennale was held. The event provided an opportunity for modern Korean artists to get together with leading figures from the international art world. Paik Nam-june’s video art was one of the most prominent exhibitions.

In Korea today, both traditional and Western-style painting are taught and pursued, producing one of the most versatile communities of fine arts in the world. Many Korean painters are active in New York, Paris and other centers of contemporary art.