Though people started living on the Korean Peninsula in the Paleolithic Age, existing remains indicate that the origin of fine arts dates back to the Neolithic Age (c. 6,000-1,000 B.C.). Rock carvings on a riverside cliff named Bangudae in Ulsan on the southeast coast feature vivid descriptions of animals and are noteworthy art from the prehistoric age. The aesthetic sense of this era can also be found in the comb and eggplant patterns on pottery for daily use. In the Bronze Age (c. 1,000-300 B.C.), a variety of bronze goods including mirrors, bells and pendants were produced, most of which are presumed to be indicative of authority or designed for religious purposes and were intended to inspire awe. 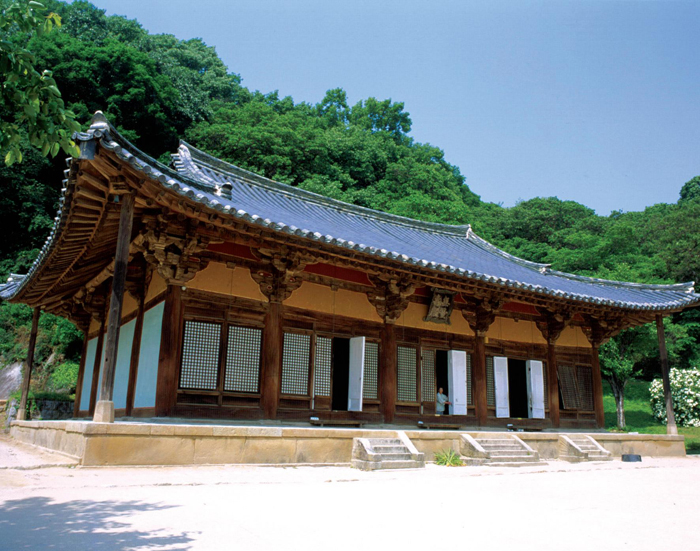 During the Three Kingdoms era, Goguryeo (37 B.C.-A.D. 668), Baekje (18 B.C.-A.D. 660) and Silla (57 B.C.-A.D. 935) each developed different fine arts influenced by their own unique geographical, political and societal circumstances. Mural paintings from Goguryeo tombs, mostly found around Ji’an in Manchuria and Pyongyang, illustrate the art of this kingdom. The murals on the four walls and ceilings of the burial chambers feature figures depicted in brilliant colors and energetic and dynamic movement, illustrating ideas about life on earth and in the afterlife. 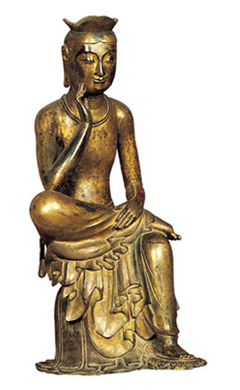 The art of Baekje is best characterized by soft surface treatment and warm smiles as seen in the Buddhist triad carved on a rock at Seosan. Archaeologists uncovered rich collections of gold accessories, including crowns, earrings, necklaces and belts from the tombs of Silla, which are a visible expression of authority. Gold threads and gold granules found in the tombs together with splendid accessories attest to the highly refined artistic skills of this kingdom. In the meantime, the official recognition of Buddhism during the Three Kingdoms led to the creation of Buddhist statues. One prime example is the statue of Maitreya (the Buddha of the Future) sitting in meditation with his finger touching his cheek.

Unified Silla (676-935) developed a polished artistic culture bearing a strong international flavor through exchanges with the Tang Dynasty (618-907) of China. Still, Buddhism served as a strong driving force behind Silla cultural developments. Seokguram Grotto, the quintessence of the fine arts of Unified Silla, is an unrivalled masterpiece in respect to the majestic figures, their realistic expressions and unique features. In addition, Silla artisans also excelled in producing temple bells. Bronze bells like the Divine Bell of King Seongdeok manufactured in the late 8th century are well known for their elegant designs, sonorous sound and impressive size. the white porcelain surface.

The artistry of Goryeo (918-1392) can be best appreciated by its celadon ware. The jade green color, elegant designs and great variety of Goryeo celadon are profoundly beautiful and quite different from Chinese ceramics. Up until the first half of the 12th century, Goryeo celadon was noted for its pure color, while in the second half of the century, the technique of incising designs into clay and then filling the recesses with white or black slip came to stand out as a main characteristic.

The current oldest wooden structure built in this era is Muryangsujeon (Hall of Infinite Life) at Buseoksa Temple in Yeongju, Gyeongsangbuk-do Province. It is presumed to have been built in the 14th century. Wooden architectural designs in this age can be categorized into two major types, jusimpo (column brackets to support the roof) and dapo (multi-bracket sets placed on the lintels between pillars as well as on the columns). The dapo system, in particular was developed for the construction of grand, large-scale structures. These two construction forms remained as the basis for wooden architecture up to the Joseon Dynasty. 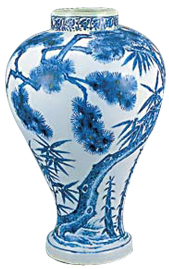 Celadon pitcher in the shape of a tortoise (Goryeo Dynasty)

During the Joseon Dynasty (1392-1910), traditional construction, which sought harmony with the natural landscape, flourished in great variety and sophistication. Sungnyemun (also known as Namdaemun) in downtown Seoul is an especially valued example of the architectural style of the early Joseon Dynasty. It and numerous temple and palace buildings are being rebuilt or restored using traditional methods.

Western architecture was introduced to Korea at the end of the 19th century, as churches and offices for foreign legations were built by architects and engineers from abroad.

Since the 1960s, in Korea’s pursuit of industrialization and urbanization, the government pushed ahead with development plans and a number of beautiful old buildings were demolished and replaced by unsightly structures. However, in recent years, there have been active discussions in this regard as the time-honored concept of harmonizing buildings with nature is revived.