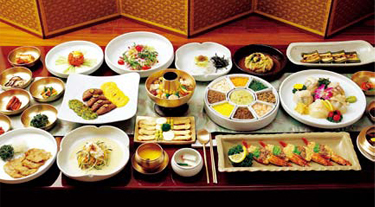 Rice still remains the staple of most Koreans, but among the younger generations, many prefer Western-style food. Rice has been usually accompanied by various side dishes, mostly seasoned vegetables, soup, pot stew and meat.

A Korean traditional meal is not complete without kimchi, a mixture of various pickled vegetables such as Chinese cabbage, radish, green onion and cucumber. Certain types of kimchi are made spicy with the addition of red chili pepper powder, while others are prepared without red chili peppers or are soaked in a tasty liquid. However, garlic is always used in kimchi to add to its flavor.

In late November or early December, Korean families used to prepare enough kimchi to last the long winter. The kimchi was stored in large clay jars partially buried to maintain temperature and retain flavor. In modern Korea, housewives often don’t have time to make kimchi or the outdoor space needed to store large amounts. But kimchi is still a vital part of the Korean lifestyle: companies making the fermented dish and others selling special kimchi refrigerators enjoy brisk sales.

2. Slice and wash Chinese cabbages and soak in salt water.

3. Clean the bottoms of the cabbages.

6. Wrap the whole cabbage and store in a cool place.

In addition to kimchi, doenjang (soybean paste), with its anti-cancer attributes, has attracted the attention of modern-day nutritionists. Koreans used to make doenjang at home by boiling yellow beans, drying them in the shade, soaking them in salty water, and fermenting them in sunlight. However, only a few families go through this process anymore; the majority buys factory-made doenjang.

Among meat dishes, seasoned bulgogi (usually beef) and galbi (beef or pork ribs) are the most favored by both Koreans and foreigners. 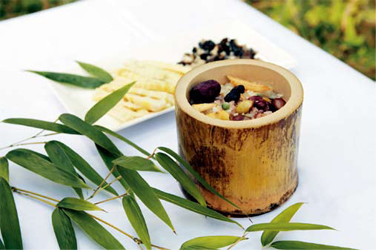 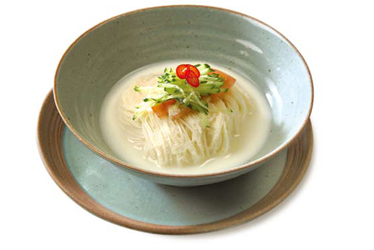 White rice is the most typically consumed rice among Koreans. Freshly cooked white rice tastes great alone, but when served with side dishes it accentuates the tastes and flavors of the side dishes.

Juk is Korea’s oldest food. Grain is boiled in water for a long time. There are various kinds of porridge depending on the ingredients. Porridge is smooth and gentle to the stomach, and highly nutritious, therefore ideal for patients. For the busy people of today, juk serves as great breakfast substitute.

Italian spaghetti, Japanese soba, and Vietnamese rice noodles: countries throughout the world have their signature noodle dishes. Korea also has a great variety of noodle dishes, notably kalguksu and naengmyeon.

Korean soups, also called tang, are made by cooking various ingredients in a pot. Jjigae and jeongol are similar to soup but jjigae is slightly less watery, and jeongol is a meat and vegetable casserole cooked on the table. 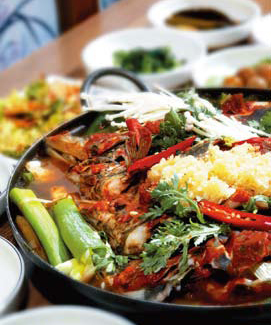 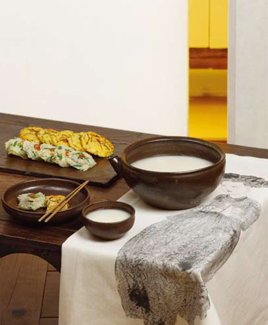 Korean traditional liquor is made by fermenting various grains. The fermentation process is a crucial part of the entire liquor making process for it decides the scent and taste of the final product. Depending on the weather and region it is produced, traditional liquors vary greatly. Fruits and herbs can also be added in order to enhance taste. There are Makgeolli (Traditional Rice Wine), Soju (Korea’s most well-known distilled liquor), and Gwasilju (Fruit Wine).

Korea is surrounded on three sides by the sea and 70% of the land is mountainous. Regions within Korea are bounded by steep mountain ranges and rivers. Climate conditions vary within these regions and there is a great variety of natural produce as well. The physical and climatic variations among Korea’s regions account for the flowering of Korea’s region-specific food culture.

In general, rice is consumed as a main dish, but on occasion, rice is also made into rice cakes. On ceremonial occasions, national holidays, and birthdays, rice cakes are invariably present on the festive table. Made primarily from white rice flour, ingredients such as mugwort, red beans, jujubes, beans and chestnuts are added to provide distinctive flavors.

A tray of tea and cookies or Hangwa is called dagwasang, and it is normally presented at the end of a meal. It can also be served as a treat for guests or as a snack. The teas and cookies vary by season. In autumn, winter, and spring, hot tea is served with various cookies or biscuits made from seasonal fruits. In summer, the cookies and biscuits are accompanied by chilled fruit juices and fresh fruits. 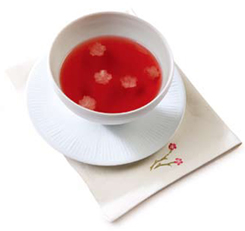 Omija tea made from the fruit of the Schisandra chinensis tree 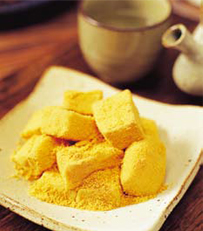