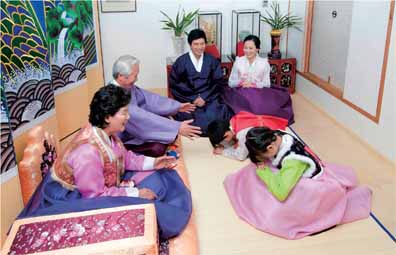 In bygone days, festivals were lavish religious observances. Even before the Three Kingdoms period, harvest thanksgiving festivals were observed officially in the smaller confederated kingdoms. They included the yeonggo (spirit-invoking drums) of Buyeo, dongmaeng (worship of the founder) of Goguryeo, and mucheon (Dance to Heaven) of Dongye. Usually, festivals were conducted in the tenth month, according to the lunar calendar, after harvests were over.

Sebae is the custom of younger people bowing to respected elders as a New Year’s greeting.

The tradition of enjoying the fall harvest and greeting the new year in merriment continued through the later kingdoms and dynasties with each making some modifications. Due to the hectic pace of life today, modern Korea has lost many of its traditional holidays. But a few holidays are still celebrated fervently. One such day is Seollal, the first day of a new lunar year, which falls sometime in late January to late February in the solar calendar. The entire family gathers on that day. Dressed in Hanbok or their best clothes, the family observes ancestral rites. After the ceremonies, the younger members make a traditional deep bow to their elders.

Other major holidays include Daeboreum, the first full moon of the year after Seollal. During this holiday, farmers and fishermen pray for a bountiful harvest and catch, and ordinary households express yearning for a fortuitous year and the prevention of bad luck by preparing special dishes of seasonal vegetables.

The chief element of the Korean tea ceremony is the ease and naturalness of enjoying tea with an easy setting.

Tea ceremonies are now being revived as a way to find relaxation and harmony in the new fast-paced culture.

On Dano, the fifth day of the fifth lunar month, farmers took a day off from the field for joint festivities marking the completion of sowing, while women washed their hair in special water prepared by boiling iris flowers in the hope of preventing misfortune. Dano was a major holiday in the old days, but interest today has greatly decreased except in a few provinces.

A family making songpyeon, half moon-shaped rice cakes, for Chuseok 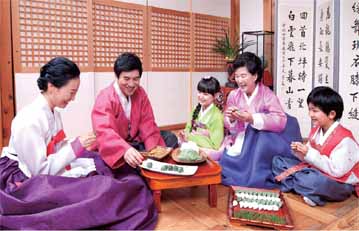 Chuseok, the autumnal full moon day that falls on the 15th day of the eighth month by the lunar calendar, is probably the most anticipated festive day for modern Koreans.

Endless throngs of cars fill expressways and many institutions and stores are closed for three days. Family members get together, pay tribute to their ancestors, and visit ancestral graves. People living in cities return to their hometowns to observe Chuseok. Airplane and train tickets for those returning to their hometowns are usually reserved several months in advance.

Among other festive days are the Buddha’s Birthday, which falls on the eighth day of the fourth lunar month, and Christmas, which not only Christians but most young people enjoy.

For the Buddha’s Birthday, a huge crowd of Buddhists join a lantern parade through the heart of Seoul, and Buddhist lanterns are hung along major streets. 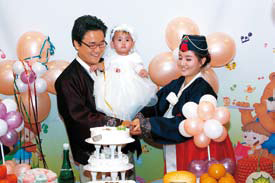 There are several family holidays that are important for all Koreans and that are celebrated with feasting and merriment. They include baegil, the 100th day after a child’s birth; dol, a baby’s first birthday; and hoegap or hwan-gap, one’s 60th birthday, which is considered as the completion of the 60-year cycle of the Oriental zodiac. These special days were observed with much enthusiasm when infant mortality was high and life expectancy was low.

Such occasions were observed as festivals in which even remote relatives attended, but these days they are usually observed by only close family members. As for hoegap, more and more senior citizens are turning to other forms of celebration such as traveling abroad, instead of enjoying celebrations at home. 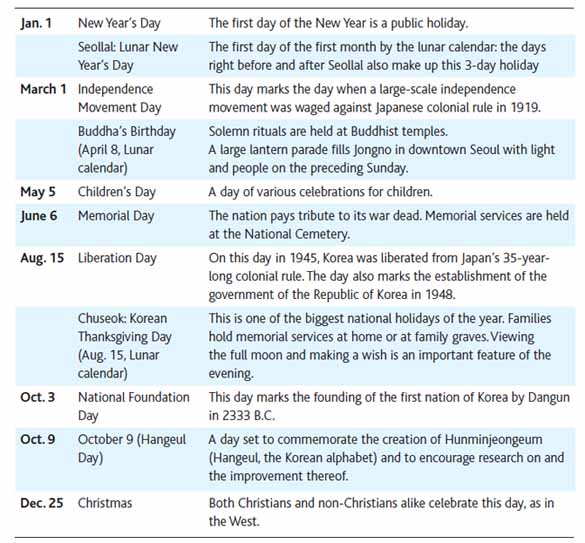