The Fairy and the Woodcutter: tragic love, Korean-syle

The Fairy and the Woodcutter is one of the most popular of all Korean folktales. Almost all children in Korea grow up reading a version of this love story. The story has three well-known versions that differ mainly in plot length. The following is a synopsis of the full version of the folktale. There once was a poor woodcutter who lived with his mother. One day, he helped a wounded deer escape from hunters. As a show of gratitude, the deer informed the woodcutter of a nearby pond where fairies came down from the heavens to bathe every month. The deer pointed out that the woodcutter would be able to marry one of the fairies by hiding the fairy’s winged clothing—her only means of flight. He could then come to the rescue of the stranded fairy. The only proviso: everything was to be kept secret from his wife until they had at least three children. With these instructions, the woodcutter was successful in taking a fairy as his wife, and they had two children together. Content and happy, the woodcutter now felt comfortable enough to prematurely come clean. He showed his wife the winged clothing. Upon seeing her wings again, the wife could not help but feel a pang of yearning for home. She decides to return to the heavens, taking the children with her. With this unexpected turn of events, the woodcutter was highly distraught and once again turned to the help of the deer. This time, the resourceful deer presented the woodcutter with magic beans that would allow him to reach the heavens by way of a very long beanstalk. The overjoyed woodcutter reunited with his wife and triumphantly passed a series of tests that were required of all mortals who wished to live in the heavens. As time went, the woodcutter began to worry about his mother, whom he had left behind on earth. The wife, who understood the woodcutter’s feelings, provided him with a winged horse that would safely take him down to earth and back. The wife also warned the woodcutter never to get off the horse at any point. During the trip, however, the woodcutter spilled his mother’s hot porridge on the horse’s back, and as the startled horse rears up on its legs, he was knocked off its back. The winged horse flew back to the heavens, leaving the hapless woodcutter behind. The woodcutter was never to return to the heavens again. Sad and alone, he later turned into a rooster that crows its grief to the skies. 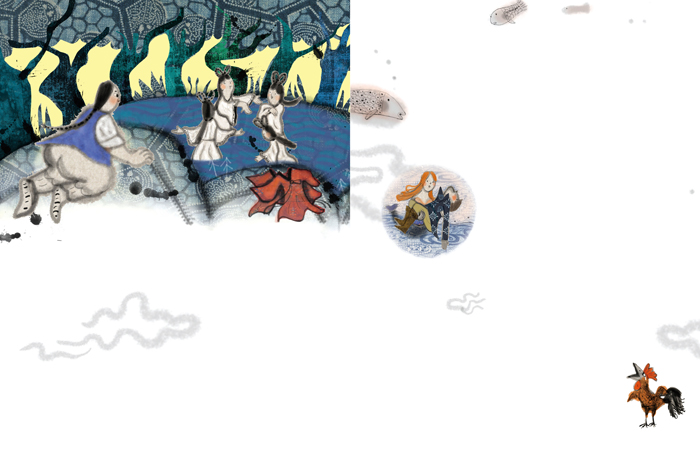 The full version of the Korean folktale is noteworthy because the love story also functions as a pourquoi story. The story wraps up nicely by explaining the possible origin of the rooster’s plaintive crow. In some variants of the story, the woodcutter actually turns into a cuckoo.Like most tragic love stories, The Fairy and the Woodcutter features inherent obstacles the characters must overcome. But this love story is unique in that the tragic ending is not the result of an effort to uphold romantic love. Romantic love makes way for something of greater value to the protagonist: in this case, filial piety. The woodcutter finds love only to risk it all for one last chance to see his mother.In Western tragedies such as Romeo and Juliet or The Little Mermaid, death might have been a way of consummating the forbidden love. The circumstances behind the woodcutter’s undoing, meanwhile, were largely self-inflicted. The Fairy and the Woodcutter is a one-of-a-kind folktale. It contains the elements that define a tragic love story with its own twists and turns. The moral of the story is rather hard to pin down. Some argue the story teaches children to be more cautious, while others like to focus on the woodcutter’s internal struggle of values. The Korean folktale is not only an interesting read; the story itself makes for an intriguing subject of research.*The series of old Korean tales has been made possible with the cooperation with Korea Magazine.