Life Trail follows the path of Catholic martyrs in Seoul

Seoul’s Seosomun Historical Park is where a great number of Catholics were executed amid the persecutions that took place during the Joseon Dynasty (1392-1910). Earlier this year, it was officially designated as a “historical park.” Pope Francis will honor the martyrs during his visit to Korea in August. Out of the more than 100 martyrs who were executed in the park, 44 have been granted sainthood. Seosomun Park and the Seodaemun neighborhood is where the Gyeonggi provincial office was located during Joseon times. Both are places where many believers were martyred. Nowadays, the Life Trail, the second of the three pilgrimage walking routes that weave across Seoul, connects these historic Catholic sites. The course also includes the Kahoe Catholic Church, where Chinese priest Zhou Wenmo (Ju Mun-mo) Jacobus, the first missionary to Korea, celebrated Mass; the Yakhyun Catholic Church, Korea’s first Gothic church; and the police station, or Upodocheong, where the very last Catholic martyrs in Korea died. 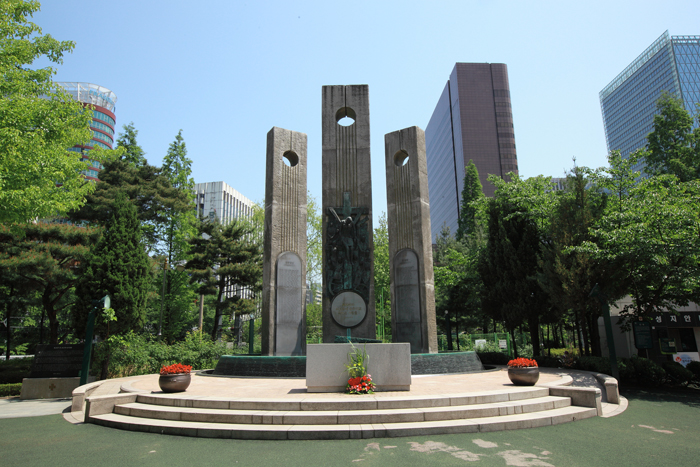 The Seosomun Martyrs’ Shrine pays tribute to 103 Catholic martyrs. (photo courtesy of the Archdiocese of Seoul)

Seosomun Gate was located between the two larger gates, Seodaemun and Namdaemun, which were the two main entrances to the capital during Joseon times. A plaza outside Seosomun Gate was used for executions ever since the beginning of the dynasty. The plaza formed a crossroads, with a lot of traffic. It was also close to the police station where prisoners were held. During the great persecution of 1810, Catholics were martyred in the plaza for the first time. Peter Yi Seung-hun, the first Korean to be christened, and Augustine Jeong Yak-jong, who led the Myeongdohoe theological study group, were martyred here. Many followers were martyred outside Seosomun Gate, and 44 of them have since been granted sainthood, the largest number from any single martyrdom site across the country. In 1999, the Seosomun Martyrs’ Shrine was built to pay tribute to the 103 martyrs who died in the plaza. The three granite memorial towers are shaped like execution rack used during Joseon times and symbolize death and persecution. Seven vertical golden lines are engraved on each tower, representing kindness. 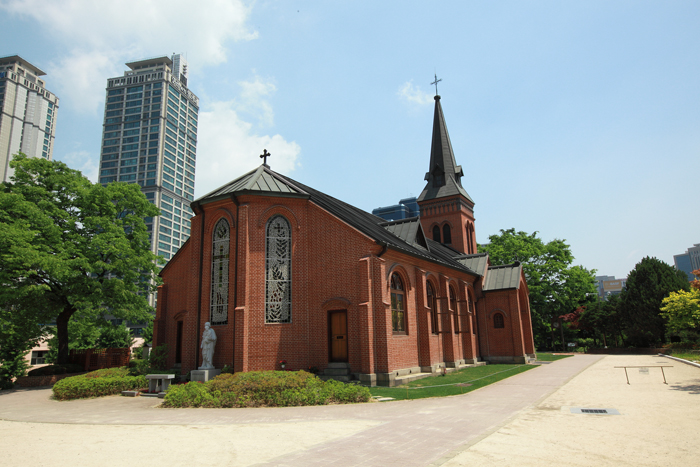 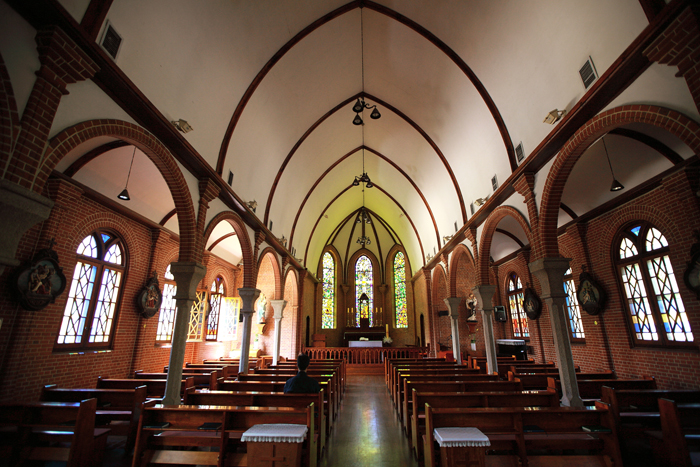 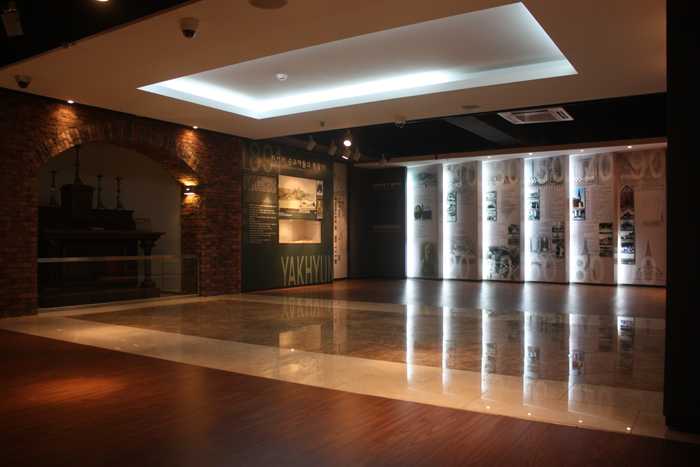 (Top, middle) The Yakhyun Catholic Church is Korea’s first Gothic church and first brick church. (Bottom) There is an exhibition hall at the church commemorating the martyrs who died in Seosomun Historical Park. (photos courtesy of the Archdiocese of Seoul)

The Yakhyun Catholic Church, which oversees the Seosomun Martyrs’ Shrine, was built six years before the Myeongdong Cathedral, whose construction was completed in 1898. The historic church is Korea’s first Gothic church and first brick church. It was completed in November 1892 and has since become a model for brick-made churches built afterward. In 1991, a memorial hall was built to mark the 100th anniversary of the parish and it has books, artifacts and the belongings of many of the martyrs. The Gyeonggi Gamgyeong is where the Gyeonggi provincial governor’s office used to be. The Gyeonggi provincial office was established in 1393, during the second year of King Taejong’s reign (r. 1400-1418), and was later moved to this location. Many followers from Yanggeun and Yeoju in Gyeonggi-do (Gyeonggi Province), including Peter Jo Yong-sam, were brought here and subjected to torture and incarceration. Jo was baptized in the prison and died there on March 27, 1801. When he was tortured for the last time, just before his death, he spoke of his faith. “There are not two masters in heaven and a person cannot have two different beliefs. What I want is to die once for God and there is nothing else to say.”

The Uigeumbu was a government office where offenders were interrogated under the king’s orders. Serious criminals, including Catholic bishops, priests and other leaders, were transferred to the Uigeumbu. Peter Yi Seung-hun and Lee Jonchang Louis de Gonzague, the “Apostle of Naepo,” were also questioned there. The Hyeongjo is one of the central government offices from Joseon times. Ever since the Catholic Church was established in Korea, many followers were brought there for interrogation. The Jeonokseo was the public office responsible for managing prisons. Many Catholics were interrogated at the Hyeongjo and they were kept at the Jeonokseo until their punishment was carried out. St. Ignatius Kim Je-jun, father of St. Andrew Kim Dae-geon, was confined in the Jeonokseo before he was transferred from the Hyeongjo to the Uigeumbu and then executed.

(From left) The sites of the Upodocheong, the Jeonokseo and the Hyeongjo (photos courtesy of the Archdiocese of Seoul)

The Upodocheong, or the “right-hand” police bureau, dealt with western and northern Seoul, as well as Gapyeong, Kaesong, Goyang, Paju and Pocheon. Father Victor Marie Deguette and his followers were arrested in Gongju, Chungcheong-do (Chungcheong Province), on May 14, 1879. He was then transferred to the Upodocheong. Officially, the persecution against Catholics ended then and they were not subjected to any torture. However, Father Deguette and others did suffer from starvation. In the end, many believers died of hunger and they were the last martyrs in the history of the Catholic Church in Korea. The Kahoe Catholic Church, which is at one end of the city’s Life Trail walking course, is in Gye-dong, northern Seoul. Chinese priest Zhou Wenmo (Ju Mun-mo) Jacobus, the first missionary to arrive in Korea, on December 24, 1794, celebrated the first Mass in Korea the following year. Father Zhou learned the Korean alphabet from a follower in the area. Before long, Zhou and his flock were arrested and subjected to harsh treatment at the Upodocheong. Zhou was eventually martyred on June 28, 1795. The Kahoe Catholic Church is in Gye-dong, northern Seoul. The neighborhood is where Chinese priest Zhou Wenmo (Ju Mun-mo) Jacobus, the first missionary to Korea, once celebrated Mass during the 1790s. (photo courtesy of the Archdiocese of Seoul) 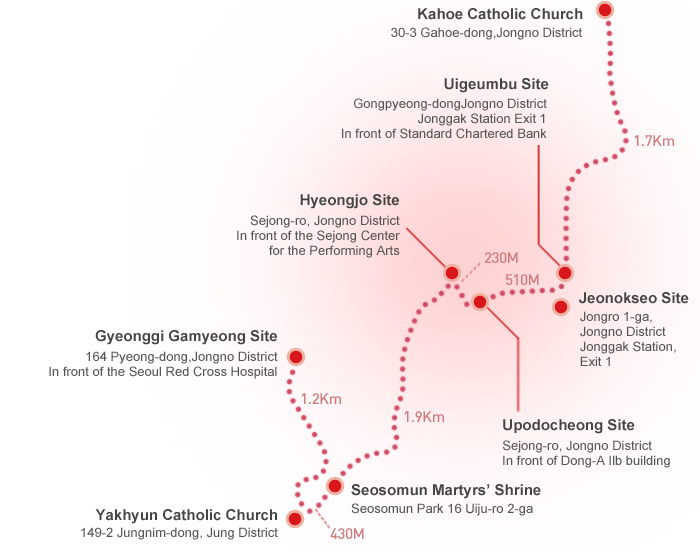 A map of the Life Trail