Traditional markets are window into the lifestyle of the people

Koreans use the expression saram naemse, “the smell of the people,” to express the feeling of being surrounded by humanity. This sense of being together as one with a crowd, even in the absence of a relationship between each individual, is an important part of Korean culture. When people seek this scent of humanity, one of the first places they go to is the local sijang, or market. 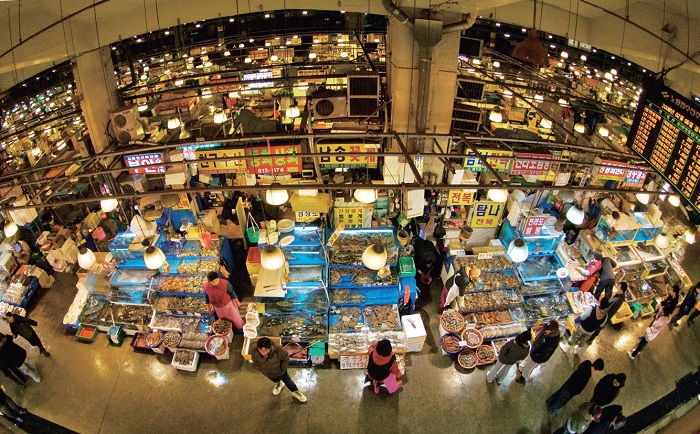 Markets have always been a gathering place where people engage with each other, whether it’s by trading tales or trading merchandise, and Korea’s markets remain a vibrant part of the social and commercial scene today. From the gigantic Jagalchi Seafood Market in Busan to the technology-driven Yongsan Electronics Market in Seoul to the tiny neighborhood markets that dot cities and towns all across Korea, they are a place to truly appreciate the “smell of the people.” By bringing together the people who grow and make things with the people who will use them, markets build a sense of unity and tie together people and products into one community. 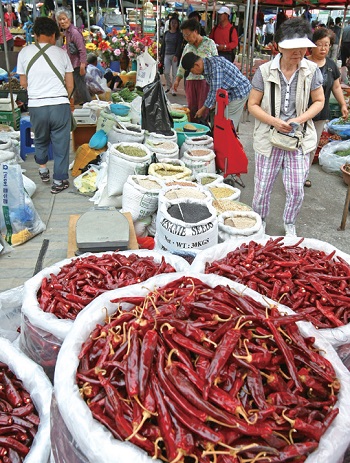 The Art of Haggling
Korean markets, whether large or small, require some special skills. As fixed prices have become the norm and big box stores can be found everywhere, the art of bargaining may not be exercised much in contemporary life. However, it’s alive and well in the marketplace. While initially intimidating, negotiation is expected. Instead of being an adversarial encounter, though, it’s usually a friendly exchange. A good but not greedy haggler commands respect, and merchants enjoy the back-and-forth as they explain their wares and justify their prices. Sellers can also offer tailored suggestions, whether it’s the right fabric for a suit or the best kind of bean paste for a particular sauce. The social nature of the marketplace brings both sides together as friends for a few moments, and many merchants reward repeat shoppers with the pick of the lot or a little extra thrown in.Marketplaces are often lively with noises and sounds that are hard to find in contemporary cityscapes. Fresh produce piled together gives off enticingly earthy and green smells, and seafood markets bring inland the tangy brine of the sea. The sounds are also specific, since many peddlers and vendors use song, rhythmic clapping and chanting to advertise their wares. All vendors have their own unique calls and patterns. Imploring passersby to buy, they sing out the specials on offer, clapping to make enough noise to be noticed above the general bustle. Even outside the markets, chanting, calling and clapping has become part of advertising. From the small trucks that roam urban neighborhoods with food and produce to even the employees of big box and department stores. They all try to recreate the busy hum found in traditional markets.The Development of the Traditional MarketBefore the use of currency became widespread, markets functioned as a way people could arrange the trade of goods and services, saving time and effort. They also became places for people to share news and gossip. Markets grew with cities and towns, and soon people began to move around to sell goods at different markets, leading to the rise of professional peddling. These peddlers were essential sources of news and information in the days before the spread of modern media.The tradition of markets and market days has carried into the present. Especially in Korea’s smaller towns and in the countryside, weekly markets remain an important part of rural life. Usually meeting every five days, these markets are often filled with a variety of produce and agricultural items, along with a variety of sundry items for daily living, such as clothes, pots, pans, soap and cleaning supplies.These five-day markets are still one of the most lively and colorful ways to experience country life firsthand. Most local areas in Korea have at least one, and many areas host several different markets on different days. People flood into town to enjoy themselves in the festive atmosphere a traveling market brings. Sleepy spots come to life as roving peddlers, local merchants and ordinary people come together to shop, gossip and bask in the energy the market brings. It’s also a chance for each area to highlight its specialty products and foods, as well as to introduce these products to a wider audience.The subtropical island province of Jejudo has some ten markets of this type, with vendors traveling between the main cities of Jeju and Seogwipo, as well as smaller villages around the island, often hitting a different market each day.Visitors might run into a market anywhere from a remote fishing port to the middle of downtown Jeju, but should never pass them up, because each offers an unsurpassed chance to really mingle with the local scene and to get a glimpse into how the people of Jejudo really live. Jejudo isn’t the only place to find these markets, however, as they make the rounds of every province in Korea. Moran Market in Seongnam, Gyeonggi-do, is the largest of these five-day markets, with more than 1,200 vendors regularly gathering to sell everything from flowers to livestock. The schedules for markets across the nation are now often posted online, allowing both residents and visitors to make plans ahead of time. 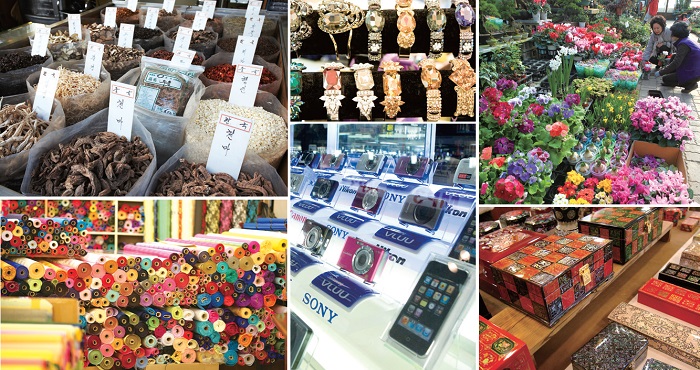 New Markets and New IdeasNot all markets in Korea fit the traditional mold. Combining old and new, farmers’ markets have been springing up to help small-scale and organic farmers bring their produce directly to urban consumers. These farmers also often join forces with artisan food producers, craftspeople and artists to create a neighborhood market. There is the Marché held in Seoul’s Daehangno district, the weekly combined citizens’ flea and farmer’s market in Gwanghwamun Square, and the Hongdae Free Market. The latter requires vendors to only sell original, handmade pieces, letting people meet the artist directly and learn about the creative process. This invaluable connection between maker and consumer helps customers understand the real value of what they buy, while makers find joy in knowing the things they have worked so hard to produce will be appreciated. The IT sector has stepped up to make traditional markets more accessible and efficient. KT sent out teams to help train merchants in social media, to extend their presence online. They also help vendors manage supplies using smartphones and bring their technology up to date so they can compete with large retailers. Some markets have started using touch-screen displays to help people find their way around. Apps like “Our Charming Market” help people find what’s available at their local traditional markets, provides notifications about upcoming events and specials, keeps track of points from merchants that can be redeemed for discounts and can even be used to arrange for home delivery.Traditional markets aren’t just a part of Korea’s history, but a vibrant and particular part of the present and future. They tie together traditional culture and experiences with people’s modern lives, while also tying individuals and communities together. To visit a market is to get a real sense of people’s daily lives and to truly inhale the scent of humanity.* Article from Korea Magazine (July 2014)[/vc_column_text][/vc_column][/vc_row]