Before the opening of Korea to western diplomats and businessmen in the 1880s, there were two visits that, rather than helping prepare for the opening, encouraged the Koreans to turn their backs on the outside world. The first was that recorded by the French artist Jean Henri Zuber, (1844~1909) in an article published in France in 1873. In September 1866, three French ships set out from China for Korea, where nine French Catholic missionaries had been executed in a great persecution that year. The French reached Korea at Ganghwado Island. Two ships sailed up the Hangang River as far as Mapo, but could not establish contact with the authorities, so returned to Ganghwado Island where they stayed until November 22. One ensign on the expedition’s leading ship, the Primauguet, was Jean Henri Zuber, who left the navy upon returning to France in 1868 and became a noted artist. He published a fascinating account of Ganghwa, “Une Expedition en Corée,” in the periodical Le Tour du Monde illustré in 1873. It was illustrated with engravings based on the drawings he made during his stay in Korea. What makes his account especially interesting is that, as he says, he, “passes lightly over the military acts and focuses instead on the geographic and picturesque parts.” He describes what he saw of Korea with obvious sympathy and interest, and as an artist, in considerable detail. His account includes the fact that the beautifully illustrated books they discovered in Korea and took home with them—the royal copies of the Uigwe Archives—were deposited in the French National Library. It may have been Zuber who, as an artist with an eye for beautiful paintings, persuaded the French to take the Uigwe instead of burning them. During the month of October 1866 there was little military action and Zuber was enchanted by the beauty of the Korean autumn landscape. 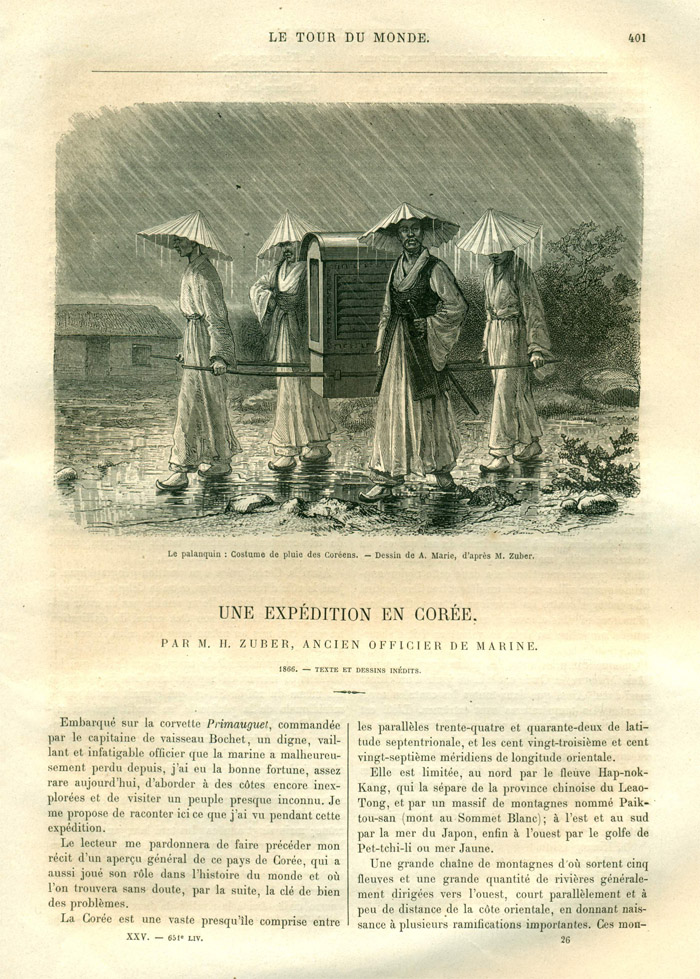 His account includes a translation of the message from the king of Korea demanding their withdrawal. In Zuber’s account, he does not mention any military action at all. Yet it seems that he was leading the small group of soldiers that approached the fortress walls surrounding Jeondeungsa Temple, in the southern part of Ganghwado Island, on November 11, 1866, under the impression that it was unguarded. They suddenly came under fire, some were wounded, they lost their lunch, and they went running back to headquarters where this incident helped convince the leader of the expedition, Admiral Roze, that they ought to leave. In addition to his written account, Zuber prepared a complete map of Korea using the measurements the French had made around the mouth of the Hangang River and along the central west coast. He was mainly working as a cartographer during the expedition. These he combined with a Korean map that the French discovered on Ganghwado Island, with translations of the Korean text by the surviving French priests, and presented this work with a brief commentary to the French Société de Géographie in 1870. This map was a great improvement on any that had previously been available. 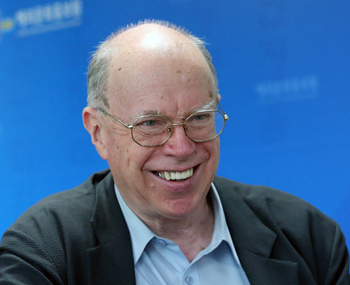 In stark contrast to Zuber’s idyllic vision of Korea, Ernst Jakob Oppert (1832 –1903) was a German businessman living in Hong Kong at the time. Being in financial difficulties, he visited Korea a number of times in secret and is best remembered for his notorious attempt in 1867, helped by Brother Féron, one of the French priests who survived the persecution, to rob the tomb of the regent’s father in order to blackmail the regent into removing Korean trade barriers. This incident ended in an armed confrontation. After returning to Germany, he published a lengthy illustrated book about Korea in 1880, both in German and in English: “A Forbidden Land: Voyages to the Corea.” This was the first volume entirely devoted to Korea ever published—apart from Charles Dallet’s“Histoire de l’Eglise de Corée” published in French in 1874—and it shows considerable scholarly knowledge of previously published descriptions. It therefore served to make Korea better known at a time when almost nothing had been published about it in Europe, despite the troubled personality of the book’s author. The texts that he quoted and summarized were often very hard to obtain. Oppert’s attitude, that of a pragmatic businessman, foreshadowed the impending opening of Korea, although his enterprise, like that in which Zuber was involved, had for a time the opposite effect. The German and the French attacks, as well as that by the USA a few years later, only hardened opposition to any contact with the outside world. Another 10 – 15 years had to pass before treaties were signed and foreigners could freely enter and discover Korea. By Brother Anthony (An Sonjae) President, RAS KoreaDiscover Korea with the RAS[The Royal Asiatic Society Korea Branch, founded in 1900, is an association of people, Koreans and non-Koreans alike, who wish to deepen their knowledge of Korean life, culture and history, and share that knowledge with others in English. https://www.raskb.com/ ]