The 2014 International Congress of Mathematicians (ICM) is set to take place at COEX in southern Seoul from August 13 to 21. The ICM is one of the largest congresses in the mathematics community, attended by around 5,000 professional mathematicians every four years. Congress participants gather to share their past progress and to exchange opinions about the future direction of mathematics. 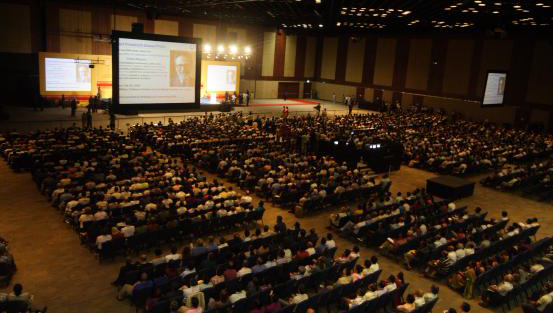 The 2014 International Congress of Mathematicians is set to take place in August in Seoul. Pictured is the opening of the 2010 ICM in Hyderabad, India. (photo courtesy of the Seoul ICM 2014 Organizing Committee)

Marking its 27th session, this year’s congress in Seoul will be held under the slogan of, “Dreams and Hopes for Late Starters.” More than 3,600 people from across the globe have shown an interest in this academic congress, including scientists from Africa, Eastern Europe, Latin America and Southeast Asia. Kim Dong-su from the Department of International Exchanges of the Executive Organizing Committee said, “A greater number of people from countries in Africa and Southeast Asia have submitted applications, wanting to build some advanced information in the field. Congress participants are expected to contribute to the future of mathematics when they go back to their country.”

Indian President Pratibha Patil and winners of the Fields Medal attend the opening and award ceremony of the 2010 ICM, held in Hyderabad, India. (photo courtesy of the Seoul ICM 2014 Organizing Committee) 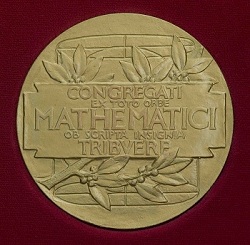 The highlight of the congress is the Fields Medal awards ceremony. In honor of Canadian mathematician John C. Fields (1863-1932), the Fields Medal is granted to those who have made an outstanding contribution to the field of mathematics. Following Fields’ wish and concern for future achievements, the award has an age limit of 40 years old. Recipients are kept secret until their names are called out during part of the opening ceremony, and the medal is awarded by the head of state of the host nation. On the congress’ first day, after the Fields Medal awards ceremony, a public lecture will be given by James Simons, a U.S. mathematician, hedge fund manager and philanthropist. He is known for leading a life heavily influenced by mathematics. Simons worked briefly as a professor in his 20s at Harvard University, but soon voluntarily quit the job. He worked with the U.S.’s National Security Agency (NSA) at one point, too, and was fired. In the 1970s, Simons applied some mathematical models to investing and to fund management, raking in huge profits. Today, he runs a charitable organization that supports projects related to education and health, as well as to scientific research. Congress attendees are eagerly awaiting his speech, as this is his first public lecture after his successful investments. During the course of the congress, a series of keynote speeches and lectures by guest speakers will take place on a daily basis. On August 14, Professor Hwang Jun-mook will give a keynote speech, the first time for the congress to be addressed by a Korean. A wide variety of cultural events will be held on the sidelines of the congress. Visitors will have the chance to watch films related to mathematics and to share their views on the stories with previous winners of the Fields Medal. There are games that mix mathematics and baduk, or go, and games which create a three-dimensional image using a touch screen. There is also what’s been called the “Ask Math” session, which helps provide answers to questions posed by parents. 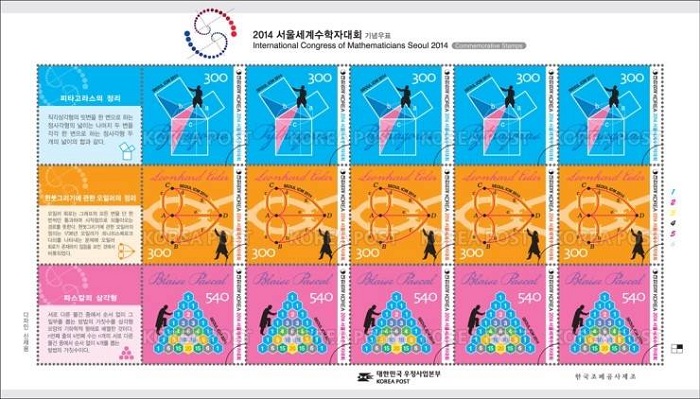 Stamps produced in celebration of the ICM, to be held in Seoul in 2014. (photo courtesy of Korea Post)

* More information about the congress can be found at its website:(https://www.icm2014.org)