A center for agricultural cooperation between Korea and the Dominican Republic recently opened in Santo Domingo, the country’s capital. The establishment of the new KOPIA center, an abbreviation for the center for the “Korean Project on International Agriculture,” was created as a result of an agreement reached between Korea and the Dominican Republic. Last December, both countries signed a memorandum of understanding to cooperate on the agricultural sector. The opening ceremony for the new agricultural center was held on July 10. It was attended by high-ranking Dominican officials, including Vice Minister of Agriculture Claudio Jiménez and Deputy Minister for International Cooperation Inocencia Garcia Javier. President Chun Hye-kyung of the National Academy of Agricultural Science (NAAS) said, “Through the KOPIA center, we will make an effort to develop tailored technologies for local farming villages. These technologies include nutrient solution cultures designed to grow vegetables in facilities and disease-, insect- and pest-control technology to boost productivity.” Chun added that Korea will carry out cooperation projects covering agricultural technology development with the Dominican Republic by conducting technology transfer pilot projects, providing invitational training programs for Dominican scientists and by sending Korean experts to the Caribbean country. 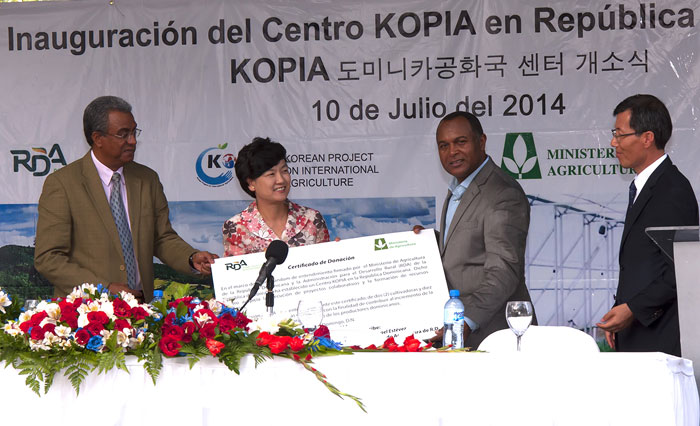 NAAS President Chun Hye-kyung (second from left) offers a symbolic donation certificate for agricultural machinery to Dominican Vice Minister of Agriculture Claudio Jiménez at the opening ceremony of the KOPIA center in Santo Domingo on July 10. (photo courtesy of the Rural Development Administration) 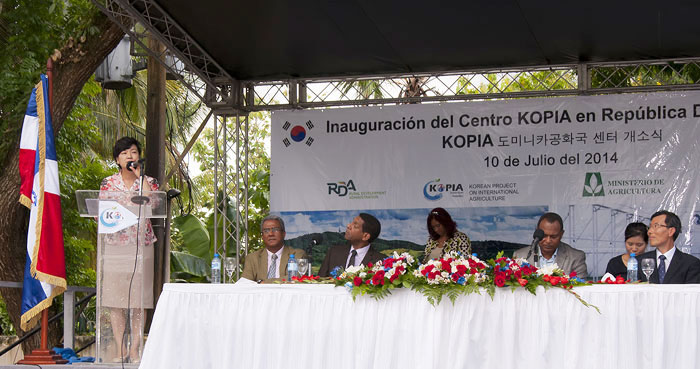 Korea’s Rural Development Administration (RDA) will send agricultural experts to the newly opened KOPIA center. Korean university students majoring in agricultural sciences will also be able to stay in the country for longer periods of time as researchers on the cooperation projects, to help develop localized farming technology. The students will also carry out cooperation projects to enhance productivity and farmer income, and work on the agricultural machinery donation project. Korea has so far opened KOPIA centers in a total of 20 countries worldwide: eight in Asia, including Vietnam, Mongolia and Cambodia, six in Africa, including Kenya and Algeria, and six also in Central and South America, including Ecuador and Bolivia.