One of the best ways to spot spring’s arrival in Seoul—after the cherry blossoms—is the increased traffic on the city’s bike paths.

Bicycling on Korean roads can be frightening, but despite some street-level shortcomings, Seoul and its surroundings offer a vast array of bike-friendly resources. Nearly any part of the city is accessible on two wheels. 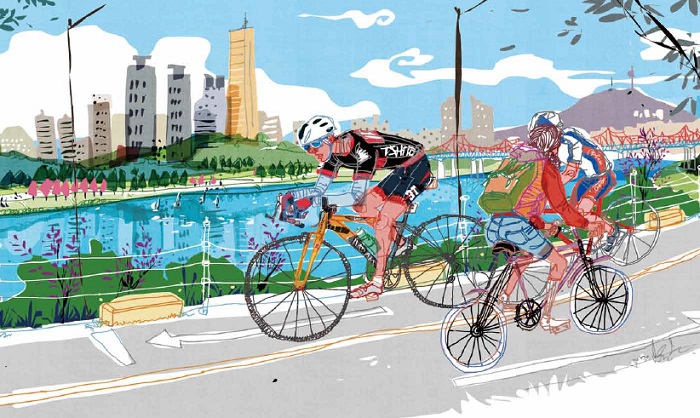 The Hangang River is the center of cycling in Seoul, bisecting the city on an east-west axis and flanked by parks and bicycle paths. Navigating the sheer number of people exercising on the paths on a sunny day can be a daunting proposition, but traffic tends to move leisurely, with plenty of room for faster riders to get by.

Acquiring a bike is the first step to riding it, and Seoul’s bike facilities make that an easy task. At least six racks on both the north and south sides of the Hangang River, accessible with a quick walk from a nearby subway station, offer free bike rentals for two to three hours, with instructions in English and only a government-issued identification card needed as collateral. Several other rental facilities along the river charge fees of around KRW 3,000 per hour. For more permanent ownership, Seoul’s Craigslist maintains an active market for buying and selling bikes in English.

Hangang River cyclists need not worry about lugging supplies with them as they ride. The same facilities that rent bicycles also carry basic bike repair tools. Convenience stores, seemingly omnipresent across Seoul’s urban landscape, are also common along the Hangang River bike paths. Best of all, local restaurants deliver food right to the parks—though the ability to speak and understand Korean is probably a prerequisite.

The area around Yeouido, near the geographical heart of Seoul on the south side of the Hangang River, is easily the most heavily used section of bike path in the city. It can be a dangerous area for riders, as tiny children charge blindly onto the path, couples meander obliviously in front of cyclists, and first-time riders try out their rented tandems, but it’s a friendly space, with even the fastest riders slowing down and using their bells liberally. An abundance of bike rental stands, convenience stores and open green space, as well as springtime cherry blossoms, explain the area’s popularity.

The paths along the Hangang River are generally flat and offer incomparable views of some of Seoul’s most iconic buildings and bridges. Riders who want to go further and maybe climb some hills, however, need only turn onto one of the river’s tributaries and head out of the city. Four smaller rivers enter the Hangang River in Seoul, and just like the river they empty into, they are flanked by bike and walking paths, usually separated from the street. Every Hangang River tributary that runs through Seoul connects the capital to some of its satellite cities in Gyeonggi-do.

Follow those streams far enough, and the cities will peter out into low-rise buildings and eventually farmland.

Riders looking for a real heart-rate boost can look no further than Seoul’s streets. Find a straight road— it’ll turn or end unexpectedly. Find a flat stretch—it’ll suddenly climb straight up at a grade that seems to demand switchbacks. Find a low-traffic area—a delivery scooter will zoom by within inches. For riders who want to avoid such excitement, the paths along the Hangang River and its tributaries are well maintained and convenient areas to exercise, relax and see another side of Seoul.