Football is a sport that certainly has the power to bring people together.

On the morning of June 18, cheers and shouts from spectators of all sexes and ages heated up the brisk summer morning of the city, as they all fixed their eyes on the large screen above them in Gwanghawmun Square, central Seoul.

From the wee hours of the morning, they flocked to the square to root for the Korean national football team which was to face off against Russia in its opening match of this World Cup. 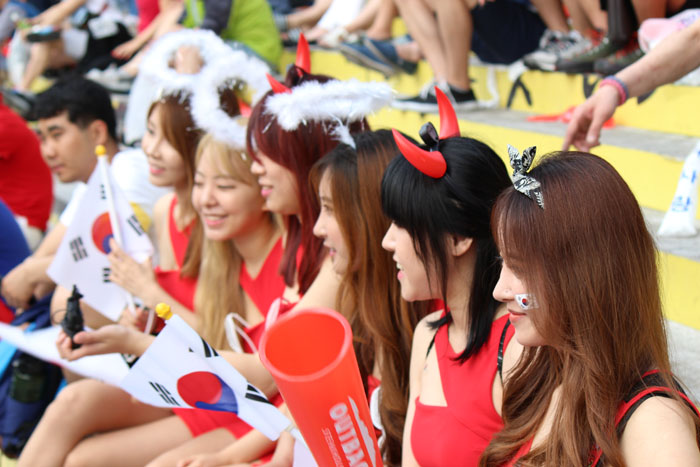 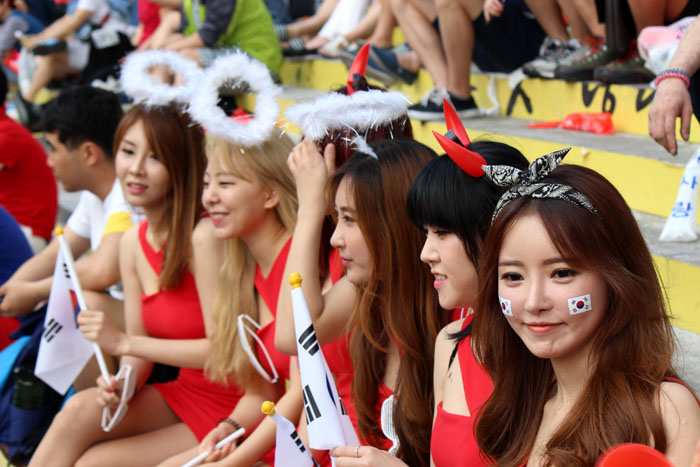 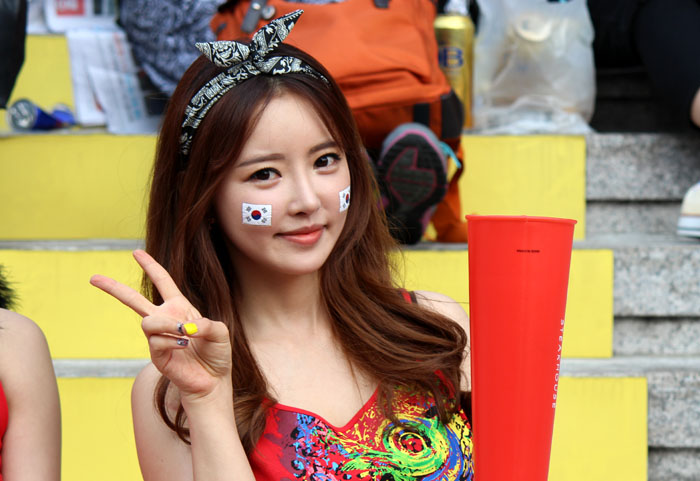 The gathered fans soon drew closer, strangers coming together to share the moment and to celebrate every step and pass of the national football squad.

It is expected to be difficult to beat the formidable Russian team. Against all odds, though, the national team was able to put up a good fight.

Throughout the first half, leading the play slowly and calmly, the national squad remained strong, both on offense and defense, blocking all the opponent’s attacks and penetrating deep into the Russian zone. There was a fierce fight going on between midfielders of both teams, who wouldn’t budge an inch. 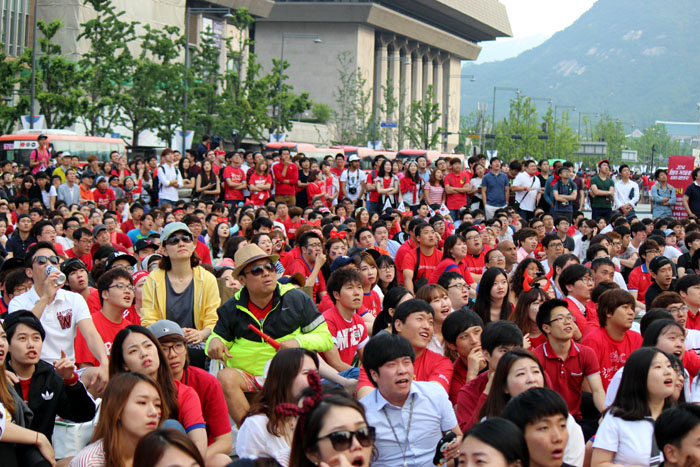 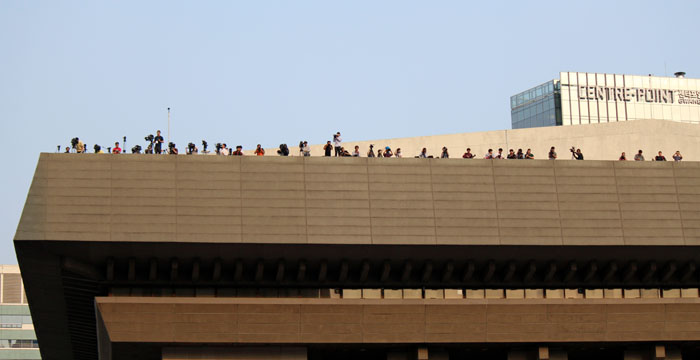 Football fans (top) gather early in the morning in Gwanghwamun Square to cheer for the Korean national football team as it faces off against Russia, on June 18. On the rooftop of the nearby Sejong Center for the Performing Arts (bottom), media cover the crowds watching the Korea-Russia match. (photos: Wi Tack-whan) 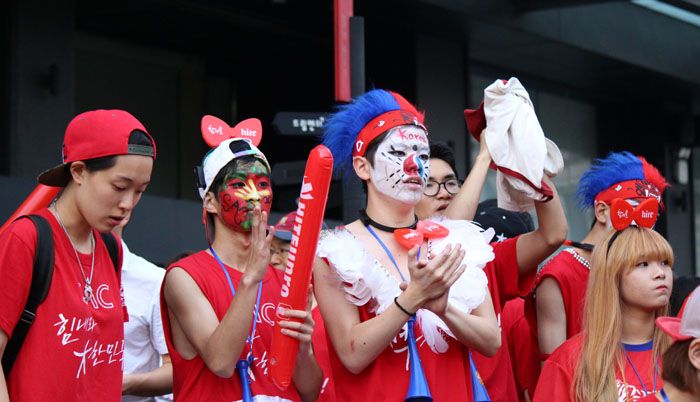 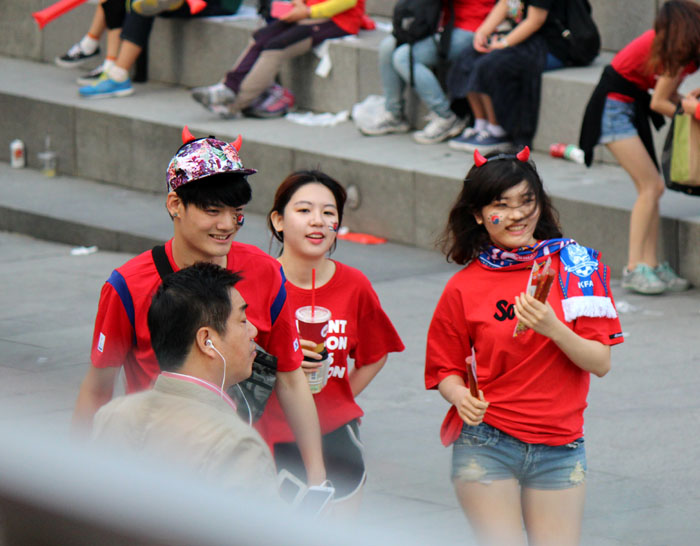 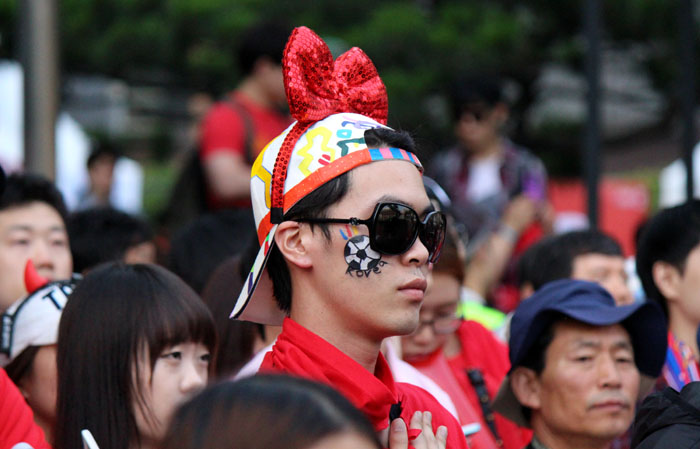 Nine minutes into the game, midfielder Lee Chung-yong launched a powerful header off a corner kick, but it flew way over the net.

After a scoreless first half, the game came to life in the second half as the Korean team came out more aggressively, attempting all angles of attack. The opposing team, too, responded forcefully, engaging in a strong counterattack.

The well-rested substitute shook the net in the 68th minute as he shot the ball with his right foot straight from the box and scored. The Russian goalkeeper, Igor Akinfeev, got his hands on the ball, but then let it fly into the net.

The lead, however, was short-lived, as Aleksandr Kerzhakov, a substitute for Russia, fired an equalizer six minutes later amidst a mad pinball scramble in front of the Korean net. Both teams kept knocking on each other’s doors, but the match ended with a draw of 1-1. 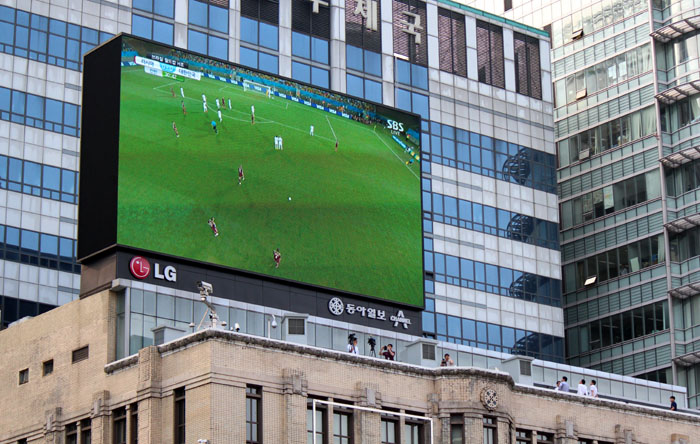 Let down that it wasn’t a win, the fans on the street gave a big round of applause for the players, for their unexpectedly well-fought battle. Also with this result, the fans’ expectations are now raised for the next match, against Algeria at 4:00 a.m., Korea time, on the morning of Monday, June 23.

In the end, both the Korean and Russian squads did their best, regardless of the result. Their play was incredible enough to bring delight, pleasure and excitement to fans from both countries and from around the world, stretching from the depths of Brazil all the way to Seoul on this early summer morning.