A major boulevard in southern Seoul was filled with the cheers of football fans who came out to show their support for the Korean national soccer team in the 2014 FIFA World Cup in Brazil.

On the morning of June 18, over 18,000 people gathered in the middle of the Yeongdongdae-ro boulevard in Gangnam District to watch the game between Korea and Russia, the national team’s first game in Group H. Beginning in the early morning, students, white collar workers, families and international residents all cheered for the national soccer team. Wearing red T-shirts from the national team’s official cheering squad, the Red Devils, the crowds didn’t show any sign of fatigue, even after having stayed up all night.

Psy’s concert, starting at 6:00 a.m., further energized the crowd. Everyone watching waved inflatable air sticks and sang along with Psy, who performed his hits including “Right Now,” “Gentleman” and “Gangnam Style.” The concert continued for 40 minutes and the cheering entered a festive mood as the football match was to kick off at 7:00 a.m. 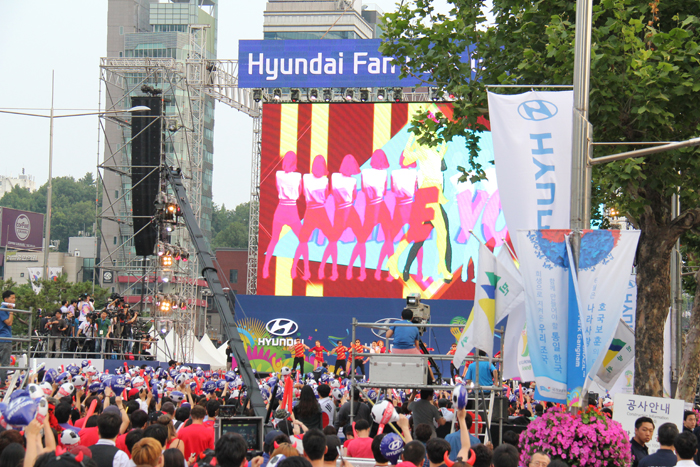 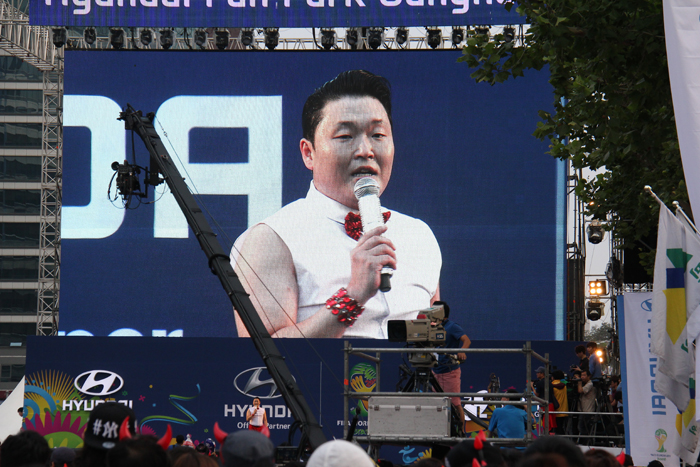 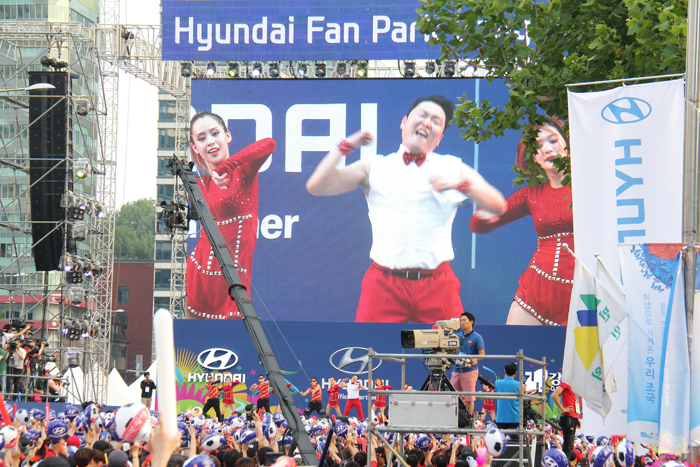 Psy performs before the Korea-Russia match. He sang his hits, including ‘Champion,’ ‘Gentleman’ and ‘Gangnam Style.’ (photos: Limb Jae-un)

“I released the song ‘Champion’ in 2002, just in time for the World Cup in Korea and Japan. Ten years later, I had a huge hit with ‘Gangnam Style,'” Psy said. “Nowadays, I’m putting a lot of effort into doing better than I did with that song. This is the first time for me to actually sing ‘Gangnam Style’ in Gangnam District.” 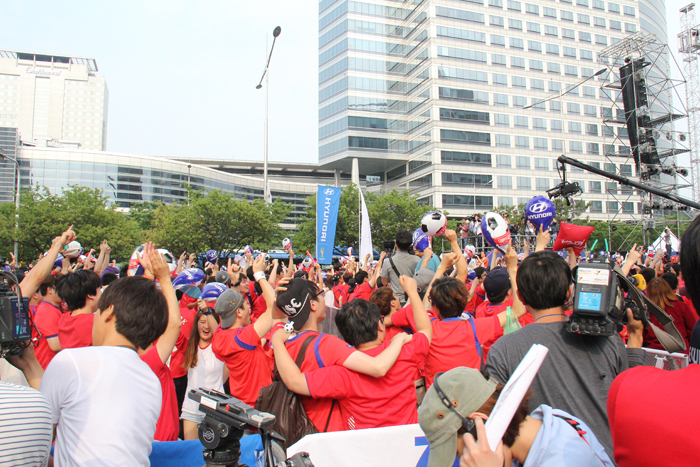 Spectators get to their feet and cheer after Lee Keun-ho scores the first goal at 22 minutes into the second half. (photo: Limb Jae-un)

“I came here to cheer for the national team and to be part of the crowd,” said Lee Hwa-young, a young fan. “I feel like Korea is going to win the game.”

“It’s fun to watch a concert by a Korean artist as well as the game,” said Lukas Bench, a German exchange student majoring in international business at Chung-Ang University. “In Germany, Psy was also quite popular with ‘Gangnam Style.'”

Seven north-bound lanes of the Yeongdongdae-ro boulevard, between the KEPCO headquarters and COEX, were blocked off to give way to the cheering crowds and were closed to traffic since 10:00 p.m. the night before. According to government statistics, 8,000 people were gathered there by 4:00 a.m. in the morning. The number grew to 15,000 by 6:00 a.m., and rose to 18,000 by 8:00 a.m., halfway through the match. At full time, the game ended with a 1-1 tie. 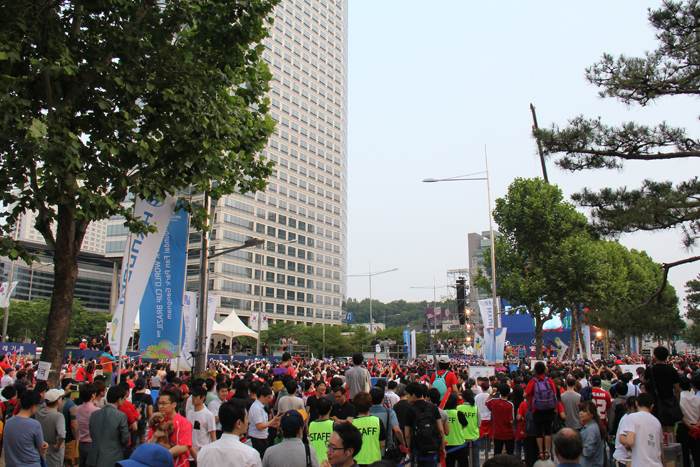 Football fans gather in the street to cheer for the Korean national soccer team on the morning of June 18. (photo: Limb Jae-un)