The streets of Brazil are now covered in green and yellow as fans wearing the Brazilian national uniform have started crowding the streets.

The 20th FIFA World Cup kicked off in Brazil on June 13 with an opening game between the host Brazil and Croatia. Brazil defeated Croatia 3-1, a come-from-behind victory with the help of 22-year-old forward Neymar da Silva Santos Junior, who scored two goals. The World Cup games continue for 32 days until July 14 when the final is scheduled in Rio de Janeiro.

A total of 32 nations are competing in the competition, spread across 12 cities, including Brasilia, São Paulo and Rio de Janeiro. There are eight groups, with four nations per group. The top two teams of each group will enter the Round of 16. That is followed by the Quarter-finals, the Semi-finals and, finally, on Monday, July 14, at 4:00 a.m. in Korea, the Final. There will be a total of 64 games. The slogan of the 2014 FIFA World Cup Brazil is “All In One Rhythm.” 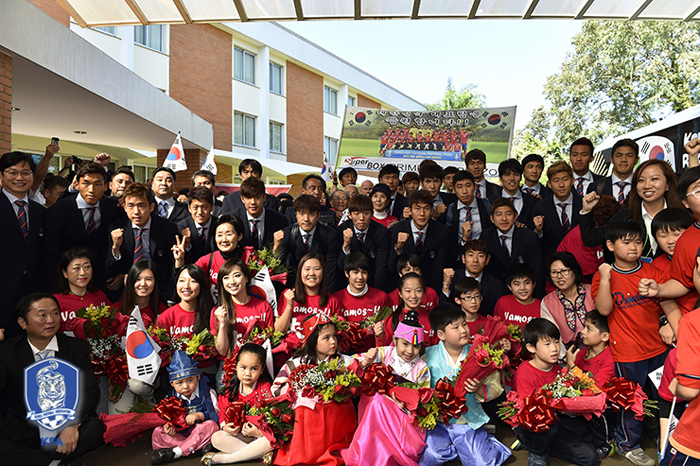 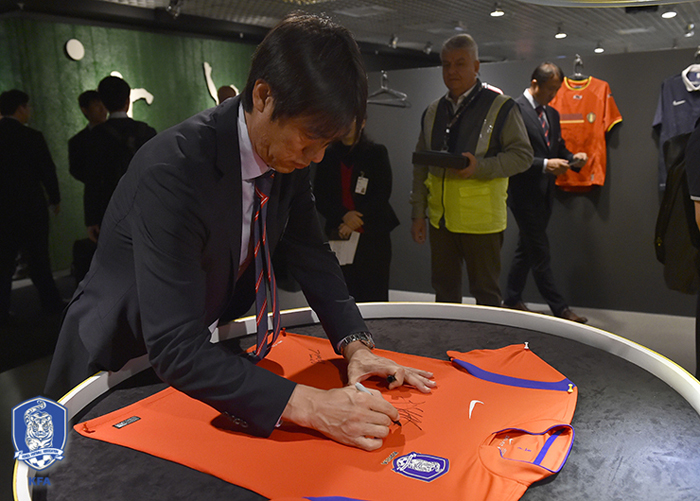 (Top) The Korean national soccer team receives a warm welcome as it arrives at its base camp in Foz do Iguaçu, southern Brazil.

The Korean national team, which qualified for the World Cup for the eighth straight time, arrived on June 12 at its base camp in Foz Do Iguaçu, a city tucked into the southern corner of Brazil, across the river from Argentina and Paraguay. The Korean team is in Group H with Algeria, Belgium and Russia. Under the direction of Head Coach Hong Myung-bo, the national team is aiming for the Quarter-finals. In the South Africa World Cup four years ago, the national team made it to the Round of 16.

Korea’s World Cup journey will begin with the first match of Group H against Russia at the Arena Pantanal in Cuiaba on June 18 at 7:00 a.m. in Korea, followed by matches against Algeria at the Estádio Beira-Rio in Porto Alegre on June 23 at 4:00 a.m. and against Belgium at the Arena Corinthians in Sao Paulo on June 27 at 5:00 a.m.

The current national team is Korea’s youngest team ever. Its average age is 26.1, compared to 27.4 during the South Africa World Cup four years ago. Of all the players, 22-year-old midfielder Son Heung-min, who plays professionally for Bayer Leverkusen, is the most notable. In the 2013-2014 season, Son scored 12 goals in the Bundesliga, Germany’s top soccer league. In the 2012-2013 season, Son also scored 12 goals as a member of Hamburg SV. ESPN, a U.S. sports channel, picked 22 players among those aged 22 or under who are going to shine in the Brazil World Cup. Son made onto that list, along with Neymar of Brazil and Mario Götze of Germany. 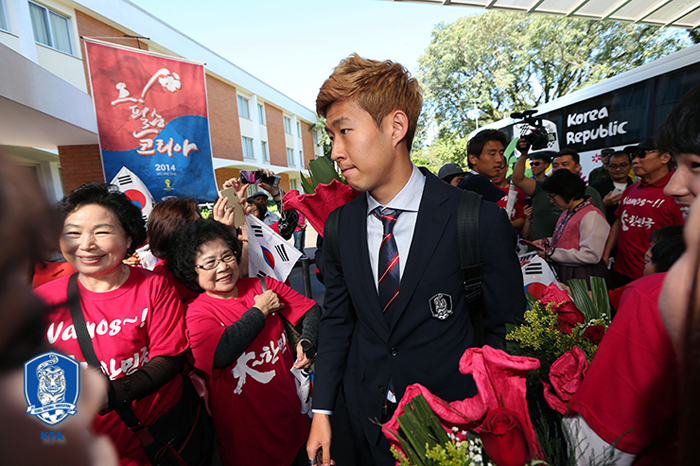 Son Heung-min is surrounded by fans as he arrives at the team’s base camp in Foz do Iguaçu, Brazil. (photo courtesy of the Korea Football Association)

Sub captain Lee Chung-yong, the 22-year-old mid-fielder from the Bolton Wanderers, is also worth mentioning. Lee has a knack for smart shooting, sending the ball into the unguarded space of the net. He scored with a ground ball against Argentina in the South Africa World Cup four years ago and with a header against Uruguay, also. Lee suffered a leg injury in July 2011, but he has slowly recovered and has played 47 games in the 2013-2014 season, the highest number of games since he entered the English Premier League. In November 2013, Lee, as captain of the national team, scored a header against Switzerland and contributed to a 2-1 victory.

“The condition of our players is almost 90 percent of their best,” said Head Coach Hong. “With a variety of complementary training exercises, they have improved a great deal.” 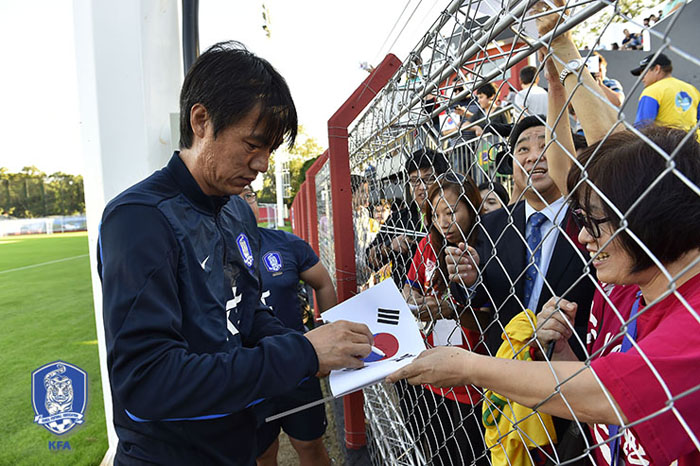 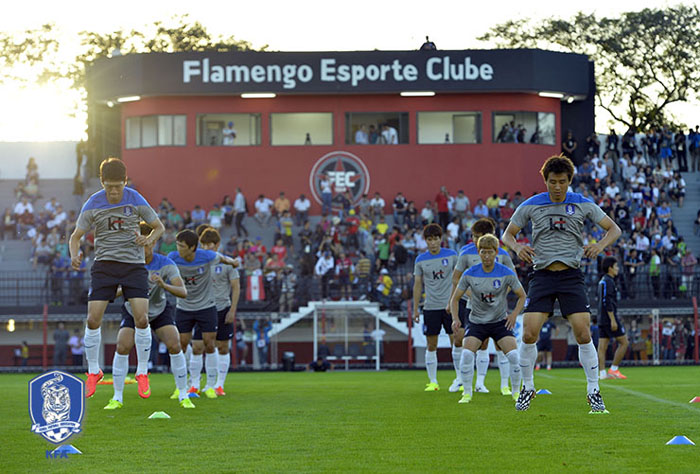 (Bottom) The national team runs through drills after arriving at its base camp in Foz do Iguaçu, southern Brazil. (photos courtesy of the Korea Football Association) 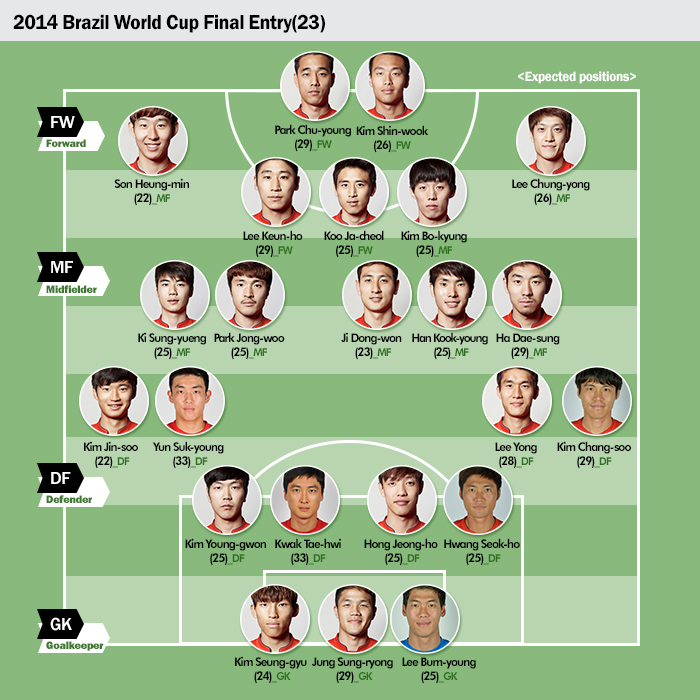 Final lineup for the Korean national soccer team for the World Cup in Brazil.