A shot reverberates across the Joint Security Area in Panmunjeom in the dark dawn of October 28. Swiss Lieutenant Sophie Jang, played by Lee Young-ae, is dispatched to Korea from the Neutral Nations Supervisory Commission (NNSC) to investigate what happened. The testimonies from both sides, North Korea and South Korea, do not square with each other. South Korean soldier Lee Su-hyuck, played by Lee Byung-hun, is reported to have killed two North Korean soldiers. North Korean sergeant Oh Gyeong-pil, played by Song Kang-ho, managed to survive the accident. Both of them avoid talking to Lieutenant Jang. During the investigation, however, she gets the idea that another soldier from the South, Nam Seong-sik, played by Kim Tae-woo, was engaged in the accident, too. Under too much pressure, Nam jumps off a building to his death.

All of these incidents date back to February of that year. Lee accidently fell behind during a military drill and ended up crossing the Military Demarcation Line (MDL), where he found himself stepping on a landmine. With the help of two North Korean soldiers, Sergeant Oh and Soldier Jeong Woo-jin, played by Shin Ha-kyun, Lee escapes death. After that, the three soldiers become friends. They often meet and spend time together during the night at a guard post on the North Korean side. Soldier Nam joins them later on.

On the day the accident took place, as they become aware that security is getting more and more intense and that other guards are on high alert, they decide to say goodbye to each other and exchange addresses and take a group photograph.

Lieutenant Jang, however, decides to keep it a secret. On the way to the hospital, Jang tells Lee that Jeong was killed by his gun. In shock, Lee finally kills himself, shooting himself in the mouth. 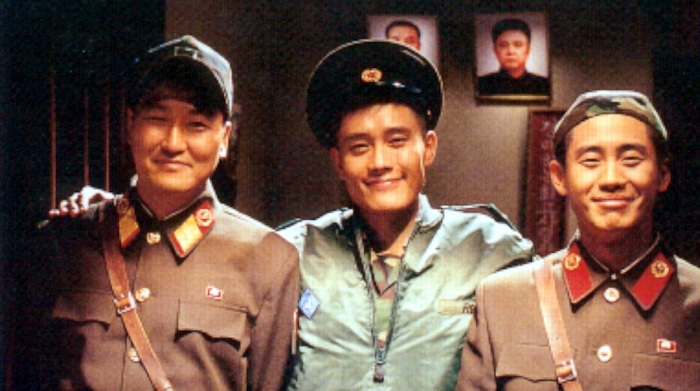 We had the first inter-Korean summit in Pyongyang. There was the reunion of separated families in Seoul and Pyongyang. The two Koreas marched as one into the Sydney Olympic stadium under the Unification Flag. These historic, meaningful moments all occurred in 2000 when the film “J.S.A.” was released. Today, looking back over the past decade, inter-Korean relations have gradually deteriorated. At this point in time, however, we are reminded that the movie broke all-time viewership records for the period.

The movie “J.S.A: Joint Security Area” depicts the secret friendship between soldiers of the two Koreas. Before the release of this movie, such a story and setting had been forbidden and unimaginable. During that period, pro-Communist people could not be portrayed as humanistic figures. If the military uniforms of the South didn’t look better than those of the North, the scene could not get passed the censors. Adapted from the full-length novel “DMZ” by Park Sang-yeon, the movie had to go through some hard times during the review process before it was finally given a 15-years-old-or-over rating. Without plot devices that were able to overcome that which is forbidden, and in a reality where the National Security Law is soundly established, the release of the movie would have been much harder.

The first such plot device is the scene where North Korean Sergeant Oh Gyeong-pil risks his life to remove the landmine on which South Korean soldier Lee Su-hyuck had stepped, in the middle of the Demilitarized Zone. With this, Oh becomes the lifesaver of Lee, becoming a “humane” North Korean, finally acceptable to South Korean viewers. Such a scene has been repeated again and again in more recent cinema, for example in “Secret Reunion” (2010).

Another plot device is how the story is told using flashbacks, a cinematic technique that tracks down the mystery of an accident, in this case one that took place at a guard post on the north side of Panmunjeom. This construction lets the viewer learn the ending first, that North Korean soldier Jeong Woo-jin is dead while Oh and Lee are wounded.

In the subsequent scene, during the investigation, North Korean soldier Nam Seong-sik attempts suicide, amplifying the curiosity of the viewer.

When Nam is at his deathbed, the movie flashes back again to reveal that two South Korean soldiers crossed the Bridge of No Return and often hang out with North Korean soldiers. However, perhaps since viewers already know that the characters paid the ultimate price for breaking the taboo, or that the truth is yet to be discovered, the psychological resistance of the viewer seems to not be very strong.

On top of that, the film applies elements of both fantasy and reality. It makes light of taboos, and at the same time makes appropriate use of thrills and suspense. The indication of the exact minute and second of the accident is the “reality” element, while exclusion of the year is the “fantasy” element.

Four of the characters, Lee, Nam, Oh and Jeong, are portrayed in the film as innocent and good-natured figures. They do enjoy cockfighting and playing a version of jacks with their bullets. Through these scenes, the movie emphasizes that Lee and Nam didn’t have any ideological motive at all for their behavior. The depiction of their friendship, coupled with the appropriate choice of background music, helps the film look like a fantasy fairy-tale, melting down the oppressive feeling possibly caused by breaking the taboos.

This fantasy, which is a bit regressive, makes a subtle comparison with the attempts of Swiss Lieutenant Jang, who approaches the incident with concrete evidence and logical deduction. However, this is reality, that the simple act of picking up a hat that blew across the demarcation line can be the subject of punishment, as it violates the National Security Law. The mise-en-scène that divides the screen into two once again brings awareness to the viewer about the ongoing confrontational situation between the two Koreas. A number of scenes bring attention to the situation and come across as threatening or frightening. For instance, when an unknown North Korean solider pops up out of nowhere at the North Korean guard post, or when Oh becomes suddenly serious upon Lee’s jokes about him defecting. Such obsessive fear plays a part to amplify our suspense, leading up to the final scene, which is already known.

With such a “Red Complex” in the audience, brought about by the nation’s separation, and building up with a series of accidents and incidents, the plot finally lets the four soldiers plunge into tragedy. When they reach the moment of crisis, when the unknown soldier appears at the post, their friendship is gone like a mirage. Instantly, they point a gun and return to being the “enemy” of each other. Sergeant Oh, featured as a clear-headed figure, tries to hush up what’s happened, but can never break the wall of fear and distrust that is deeply and unconsciously rooted in his own psyche, and also in all of us. 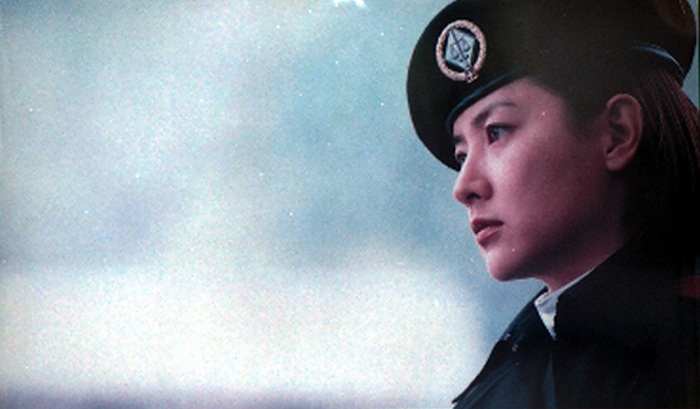 What’s behind the mysterious shooting is all revealed as Lee gives testimony to the Swiss lieutenant. Then, there is another anti-climax that pops up. It turns out that Lee killed Jeong, instead of Nam. Entrapped in guilt, Lee finally decides to kill himself.

According to director Park Chan-wook, the original ending he prepared had Lee and Oh meeting in a third country. At this point, when we look back on the death of Jeong and the suicide attempt by Nam, Lee’s suicide is more likely to be related to the reality of Korean society, where violations loom larger than feelings of guilt.

Instead of an encounter between the soldiers, the final scene of the film goes back to a point when Sergeant Oh picks up a hat that a tourist dropped at Panmunjeom. With the sound of camera shutters, moving images stop and the color turns black. In the freeze frame, images of the four — Oh Gyeong-pil, Jeong Woo-jin, Nam Seong-sik and Lee Su-hyuck — appear on screen one by one. Inside the frame, Oh and Jeong show a smile. Strangely enough, they look calm and peaceful. The screen captures close ups of each figure, one by one, reminding the viewer of their friendship.

However, in the final scene, where all four are featured in one frame, Lee Su-hyuck uses hand gestures to tell the tourists not to take any pictures. This sign of “prohibition” disturbs the peace and is the “stain of reality.”

It’s been more than 60 years since the Korean War, but we have yet to find a way to remove the stain. Simply put, the tragic fate of the soldiers of the two Koreas in the film, as well as that of Sophie Jang’s father, who was a former North Korean soldier and captive during the war and who had to choose a third country, Switzerland, rather than either of the two Koreas, is unfortunate, but it is still existing today.

*This series of article has been made possible through the cooperation of the Korean Film Archive.

*Click here to see previous parts in our series of Korea.net’s must-see films.