The vast plains of Dangjin in Chungcheongnam-do (South Chungcheong Province) have no mountains, but there is a small hill on the plain over which strong winds blow all the time. On the top of the hill stands the Hapdeok Catholic Church, a landmark of the area, which looks over the small town of Hapdeok-ri, in which 95 percent of the 85 households are Catholic. Almost every household in Hapdeok-myeon, the surrounding administrative county, has Catholic martyrs among its ancestors.

Catholics nearly disappeared from the area due to a century-long persecution throughout the 19th century. However, the Korea-French Treaty of 1886 granted religious freedom across Joseon and Catholics returned to the area, which was then called Naepo. Afterward, Catholicism started to revive. As the congregations expanded rapidly, Eugéne Jean George Coste, a temporary bishop of Joseon, sent Father Jean Curlier to a Catholic church in Yangchon in 1890 to oversee 12 regions, including Seosan, Yesan, Dangjin and Buyeo, all in Chungcheongnam-do. 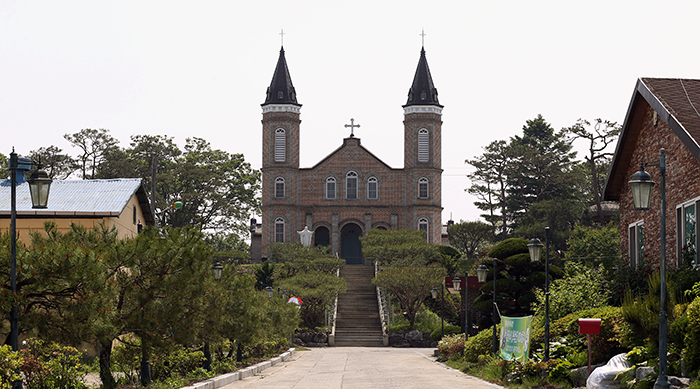 Built in 1929, the Hapdeok Catholic Church is the first catholic church around Naepo. The Gothic church was built with bricks and wood and has two bell towers. (photos: Jeon Han)

The Catholic church in Yangchon was designed in a hanok style, emulating traditional Korean houses. The origins of the Hapdeok Catholic Church lie in Yangchon. The Catholic church in Yangchon moved to Hapdeok in 1899. In 1929, French Father Philippe Perrin built the current Hapdeok church by bringing in Chinese technicians. The Gothic church with two bell towers was built with bricks and wood. The Hapdeok church was considered a huge cathedral at the time. Standing high on a hill, overlooking a vast plain, the church has spectacular surrounding views in all directions.

The church has a large painting of the Holy Family, donated by a cousin of Perrin. Perrin himself was killed by North Korean soldiers during the Korean War (1950-1953), as instead of fleeing he stayed behind to guard the church. Perrin put into action the words from the Gospel of St. John 10:11, “I am the good shepherd. The good shepherd lays down his life for the sheep.” There is a sculpture of Perrin in a corner of the church.

Most of the priests sent to Naepo at that time belonged to the Paris Foreign Missions Society (Missions étrangères de Paris). The Vatican ordered the Paris Foreign Missions Society to propagate Catholicism in Joseon-era Korea and the society sent out priests to do the missionary work. Their most important duty was to select and educate indigenous priests from the region to which they were sent, in this case Joseon. The French priests sent the future St. Andrew Kim Dae-geon, Korea’s first priest, as well as Thomas Choi Yang-eop and Francis Choi Bang-je to Macao to study Catholicism.

“For a while, young students of theology longed to do missionary work in Joseon. It was because they wanted to die as martyrs,” said Father Gilbert Ponce, a professor at Daejeon Catholic University. “But not everyone could die as a martyr. Martyrdom is God’s blessing.” 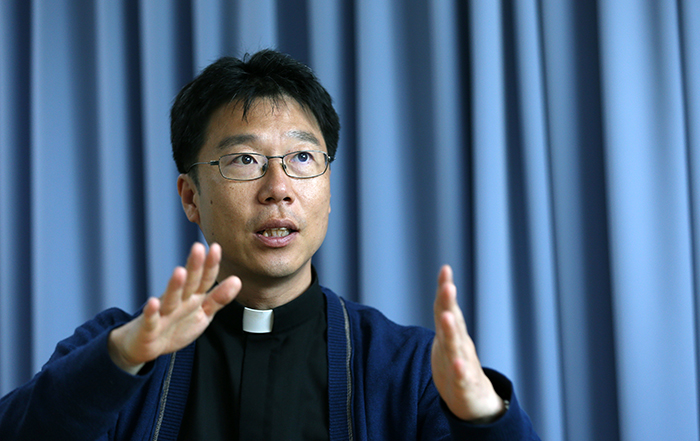 Father Kim Sung-tae Joseph of the Hapdeok Catholic Church says that the priests in Hapdeok-ri and Gongse-ri made ointments and distributed them to local residents. (photo: Jeon Han)

There are many interesting tales surrounding the Hapdeok Catholic Church. According to the church’s Father Kim Sung-tae Joseph, a long time ago, the faithful would dress all in white and walk for many kilometers up to the church to celebrate Mass, creating a spectacular scene. Also, when the Angelus Bell in the church rang at 6 a.m., 12 p.m. and 6 p.m., farmers stopped working and prayed in the field.

“The sound of the bell reached very far. The spectacular scene of farmers praying in the field was similar to those in the painting ‘The Angelus,’ by Jean-François Millet,” said Kim.

Priests in Naepo also served as doctors, as medical technology in Joseon times was not well developed. Priests at the Hapdeok Church, and at the Gonse-ri church in Asan, produced ointments and distributed them to residents, helping them a great deal. People used so-called goyak, an ointment, to treat festers until the 1980s in Korea, and the ointment was originally produced by the priests.

“People went to see priests whenever they were sick, no matter whether they had a stomach ache or an eye infection,” Kim said. “Lee Myong-rae later learned how to make the ointment and started making goyak, naming it after himself.” 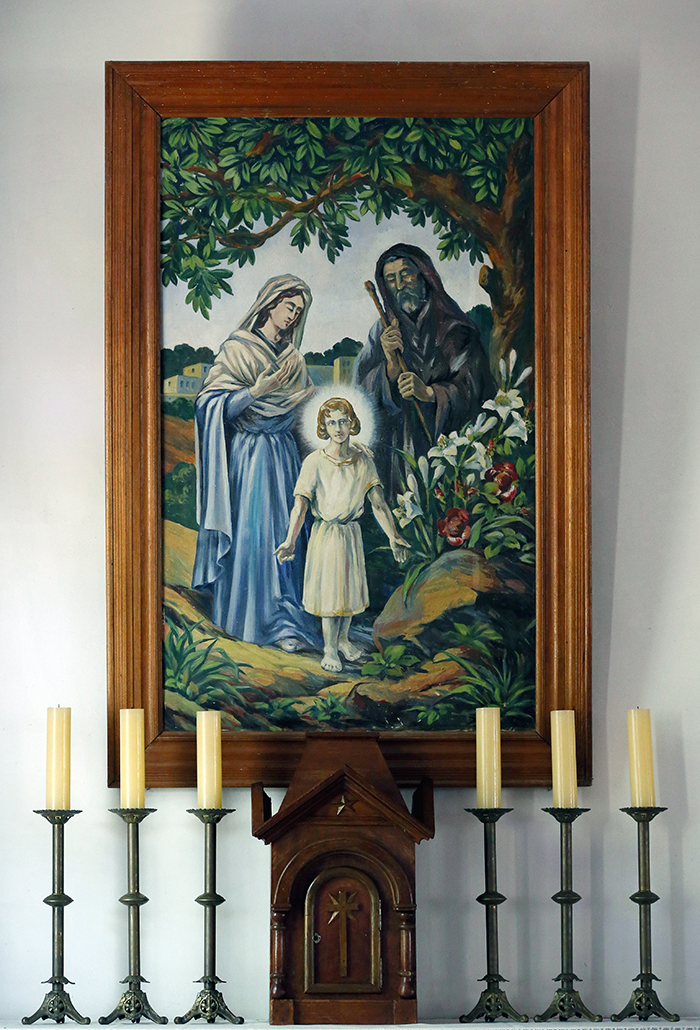 (Top) A painting of the Holy Family donated by a cousin of Father Philippe Perrin. (Bottom) A statue of St. Andrew Kim Dae-geon near the Hapdeok Catholic Church. (photos: Jeon Han)