And drama in the kitchen! Audiences of all ages and nationalities can enjoy! Everyone is welcome!

Since our first performance in 1997 at the Edinburg Fringe Festival NANTA received its first award for best performance. This now world famous nonverbal performance brought 8,100,000 people the largest audiences in Korean history. Since its first debut NANTA performance has been on the road of success around the world. In 2004 NANTA finally made an appearance on New York’s Broadway. This opportunity opened up new doors for Korean culture and performances.

Now about 7,000,000 people around the world are enjoying NANTA’s spectacular performances. NANTA also received an award for Best Urban program in 2009 and is also being highly recommended by tourist and locals alike. “This is a must see performance” as 750,000 foreign visitors per year come to Korea to enjoy NANTA and Korean culture. 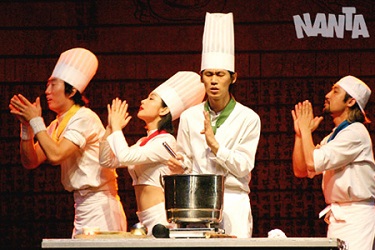 NANTA is a completely nonverbal and universal performance. Since it is purely presented through music and motions, there is no language barrier. Therefore, NANTA can be enjoyed by people from all around the world! 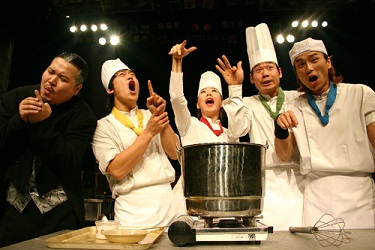 Many nonverbal performances are dull due to the repeat of only rhythms and beats and lack of excitement in suspension. NANTA overcomes this drawback by combining a storyline with various comic scenes set in a kitchen. By adhering to its storyline, NANTA manages to be well organized without using any verbal scripts.

NANTA combines rhythms from Korean folk music with modern music to create an experience very unique but also familiar to the international audience. As an ameliorated mixture between Korean traditional rhythm and modern audio system, NANTA became a super-rookie in the world culture market.

To double the fun, all of the audience can participate in the show. Spectators can be the bride and groom in a traditional Korean Wedding ceremony, compete in piling up dumplings, and interact with the performers. You can play the rhythm on the stage and make the other audience more excited. You become a part of the show! This is a unique but charming point, which only belongs to NANTA.

While they are busy preparing the vegetables and organizing the kitchen, a bad tempered manager appears. He orders them to prepare food for a wedding by 6 o’clock in the afternoon. The cooks, who had not been told about this event, are caught completely off-guard. Not only that, the manager also brings his young nephew with him and demands that the cooks teach him how to cook and prepare food. The manager exits after barking out these seemingly impossible orders.

Although the cooks don’t like this clueless boy, they begin their works. Peeling this here, chopping that there, and frying it over there, the whole kitchen rocks and rushes. While preparing for the reception, the boy and the cooks get closer, and the audience joins the show.

With their excellent cooperation, brilliant ideas and full performance, they finally have all the jobs done! The wedding banquet draws to a successful conclusion.

A splendid party with ‘now four’ cooks and the manager! Their vigorous energy, overwhelming power and thrilling sound are all exploded at the finale. You can hardly resist rocking your body, and the finale will long remain in your memory.