First, though many of the Royal Tombs of the Joseon Dynasty are scattered across the whole nation, one of the most beautiful is the Jangneung tomb for King Danjong (r. 1452-1455) in Yeongwol County. Second, the Gangneung Danoje Festival is part of Korea’s contribution to the Masterpieces of the Oral and Intangible Heritage of Humanity, a list of so-called “intangible cultural items” maintained by UNESCO.

How did the two items find a spot on the UNESCO list? What is the history behind their inscription? Those are possible questions that, especially, tourists to Korea might want to ask.

On May 31, there was the chance for people to explore the two sites and to delve into the cultural value and historical stories behind them. 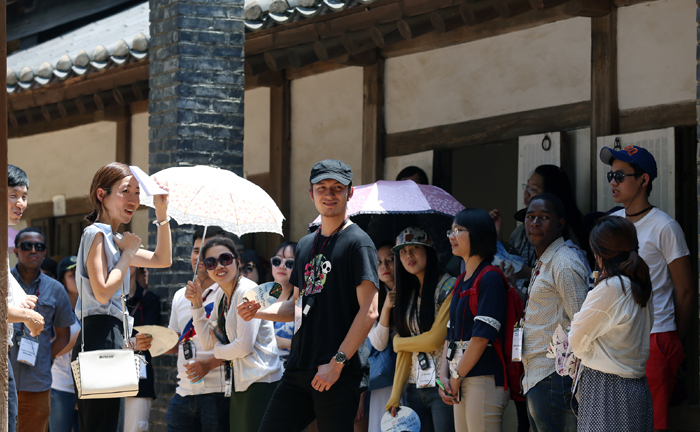 Participants in the “Exploring UNESCO World Heritage in Korea” program listen as tour guide Lee Byeong-yoo explains about the royal tomb and its resident,

the “Boy King” Danjong, the sixth monarch of the Joseon Dynasty, on May 31. (photo: Jeon Han)

The two-day program, “Exploring UNESCO World Heritage in Korea,” was hosted by the Korean Culture and Information Service (KOCIS), part of the Ministry of Culture, Sports and Tourism and publisher of Korea.net. KOCIS invited a total of 48 non-Koreans on the trip, covering both students and non-students alike and reaching out to Korean residents from a variety of nations, including Vietnam, the Philippines, Brazil, China, Ethiopia, Russia, Indonesia, Canada, the U.S. and Uzbekistan.

Departing Gwanghwamun Square in central Seoul, the group hit the road early in the morning on May 31. After a three-and-a-half hour bus ride, they arrived in Yeongwol, a county in Gangwon-do.

They soon found that the county is home to something of historical value. It is the Jangneung royal tomb from the early Joseon Dynasty (1392-1910), enlisted as a UNESCO World Heritage Site in 2009.

The participants were accompanied by a tour guide and an English interpreter as they browsed through the grounds, getting to know who was buried in the tomb and the historical accounts behind it. A group of participants listen to the story behind the royal Jangneung tomb in Yeongwol County, Gangwon-do, on May 31. (photo: Jeon Han)

The dethroned 15-year-old former king was exiled to the Cheongnyeongpo, a small complex near a bend in the river, in Yeongwol for about two months. The Cheongnyeongpo has some remains where visitors can see traces of Danjong’s stay, including the Danmyoyujibi, a monument to indicate the location and existence of the king’s residence, the Nosandae, a peak where the king often fell into deep sorrow and agony as he longed the capital Hanyang, now Seoul, and a stone tower erected by the former monarch in honor of his queen, Queen Jeongsunwanghu, who remained in Hanyang.

Visitors listen as the tour guide tells the life story of Joseon’s sixth monarch, King Danjong, in the Cheongnyeongpo complex in Yeongwol Country, Gangwon-do, on May 31. (photo: Jeon Han)

At the age of 17, he died a tragic death, put to death by poison after his loyal retainers, who were also then murdered, made an attempt to have him restored to the throne.

His body was at first thrown into the Donggang River, but then the governor of Yeongwol, Eom Heung-do, had the body secretly buried elsewhere along a nearby hillside, despite fears of reprisal.

No trace of the burial location was found until Park Chung-won, a magistrate of the county, located the site in 1541 and directed the tomb to be rebuilt and to be properly maintained.

Down the hill from the tomb lies the Baesikdansa, a wooden plate on which the names of 268 faithful retainers are listed. They all sacrificed themselves for the former king. There are also stone monuments in honor of Eom Heung-do and Park Chung-won, the governor and the magistrate. “It’s surprising to know that there are some similarities between the history of Ethiopia and Korea,” said Kuastros Mekonnen Belaynehe, a participating Ethiopian student who came to Korea as part of the Korean Government Scholarship Program for International Students (KGSP), sponsored by the National Institute for International Education (NIIED).

“Ethiopian history, too, has similar stories, where kids as young as Danjong were dethroned and assassinated. It’s interesting that this tomb has a similar story to tell,” he added.

The group was then bussed for about two hours to the site of the Gangneung Danoje Festival in Gangneung, a site designated in 2005 by UNESCO as part of Korea’s contribution to the Masterpieces of the Oral and Intangible Heritage of Humanity, a list of “intangible cultural items.”

Upon arriving, the visitors found themselves in the middle of the Yeongsin Haengcha, a deity welcoming parade, and the Sintongdaegil parade, a procession aimed at wishing for unity and healing across the community, marking the beginning of the festival.

There were many tourists, too, dancing and cheering to the sounds of traditional instruments that were ringing throughout the parade.

The word dano in the Gangneung Danoje Festival represents a national holiday that has been around for more than a millennium. It dates back to Korea’s Three Kingdoms period (57 B.C.-A.D. 668) and it became one of the biggest holidays during Joseon times (1392-1910).

The Gangneung Danoje Festival is aimed at preserving folk culture of the ancient kingdoms. The festive comes on the fifth day of the fifth lunar month with the sinjubitgi, the distilling of the sacred liquor that is to be served at memorial services.

The festival also involves a ritual, the Daegwallyeong Guksa Seonghwangje, which pays tribute to Monk Beomil (810-889), and a plethora of other events, such as the Dano Gut, a shamanic ritual, and the Gwanno Gamyeongeuk, a traditional mask drama performed by traditional dancers. These all start on the third day of the fifth lunar month and last until the eighth day. 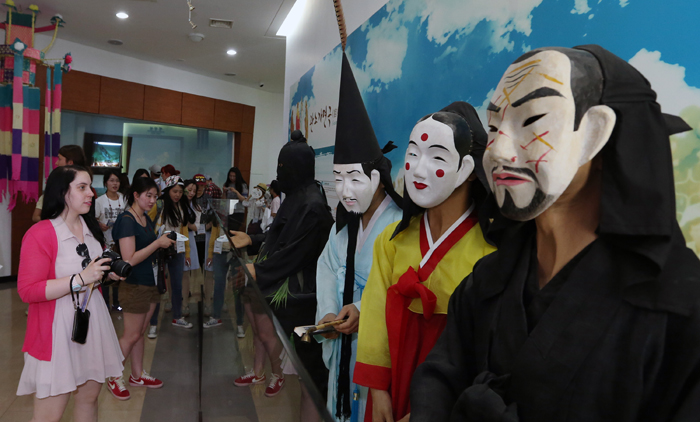 Visitors got a glimpse of the Jojeonje, a Confucian ritual, and the Dano Gut, a shamanic ritual, performed every morning throughout the festival to pray for peace and security across the region.

“I’ve never even heard of this festival and didn’t expect how big it would be,” said Sarah Stricker, a teacher from the U.S. “I’ve never experienced this kind of festival back in the United States. It’s awesome. Now that I’ve got a better understanding of the festival itself thanks to the tour guide, I want to enjoy everything offered here.” 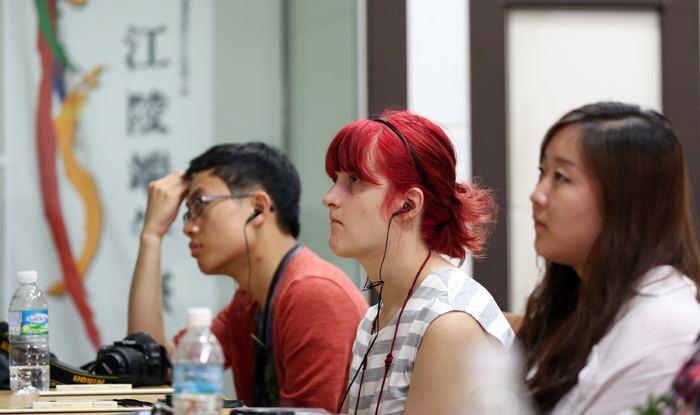 “As you can see, even international tourists can enjoy to the fullest the diverse events offered throughout the festival, especially if they know its background and history,” Sim added. Participants in the KOCIS tour pose with traditional performers after the Confucian ritual on June 1. (photo: Jeon Han)

The host of the program, KOCIS, runs a series of programs aimed at offering non-Korean residents of Korea the chance to explore Korea’s UNESCO World Heritage sites and traditions.

Starting with this visit to the Jangneung royal tomb and to the Gangneung Danoje Festival, the year-round program will bring a selected group of foreigners to other heritage sites across the country, including the Hwaseong Fortress, the Andong Hahoe folk village and to the Buddhist temple at Bulguksa and the Seokguram Grotto, both in Gyeongju.

More information about the programs can be found at the website below.
https://www.heritageinkorea.kr/main.do

UNESCO Heritage Tours
About the author