Korea aims for quarter-finals in Brazil

The Korean national soccer team has set itself the goal of making it to the quarter-finals in the upcoming FIFA World Cup 2014 in Brazil.

The team had a friendly with Tunisia on May 29 at the Seoul World Cup Stadium in Sangam-dong. After the match, a special ceremony was held to mark the launch of the national soccer team. Tunisia won the game by a score of 1-0, despite the strong cheering from the Red Devils, the official Korean national soccer team fan club. The team said it will use the match as an opportunity to look back and to improve, so that they can come up with better strategies and tactics before the actual World Cup begins. 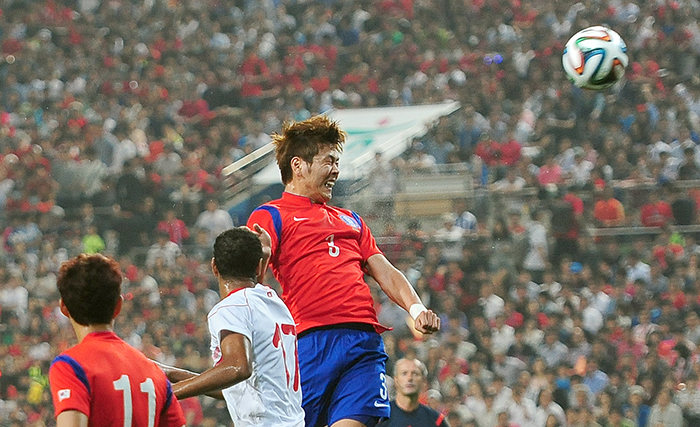 Kim Young-gwon (center) tries to cut off Tunisia’s attack by heading away the ball during a friendly between Korea and Tunisia. (photo: Jeon So-hyang, Ministry of Culture, Sports and Tourism)

The crowd had filled the entire stadium and greeted each Korean player with acclamation. Though the team did not win the game, it vowed to come back with a better performance at this year’s World Cup.

“It was generally unsatisfactory play. We will not forget this match and will get a fresh start during our upcoming training sessions in Miami,” said team captain Koo Ja-Cheol, showing a firm will to achieve their goal of the quarter-finals. 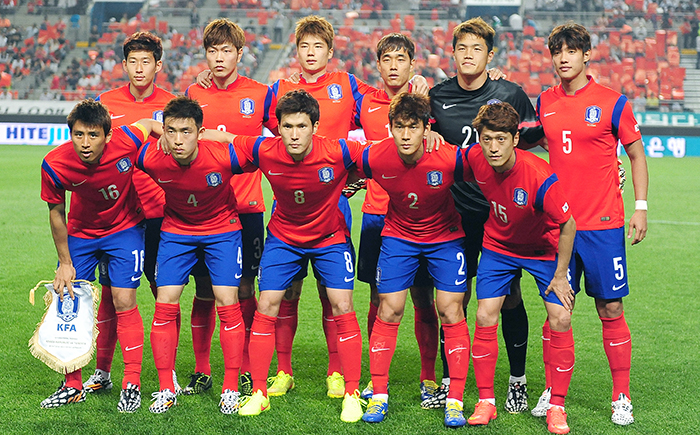 Korean national soccer players pose for a photo prior to the friendly with Tunisia on May 29. (photo: Jeon So-hyang, Ministry of Culture, Sports and Tourism)

“I have been preparing for this moment ever since I was promoted to national team coach. We will review what we lack and do our best to revive the signs of hope for Korea,” said coach Hong Myung-bo, referring to the recent tragic Sewol ferry sinking. Hong added that his players are at about 80 percent of their physical peak right now and that he will focus on point-based training in Miami.

The Korean national soccer team fan club wears red shirts to cheer on its heroes while displaying a large yellow banner in mourning of the people who lost their lives in the tragic Sewol ferry sinking, at the Korea-Tunisia friendly on May 29. Prior to the match, there were 16 minutes of silence in honor of the 16 people still missing from the ferry disaster. (photo: Jeon So-hyang, Ministry of Culture, Sports and Tourism)

The national team will head to Miami to get adapted with the time zone and temperature, which is similar to those in Brazil, and to fine-tune their training and tactics. They will have one more practice match against Ghana on June 10. The team will arrive at its training camp in Foz do Iguaçu, Brazil, on June 12.