Gyeongsangnam-do (South Gyeongsang Province) is located in the southeast corner of the peninsula, surrounding Busan and Ulsan. The region is very warm, as cold air from the east is blocked by the Taebaeksan Mountains running along the East Sea and cold air from the north and west is blocked by the Sobaeksan Mountains. The Nakdonggang River that flows through the middle of the area is the main source of drinking water for the local populace. The fertile soil in the surrounding area offers people plenty of food to eat, too. 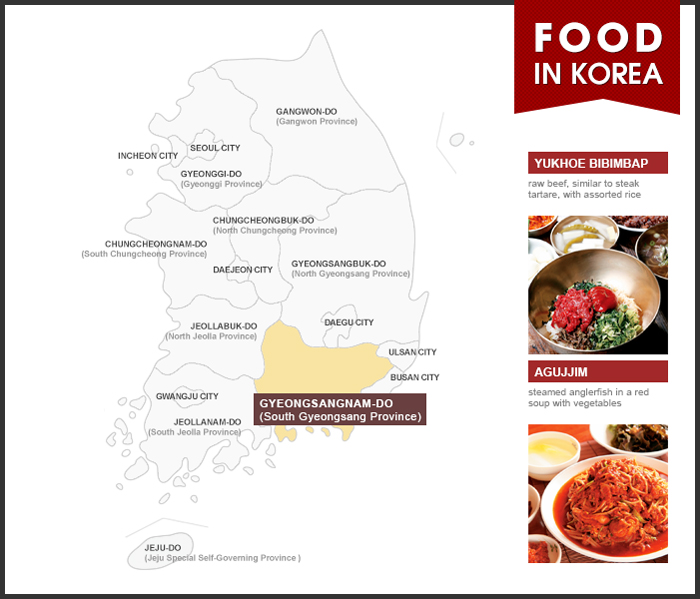 The coastline along the south forms a ria, a long, narrow inlet of a river that gradually decreases in depth. It was formed by the submergence of the edges of the two mountain ranges, the Taebaeksan and the Sobaeksan. The coast is home to around 400 islands, including Geojedo Island, the nation’s second largest, and Namhaedo Island, the fourth largest. The Hallyeosudo waterway in Tongyeong, combined with the adjacent Dadohaesang National Park, makes the region one of the most popular travel destinations in the country. 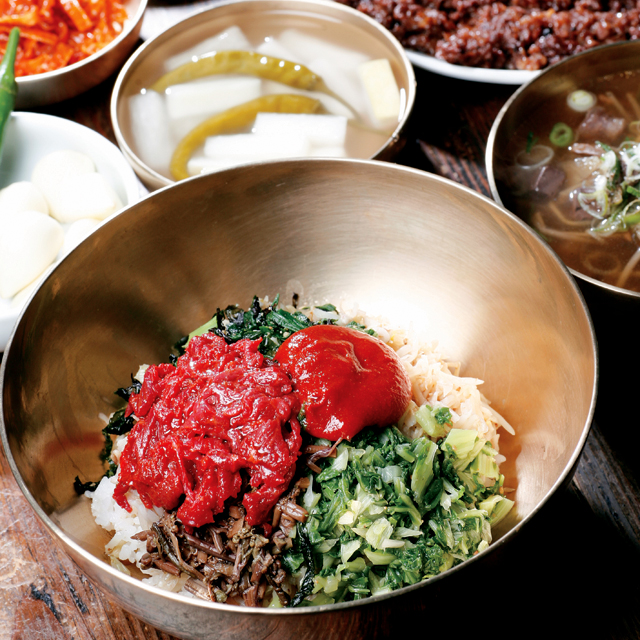 Yukhoe bibimbap was created in Jinju, Gyeongsangnam-do, during the Japanese invasion of 1592. Local people, both male and female, took part in the fierce Siege of Jinju. The male warriors fought the enemy on the front lines and the women supported them from the back. The day-to-day battle seemed to go on forever. The men were unable to break the siege, but had to stay in position to protect and save the castle. As they had no time to eat, their families had to carry meals to them. Due to the urgencies of war, setting a table with rice and side dishes in the traditional manner was impossible. This was the birth of bibimbap, made with rice, vegetables and other ingredients all mixed together. Thinking that their defenders needed more nutrients, some of the families came up with the idea of adding some beef to the mixed rice. Fortunately, Jinju is a region known for its abundant cattle. That’s how fresh raw beef came to be put on the rice, in an effort to encourage the exhausted soldiers.

Yukhoe bibimbap is a steamed bowl of rice generally served in a yellow brassware bowl with botangguk, minced beef, dried octopus and dried mussels, an assortment of vegetables, herbs and mung bean jelly, along with seasoned dried seaweed, with red chili paste and slices of raw beef on top. 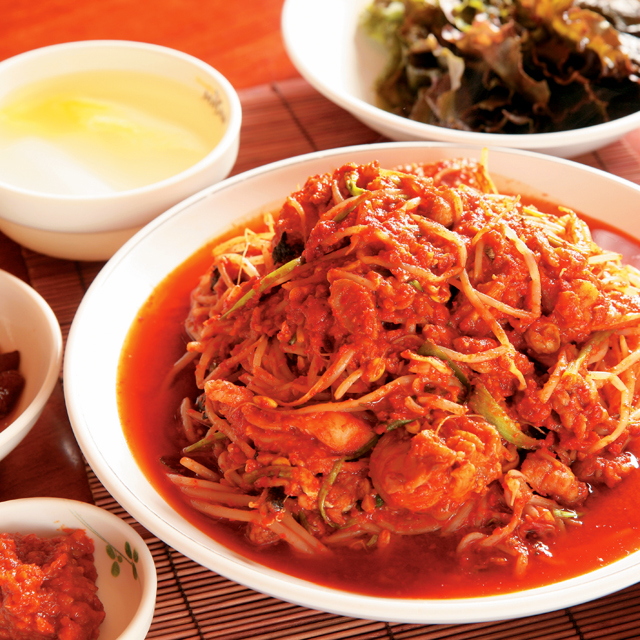 Another famous dish from South Gyeongsang Province is agujjim. Long ago, fisherman avoided catching anglerfish because they were thought to be ugly and grotesque. If they were caught, they were released back into the water or used as fertilizer for the soil. This ugly fish, however, became a delicacy in Masan some 40 years ago.

One day, a starving fisherman visited a pub with an agwi or anglerfish that he had caught. He gave it to the proprietor and asked her to cook it for him, but she threw it away. A month later, a different customer visited late in the night. There was nothing to serve. In search of something to serve the nocturnal traveler, the woman found the fish somewhere in the back of the kitchen. In a hurry, she decided to cook it by steaming it together with bean sprouts, water parsley, mideodeok, the warty sea squirt, and any vegetables that remained in the fridge, seasoning it with chili, bean paste, green onions and garlic. It was delicious. What was created in a hurry became Masan’s local delicacy, beloved by people nationwide.

Anglerfish, agwi in Korean, and steamed agwijjim are now standard elements of the Korean table. People from South Gyeongsang Province, however, pronounce agujjim without the “I.” As the dish is now famous all over the country, visitors can flock to the Odong-dong neighborhood in Masan to enjoy the numerous fish restaurants in the area.