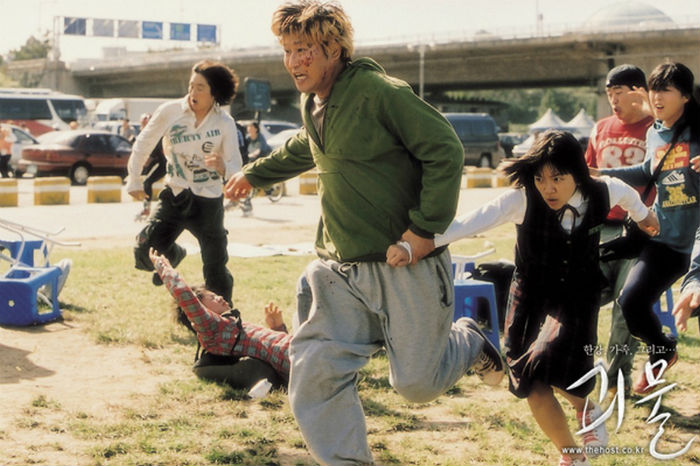 Gang-du, played by Song Gang-ho, works in a kiosk alongside his dad in the Hangang riverside park. One day, he discovers something large and animal-like dangling from the underside of a bridge, with people crowded about, staring at it. Suddenly, the unidentified monster jumps down onto the park pathway and starts crushing, trampling and eating people. In an instant, it’s running around in a frenzy.

Gang-du begins to run away with his daughter, Hyun-seo, played by Go Ah-sung. Along the way, however, he accidently loses hold of her hand. The monster seizes the moment and snatches up Hyun-seo into its maw, taking her away as it dives back into the river. Police, the army, relevant authorities and even the U.S. Army decide to close the river, wary of a certain virus. The whole city becomes paralyzed. Gang-du receives a phone call from Hyun-seo while at the hospital being tested for any possible virus, and learns that she is still alive. Government authorities, however, do not trust him and discount his words. They think he suffers from a certain type of delusion, a possible symptom of the suspected virus. The family has no choice but to rely on each other. His sister Nam-ju, an archer, played by Bae Doona, and his younger brother and a former student activist, played by Park Hae-il, decide to escape from the containment zone, filled with infected people, and leave to seek out and save Hyun-seo.

Released in 2006, “The Host” was viewed by more than 13 million moviegoers, becoming the most-watched movie of all time in the history of Korean film. It maintained the top spot until 2009, when “Avatar” by James Cameron broke the record. Still, “The Host” is the most watched domestic film in Korea.

The monster, which looks like a deformed amphibian, was shaped and designed using New Zealand’s outstanding computer-generated technology, well-known worldwide through the “Lord of the Ring” series produced between 2001 and 2003 by Peter Jackson. Upon its birth, the waterborne monster drew the highest viewership in Korean film history. “The Host” was hugely popular because it was a monster movie, a very rare genre in Korea, and was shot alongside the Hangang River. Nearly seven years have passed since the movie was released, but on a rainy day, looking at the river, people are still reminded of this movie’s gigantic monster. This means that “The Host” made a great contribution to the fabric of Seoul, becoming one of the river’s emblems. The beast might even be added to the list of Seoul’s cultural heritage items.

As the movie opens, it’s a peaceful afternoon along the riverside. A monster all of a sudden pops out of the water and starts attacking citizens, who were enjoying the peace, jogging along the path, riding bikes and listening to music, sitting on the grass. The riverside park, frequented by “innocent people” as they enjoy their leisure life, is suddenly occupied by a huge monster. The sense of shock might not win sympathy from people living outside of Seoul. Just 20 minutes into the movie, a monster appears alongside the river, in broad daylight, and destroys everything around it. What a great scene! 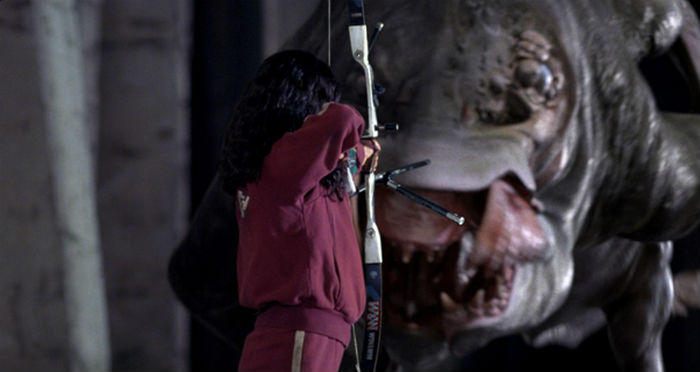 For those who would expected a monster movie like “Godzilla” (1954), this one might disappoint you, in terms of its size and power. The monster is only the size of a bus. One of the characters in the movie exclaims, “There’s a dolphin,” pointing at the monster in the river. This beast never spits fire nor shoots rays of light from its mouth. It only leaps around the city, eating people and destroying things. The monster is just too weak, when we take into account the size of the Hangang River. The Han is one of the largest urban rivers in the world, and its name value is used in its first monster movie.

The monster destroys neither a single bridge, out of the 30 bridges crossing the Han, nor a single one of the innumerable buildings around the metropolis, home to more than 10 million people. The monster only tears down a small street stall and several vehicles. Instead, it reminds people of the fear and horror that they’ve had in the past, as far back as the Korean War (1950-1953) and as recently as the Yangju highway incident in 2002.

In other words, the monster appears out of modern history, rather than from ancient mythology, from a legend, or from some time in the 600-year history of the country’s capital. Koreans experienced bridges over the Hangang River collapsing on their way to work. They learned that the slogan, “the miracle on the Han,” was such an empty motto. For them, perhaps, the concept of a movie monster appearing in the river reminded them of the many “miraculous disasters” that have occurred in the not-too-distant past.

How about this scene? When the monster first makes its appearance on the banks of the Han and people run away, screaming, Gang-du runs away, too, holding the hand of his daughter, Hyun-seo. Gang-du suddenly trips and falls, losing his grip. He gets up and keeps running, again holding a hand, but it turns out to not be Hyun-seo’s, but to be someone else’s. Hyun-seo was left behind and was taken away by the monster. Later, Gang-du’s younger brother criticizes him, saying that, “You were running with a random girl? Are you really the father?” 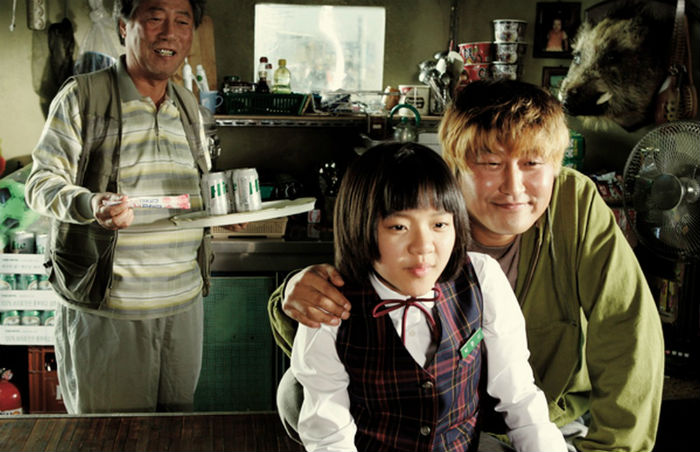 We have heard countless such stories about accidents happening after a brief error, especially stories from the Korean War. Someone was said to have carried on their back a pillow, rather than the child. Another was said to have run away from the enemy with a child, who turned out to be the child of a neighbor. As family members separated by war can hardly be reunited, a brief mistake can turn into something that changes all the lives in the family.

Also, the concept of letting go also reminds us of another girl featured in another film, “A Petal” released in 1996 by director Jang Sun-woo. The girl suffers from a sense of guilt as she ran away from her mother, who collapsed in the street after being shot by the army during the 1980 democracy uprising in Gwangju. Letting go of the hand at a critical moment, whether it is on purpose or not, results in a burden that they carry for the rest of their lives. As the true causes of war and political uprising have not yet been questioned, the individual who loses a family member embraces guilt and agony throughout their lives. No matter if it is the whole world, a nation, or an ideology, they take no responsibility at all for the individual losses caused by an abstract system or structure. The person who is close to the risk, or who happens to let go of a loved one’s hand, has to carry all the responsibilities and the sense of guilt.

Guilt has built the modern history of Korea. In “The Host,” Gang-du and his family have to go in search of Hyun-seo, to pay the price of Gang-du’s letting go of her hand. It calls attention to the system, a system that transfers all the burdens onto the family. This has been true throughout the nation’s modern history.

On the other hand, I have come up with a surreptitious idea. If the movie had set a mother figure, rather than father figure, losing the child, how would this movie have changed? I don’t mean to say that Gang-du’s actions were inadequate. However, Gang-du falls asleep, lying spread eagled while crying at the joint funeral. In that scene, he is out like a light, with his hands tucked between his legs. If it were a mother, would that have been possible? Apart from the serious situation, Gang-du’s behavior is food for laughter that shapes the style of the film. If a mother had been cast in that role, this would never have been possible. If it were a mother, the movie would have had no comic elements, like Bong Joon-ho’s “Mother” (2009). Presumably, not having a mother figure in the film is a very intentional and unavoidable decision. That decision itself perhaps tells something more about our society and culture.
-Viewed by professor Baek Moon-im of Yonsei University

*This series of article has been made possible through the cooperation of the Korean Film Archive.

* Click here to see previous parts in our series of Korea.net’s must-see films.