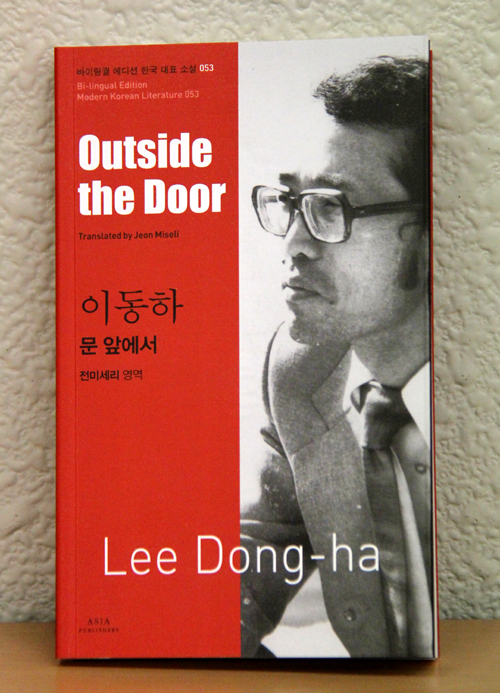 Lee Dong-ha’s “Outside the Door,” one of the fifteen volumes in the Bilingual Edition of Modern Korean Literature collection published on March 14 this year, revolves around a father and a son who are caught in an odd situation and have to spend an evening together outside the house.

The story of the 1992 novella is set in the early 1990s, when cellular phones were not that common. It begins with a man in his late 40s, Jong-nam, standing outside the locked door to his apartment in Seoul.

The man’s job is far away, in a remote area, and it only allows him to head back to Seoul once a month, on the last Friday, to spend one weekend with his family.

One day, he gets home, this time without reminding his family of his homecoming. The man knocks on the door numerous times, but finds himself not being able to get in because no one is home.

He hangs around the stairwell, waiting for his wife to show up. All of a sudden, the man hears something completely unexpected from the stairs above.

Then, a very familiar face shows itself. The man recognizes the familiar voice right away. It’s his own father, who always calls him by the second syllable of his name and mispronounces it as Naem, too, instead of Nam.

The father had come to Seoul from his own hometown, Daegu, also unannounced, and has been waiting outside the locked apartment.

The father and son have no choice but to spend the evening together outside the door in the hallway. The son takes his father to a few places: an optometrist’s office, the public baths, a restaurant and then a men’s clothing store.

While at the public baths together, the son notices a long scar under his father’s armpit that he had not known about, a scar left by a bullet wound he suffered during the war.

“Outside the Door,” rather than inside the house, the son begins to see his father from a different perspective, a father that he has so far regarded as grossly incompetent for having left his family in poverty. The son eventually understands the rough times through which his father has lived, the people he has met and his agonies.

Any resentment or suspicions the son long had against his father eventually start to melt away.

“This medium-length novella does not depict any serious events or difficult problems and therefore, does not propose any solutions,” said literary critic Kim Han-sik.

“All it does is serenely narrate the realities we face, compelling us to think about the lives of the people around us, both previous and future generations.”

The critic continued to say that, “It also gives us a chance to ponder the changed definition of ‘home’ and the burden of life the father, as head of the family, alone had to shoulder. Above all, the work is a serene and frank narrative that describes with affection and without exaggeration the image of an ordinary father who has lived a life of the timid.”

Born in 1942 in Osaka, Japan, Lee Dong-ha spent his youth in Daegu, Gyeongsangbuk-do (North Gyeongsang Province), and elsewhere across the region. In 1969, the writer graduated from the Sorabol Art College, which has now merged with Chung-Ang University, with a degree in creative writing.

After graduation, he served as an editor for a school newspaper and then as a literature professor at Chung-Ang University.

In 1966, Lee made his literary debut with his first short story, “War and Squirrel.” The same year, his first full-length novel, “Gloomy Homecoming,” won a competition sponsored by Contemporary Literature, a magazine.

His other works include his first collection, “Sand,” and other collections of short stories, “The House of the Wind” and “Valley After Dark,” as well as his collections of slightly longer novellas, “Toy City” and “Research on Violence.”