Several bronze drums welcome visitors as they enter the exhibition hall. Inside, a drumming sound resonates, but the metal drum beats sound quite different from the more common wooden ones. These bronze drums, crafted in ancient Vietnam, symbolize the pride and tradition of the country.

This exhibition, “Ancient Civilization in Vietnam, the Early Morning in Red River,” is being held by the National Museum of Korea to introduce the historical background of ancient Vietnam and to highlight some of the similarities with ancient Korea.

The exhibition highlights the late Bronze Age and early Iron Age cultures that flourished during the Dong Sun era of ancient Vietnam, roughly 1,000 B.C. to A.D. 100. Archeologists believe that Dong Sun culture originated along the middle reaches of northern Vietnam’s Red River in around 500 B.C. The museum has on display about 380 artifacts from ancient Vietnam, including 14 bronze drums, earthenware, accessories and everyday objects owned by the Museum of Vietnamese History in Ho Chi Minh City. 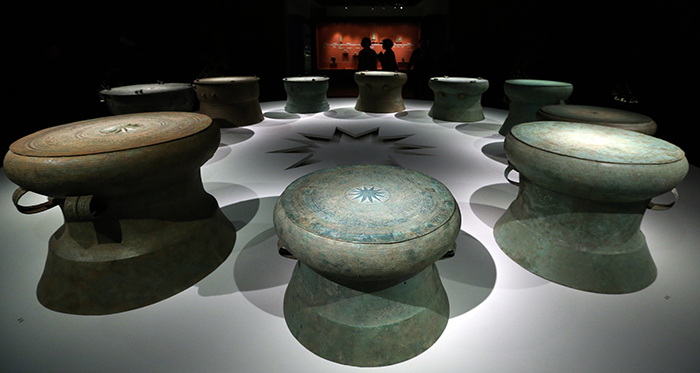 Bronze drums in a variety of sizes and shapes capture the eyes of visitors as they enter the exhibition hall.

These drums are decorated with a sun in the center and are engraved with various other decorative patterns. (photo: Jeon Han)

The exhibition is composed of three parts: prehistoric Vietnam before Dong Son culture; Dong Son culture and the Red River; and, the Bronze Age in central and southern Vietnam (unofficial translations).

In the first part, visitors can learn more about Bronze Age Vietnam as they are introduced to the Phung Nguyen, Dong Dau and Go Mun cultures that existed from around 2,000 B.C. to 500 B.C., somewhat before Dong Son culture. 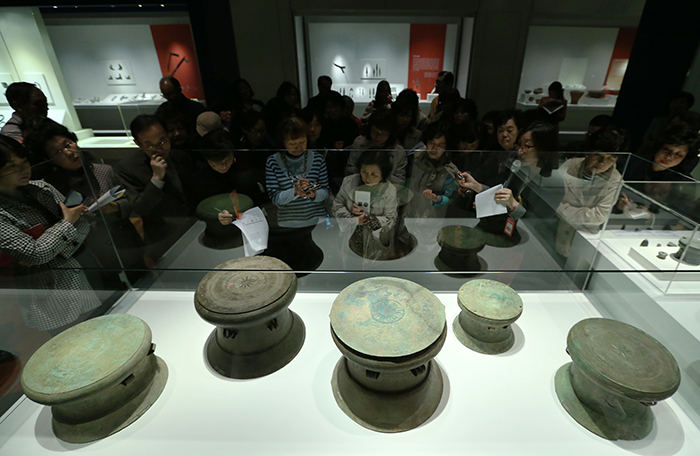 and developed into one of East Asia’s most sophisticated Bronze Age cultures. (photo: Jeon Han)

The second part introduces the peak of ancient Bronze Age Vietnam by showing many ancient artworks and artifacts, including bronze drums, agricultural tools from the Red River Delta and items from the Dong Sun people. The highlight is the several bronze drums, considered to be the quintessence of Bronze Age Vietnam. According to the museum, these drums were made as early as 500 B.C. Their unique shapes and decorative patterns on the surface capture the eyes of museum visitors. These drums were initially made as musical instruments, but were eventually used as a medium of trade or currency and have even been considered objects of worship. They also reflect the life style of the ancient Vietnamese people, as the bodies of some of the drums are engraved with pictures from the time, showing people dancing, playing musical instruments and boarding ships.

The second part of the exhibit shows everyday objects, like agricultural tools and personal accessories, like hairpins, bracelets and belts. The Dong Son people are said to have established the first Vietnamese state, Van Lang, which lasted from 697 B.C. to 257 B.C. During these times, many weapons and tools were made of bronze. The various, sophisticated patterns that decorate the bronze spears, arrowheads and daggers on display are some of the exhibit’s must-see items. 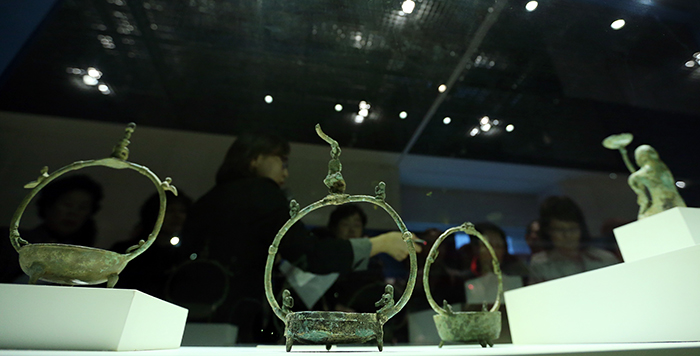 Bronze three-legged lamps have a rounded handle. These lamps were initially made to be hung from a pole or a tree. (photo: Jeon Han) 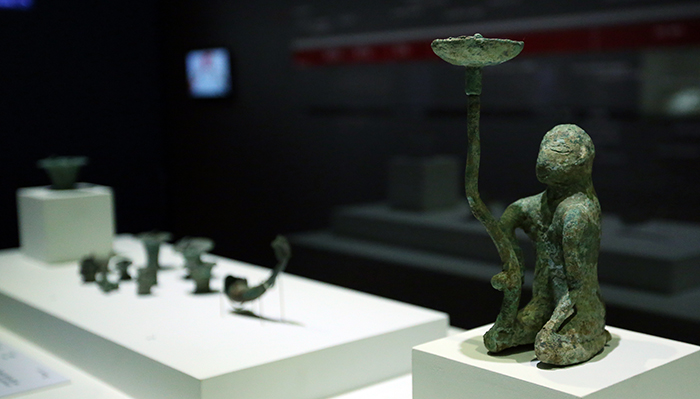 A bronze lamp is shaped like a human body. (photo: Jeon Han) 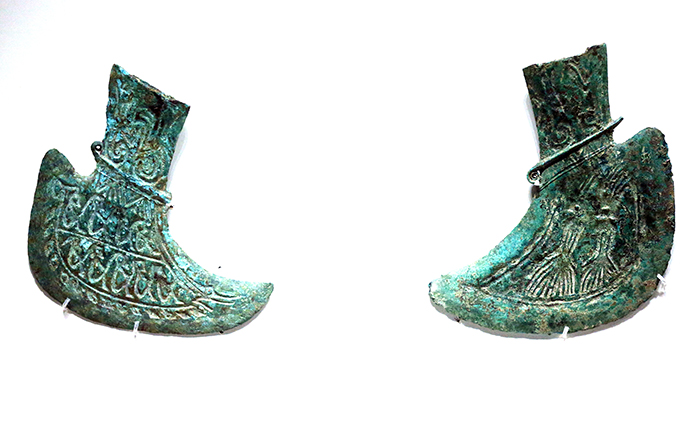 In the third part of the exhibit, visitors can learn about the maritime trade that took place during the later Iron Age Sa Huynh culture, roughly 500 B.C. to A.D. 100. The exhibit also shows what was believed to be the afterlife of the Sa Huynh people and the Dong Nai culture, both from central and southern Vietnam, with related artifacts like bronzeware, earthenware and other accessories. The Sa Huynh culture flourished along the coastal regions of central Vietnam during the Bronze Age and early Iron Age. The exhibition shows the unique funeral traditions and jar burials of the Sa Huynh people. The exhibit compares these to Korean methods of jar burial, a tradition found to be from about the same time period as those in Vietnam.

The exhibition will run from April 29 to June 29 at the National Museum of Korea. The museum offers free admission and is closed every Monday. More information is available at its homepage, with services offered in nine languages. https://www.museum.go.kr/ 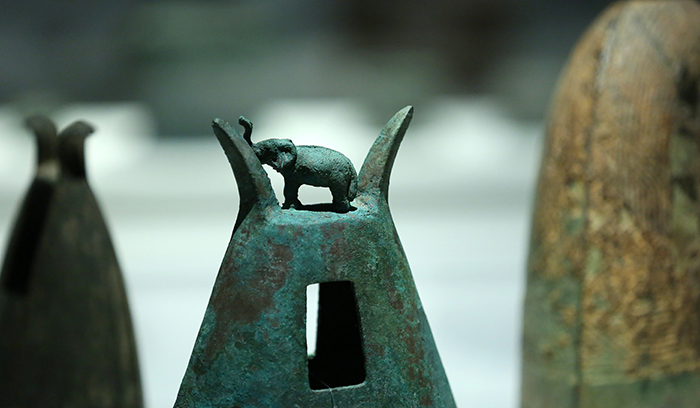 Bronze musical instruments are some of the most-found artifacts at Dong Son archeological digs.

The bell in the center has two horns and is decorated with an elephant-shaped ornament. (photo: Jeon Han) 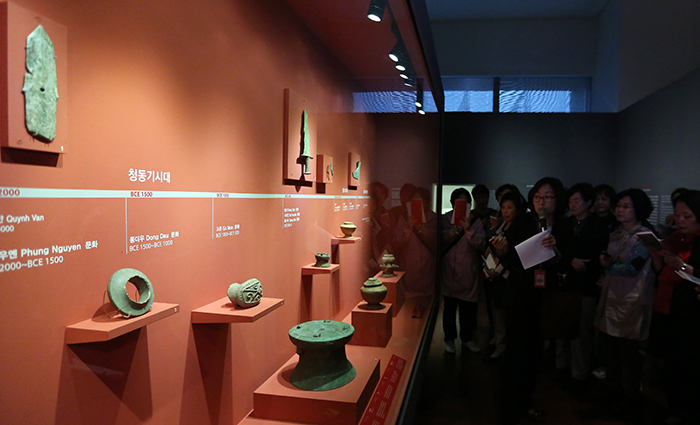 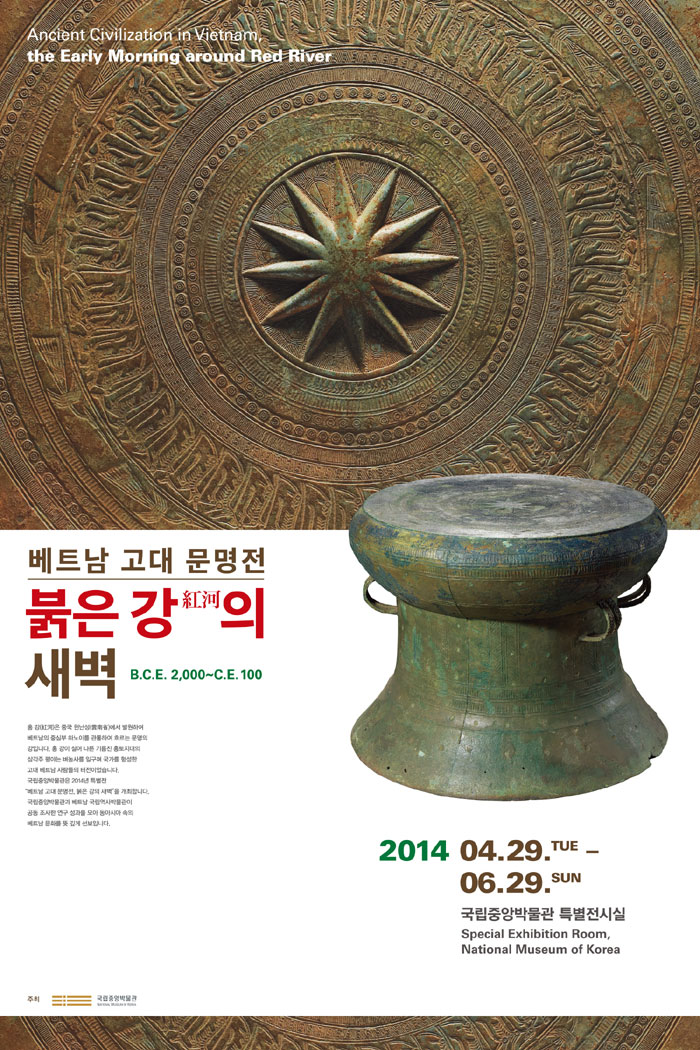 A poster for the exhibition. (image courtesy of the National Museum of Korea)