Take to the skies at the Jeju Aerospace Museum

Already blessed with tropical plants and a volcanic landscape, Jejudo Island, one of the most famous Korean tourist destinations, has now gained another attraction: the Jeju Aerospace Museum. The Jeju Aerospace Museum recently opened its doors to the public.

Covering both aviation and space travel, this museum, the largest space and flight museum in Asia, recently opened its doors to the public. The three-story building covers 329,938 square meters in Seogwipo City, the island’s second city located on the southern coast.

On the first floor, people can find the Aviation History Hall. The Astronomy and Space Hall is located on the second floor. Amenities like a cafeteria, shops and an observatory are on the third floor. Museum visitors can learn more about the history of aviation technology, the early years of the Korean Air Force, the principles and mechanisms of flight and can even catch a glimpse of the future of aviation with various visual effects, videos and exhibits.

A total of 35 retired war planes were provided by the Korea Air Force and are on display both in the adjoining grounds and in the Aviation History Hall on the first floor. These planes were all at one point used in active duty by the Korea Air Force. Some of the planes indoors are hung from the 30 meter-high ceiling. A replica of the flyer used by the Wright brothers, some of aviation’s earliest pioneers, is also on display inside the building.

Visitors can learn more about the history of the Korean Air Force in the first floor’s Air Force Gallery. They can also learn about the principles and mechanics of flight with more than 40 airplane and wing models in the How Things Fly gallery, a cooperative project with the Smithsonian National Air and Space Museum in Washington, D.C. 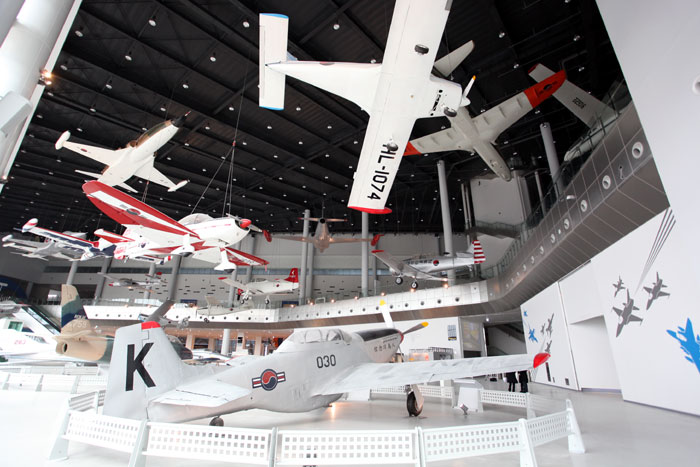 Airplanes are hung from the ceiling. These planes were all at one time used by the Korean Air Force.

On the second floor, the Astronomy and Space Hall introduces the history of astronomy and the technology used to make astronomical observations in both Europe and East Asia. A related exhibit covers the Cheomseongdae, an observatory tower constructed during the Silla Kingdom (57 B.C.-A.D. 935). There is also a giant panorama showing all of the night sky’s constellations.

In the hall, visitors have the opportunity to learn about the history of space exploration, all while appreciating related exhibits, such as a life-sized replica of the Curiosity rover, the car-sized robot currently exploring Mars, a model of a space station and replicas of Korea’s Naro space rocket.

Five themed zones can also be found on the second floor, to amuse children and students. Included are the 5D Circle Vision Polaris, the Dome Theater Canops and the Arius theater. The 5D Circle Vision Polaris is especially good for young visitors and those with little children. Its 5 meter-high, 50 meter-long screen shows an interesting adventure of aliens who travel to Jejudo Island from space. Next door to this, the dome-shaped screen of the Canops theater projects visual images onto the ceiling. The dome is 15 meters in diameter. The third theater, Arius, was jointly designed with the Central Astronomical Observatory of the Russian Academy of Sciences. A total of 27 TV monitors and a 30 meter-long screen show various pictures and videos from space, to stimulate museum-goers’ interest in the universe beyond our planet. Visitors can learn about the principles and mechanics of flight in the How Things Fly gallery.

If you need a rest or feel like some refreshments, head to the third floor where there is a cafeteria and various shops. From the 40 meter-high open observation platform, people can enjoy a wonderful view of the island and can see as far as Marado, one of the southernmost islands of Korea sitting 8 kilometers off the Jejudo Island shore. The museum also runs a hotel, which can accommodate up to 500 people, and a campground.

Tickets are  KRW 15,500 for grownups or 13,000 for kids and teen-agers to see the first floor and the Astronomy and Space Halls on the second floor. There are also KRW 23,500 / 19,500 tickets that additionally give access to the themed zones on both the first and second floors. Children aged under 36 months get in for free. The museum is closed on the first and third Mondays of the month.

More information about the museum is available at its homepage https://www.jdc-jam.com/main/index.do or at https://english.jdcenter.com/doc/sub2/sub255.jsp Jointly built with the Central Astronomical Observatory of the Russian Academy of Sciences, the Arius theater shows pictures and videos from outer space.

The museum hosts a cross-section of Korea’s Naro space rocket. A life-sized replica of the Curiosity rover, the car-sized robot that is currently exploring Mars.

All photos are courtesy of the Jeju Aerospace Museum.