Gyeongju: experiencing the glories of a golden age

Gyeongju is frequently called an “outdoor museum,” and for very good reason. As the ancient capital of the Silla Kingdom (57 B.C.– A.D. 935), the town and its environs are dotted with temples, shrines, palaces and ruins from the golden age of Korean classical civilization. To properly explore it, you’d need to set aside weeks if not months, but a weekend should be sufficient to take in the highlights.

The main courtyard of Bulguksa Temple, with its famous stone pagodas

According to legend, Gyeongju was founded in 57 B.C. by Bak Hyeokgeose, the first king of Silla. Like its European contemporary, the Roman Empire, Silla grew from a small, remote city-state into a mighty kingdom. Through skilled diplomacy and martial brilliance, Silla defeated rival kingdoms and even the forces of Tang China to bring most of the Korean Peninsula under its control by A.D. 676.

As the fortunes of Silla rose, so did those of its capital, Gyeongju. At its height, the city was home to one million, making it one of the greatest cities of Late Antiquity. Tales of its grand palaces made their way along the Silk Road to China and beyond.

Unfortunately, Silla’s—and Gyeongju’s—glory was not to last. As the kingdom entered its later period, local aristocrats grew in power and uprisings grew frequent. By the late 10th century, the provinces were in open revolt.

In 927, a rebel army sacked Gyeongju, killing the king. The last king of Silla abdicated in 935 in favor of King Taejo, the founder of the Goryeo Dynasty. Under Goryeo, the city continued to prosper, but in the 13th century, an invading Mongol army sacked Gyeongju again, destroying many of its monuments. It was a disaster from which the city never quite recovered. 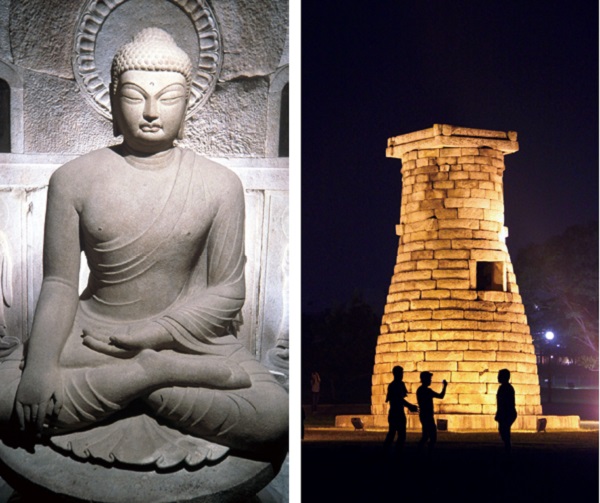 Many of Gyeongju’s best known historic sites are located in the southern part of town. The most recognizable sites are the Silla mound tombs, or tumuli, of which there are over 200 strewn about town. Daereungwon (Tumuli Park) has about 23 tombs, including the famed Cheonmachong (“Horse of Heaven Tomb”), the tomb of an unknown 5th century Silla king.

Near the park is Cheomseongdae, Asia’s oldest surviving astrological observatory, and the ruins of Banwolseong Palace, a lovely spot in spring when the surrounding fields of canola flowers bloom. Just beyond that is the site of the East Palace and Wolji Pond, an ancient royal pleasure garden. When lit up in the early evening, the pond becomes one of Korea’s most photogenic night scenes. Just across from the East Palace is Gyeongju National Museum, arguably Korea’s finest museum outside of Seoul.

The gems of Silla civilization are nestled on Mt. Tohamsan, a sacred peak overlooking the East Sea. Here you’ll find Bulguksa Temple, an awe-inspiring eighthcentury Buddhist monastery, and the Seokguram Grotto, a rotunda housing one of the most beautiful Buddhist statues in East Asia.

Founded in 774, Bulguksa is a masterpiece of Korean traditional architecture that makes sublime use of the surrounding landscape through a series of stone and earth terraces. It is home to six National Treasures, most notably the two giant stone pagodas in the courtyard. Built around the same time as the temple, the Seokguram Grotto occupies an artificial cave overlooking the East Sea.

Under a stone dome sits a 3.5 meter-high stone Buddha wearing a sublime smile. The sunrises from this location are some of the most beautiful in the land. It is said the Buddha overlooks the watery grave of King Munmu of Silla (r. 661–681), who was buried in a tomb under the waves of the East Sea. 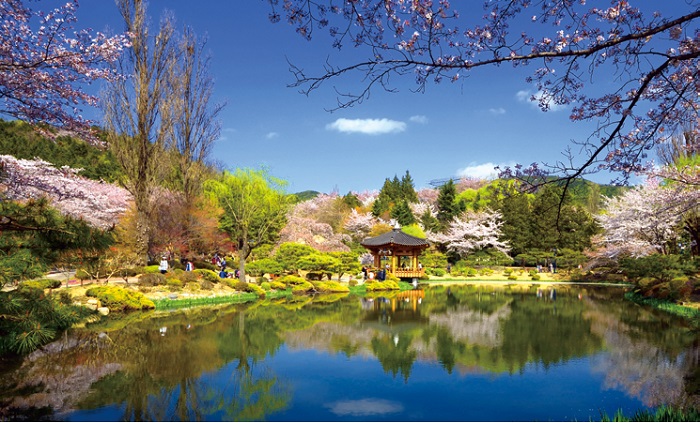 A bit off the beaten path is Mt. Namsan (494 meters), a lowlying massif overlooking the town. In the days of Silla, the peak was covered with temples, hermitages and works of Buddhist art. Even today, the slopes are dotted with ancient pagodas, Buddhist statuaries and dramatic cliff carvings. The pine forests on the lower slopes are some of Korea’s most famous.

A more modern destination is the scenic Bomun Lake area, a popular recreation area east of town. It is most famous for its cherry blossoms in early April. The lake is also home to most of Gyeongju’s upscale hotels.