Opera festival hits Seoul in May

May will be an exciting month for opera fans this year. The fifth Korea Opera Festival will take place at the Seoul Arts Center (SAC) in southern Seoul. This year’s festival focuses on heroines who fall in love, their passion leading them onward to happiness or destruction. Salome is swept of her feet in fatal desire. Madame Butterfly waits for her husband to return, but commits suicide in the end. Delilah lures Samson to his demise, and Seohyang fights tradition to seek out true love.

The opera “Salome” will be staged from May 2 to May 4 to mark the 150th birthday of German composer Richard Strauss. Salome is a Biblical figure who plays the role of femme fatale, an icon of dangerous seductiveness. She dances before her stepfather, Herod, to win the head of John the Baptist. The aria during the “Dance of the Seven Veils” (Tanz der Sieben Schleier) is the opera’s most famous piece. Maurizio di Mattia, who worked as a director at the Teatro dell`Opera di Roma, the Rome Opera House, and also at the Arena di Verona, the Verona Arena, will direct the opera. Going into the future, the opera will be set in the year 2114 and will show a minimal, but grand, stage design. 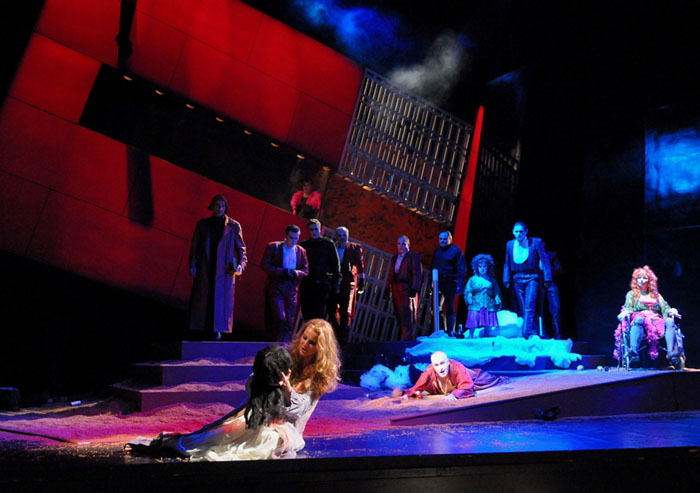 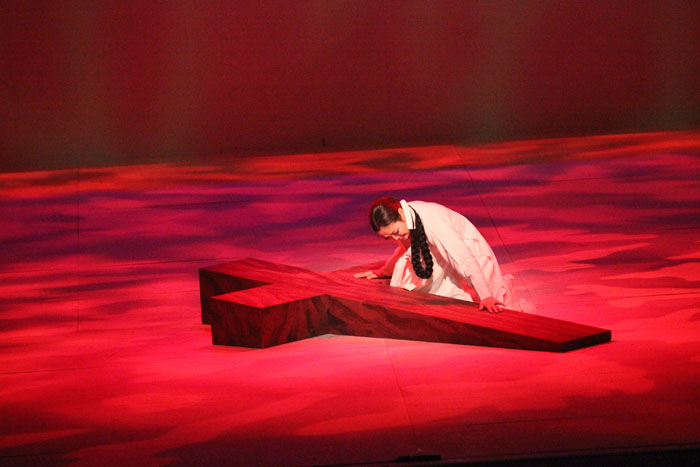 Scenes from the operas “Salome” (top) and “Lutgarda.” (photos courtesy of the SAC)

The opera “Lutgarda,” premiered by the Honam Opera Company in 2013, combines conventional European opera and Korean pansori, a form of traditional narrative singing. It has taken the opera company three years to produce. The opera is set in 1801 during a great persecution of Catholics, one of the many purges that took place as Catholicism arrived and spread across Korea. The two main lovers, John and Lutgarda, vow to keep their virginity for the sake of their faith and undergo a fake marriage, but they agonize about desire, faith and death, before finally dying as martyrs. The opera will be staged on May 9 and 10.

“Madame Butterfly,” one of the most popular repertoire items of all time, depicts the tragic love between a U.S. naval captain and a geisha. The opera tells of the heroine’s fate, that starts with love, changes to waiting and betrayal and ends in despair and death, all with beautiful melodies. The heroine sings “One beautiful day, we will see” (Un bel di vedremo) in her belief that her husband will return, and “Humming Chorus” (Coro a bocca chiusa) as she spends a sleepless night, ones of the most famous and touching arias by Puccini. Daniele de Plano, former artistic director of the Puccini Festival in Italy, will direct the opera. Paintings by Hiroshige Ando (1797-1858) will be projected onto the immaculate white stage throughout the opera. It will be staged by the Gloria Opera Company on May 16 and 17. 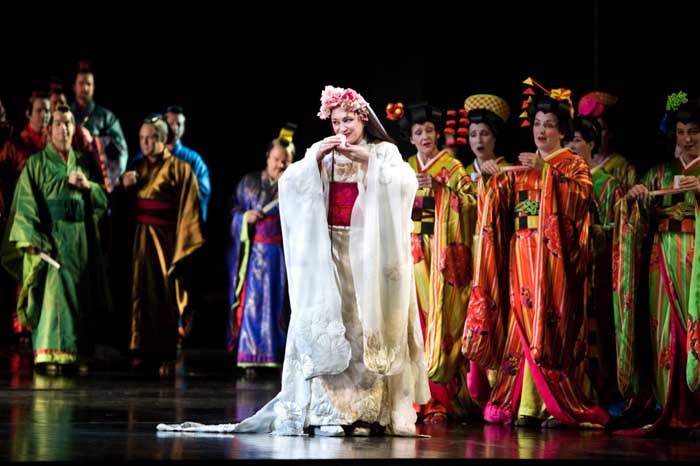 Scenes from “Madame Butterfly” by Puccini (top) and “Samson et Dalila” by Charles Camille Saint-Saens. (photos courtesy of the SAC)

“Samson et Dalila,” by French composer Charles Camille Saint-Saens, portrays the two Biblical figures from the Old Testament. Delilah sings “Softly awakes my heart” (Mon coeur s’ouvre a ta voix), one of the famous arias in the opera, as she replies to Samson, who has fallen in love with her and is proclaiming his love. The “Bacchanale” is an erotic dance that symbolizes heathenism, and is one of the opera’s must-see performances. The opera will be staged by the Beseto Opera Company from May 23 to 25. Jiri Mikula from the Czech Republic will conduct the Seoul Philharmonic Orchestra and Enrico Castiglione from Italy will direct the opera.

The final opera hitting the stage this May is “Soul Mate,” which will be staged on May 31 and June 1. It tells the story of Seohyang, a girl who refuses to accept a conventional arranged marriage and insists on finding true love. The opera is an adaptation of the play “Maengjinsadaek Gyeongsa,” or, “The Happy Days of Jinsa Maeng.” The opera was premiered by the Korea National Opera in 2006 before being staged in Japan and China. German media outlets praised the opera, saying that it is, “better than Puccini’s operas,” and that, “it is an idealistic marriage of rich Korean culture and European elements.” The opera features both traditional Korean sounds and Western opera music, and the picturesque wedding scene is spectacular. 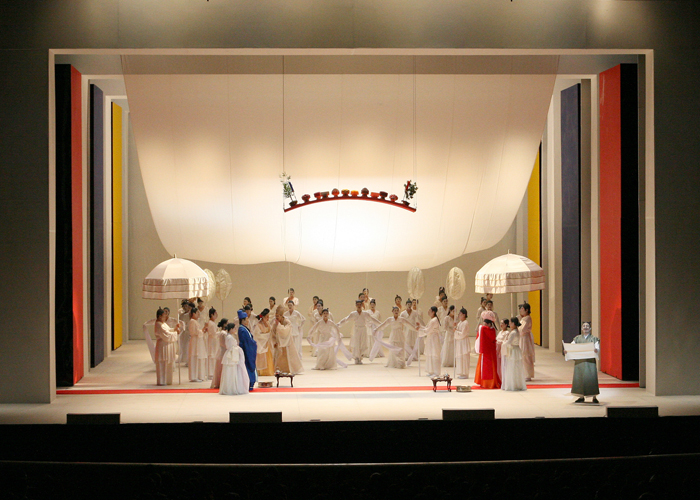 The final opera to be staged this May, “Soul Mate,” portrays Seohyang as she fights against tradition and seeks true love. (photo courtesy of the SAC)

In addition to the five operas coming to Seoul this May as part of the fifth Korea Opera Festival, there will be an open-air concert featuring many famous arias and songs. The festival’s “opera concert,” which was a sensation last year, will be staged once again on the outdoor stage at Shinsegae Square at the Seoul Arts Center. This free concert will take place at 6 p.m. on Saturday May 17 and again a week later on May 24, and feature popular arias for opera fans.

For ticket information, please call the Seoul Arts Center at 02-580-1300 or visit www.sacticket.co.kr. 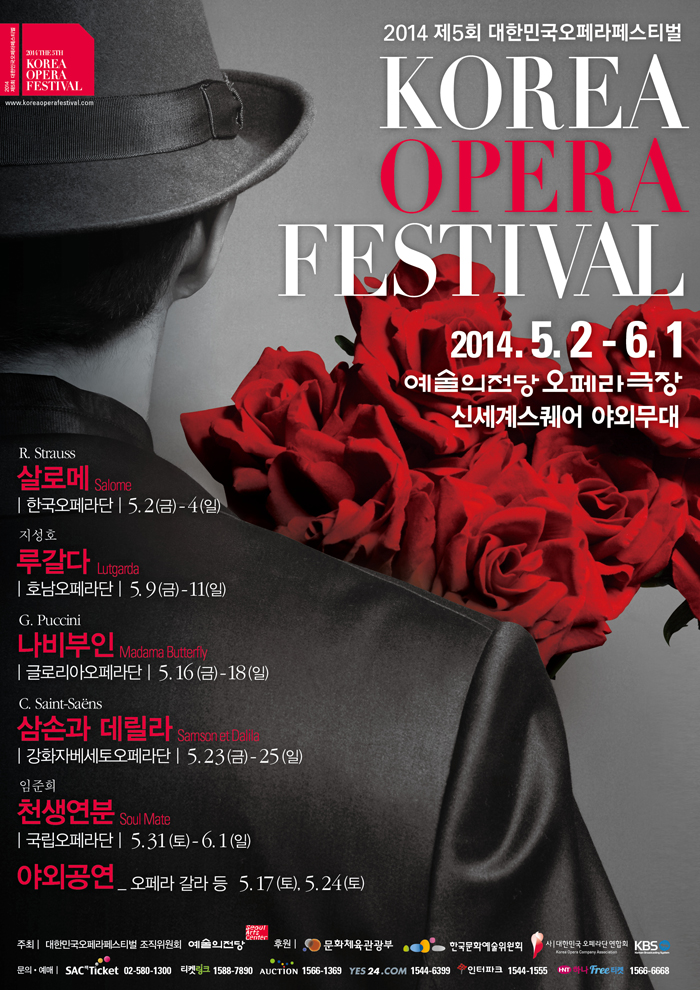 The Korea Opera Festival runs throughout May. (image courtesy of the SAC)