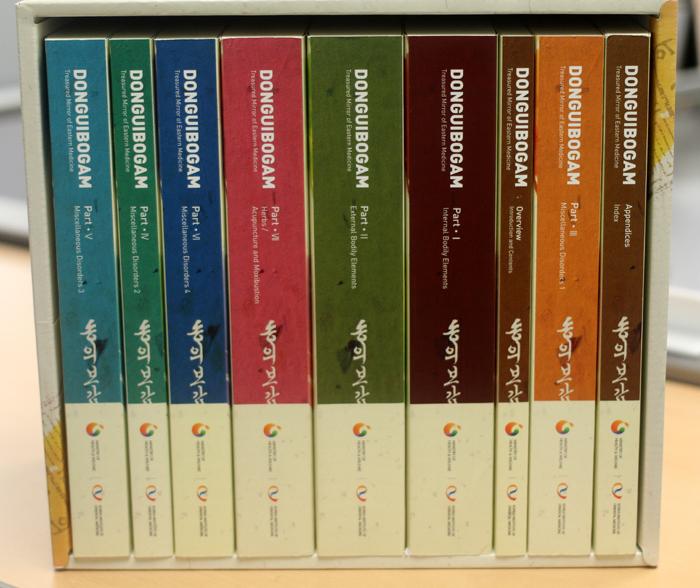 Korean Medicine has a long history of several thousand years, forming an East Asian Traditional Medicine axis along with Traditional Chinese Medicine, Kampo Medicine in Japan, and Traditional Vietnamese Medicine. It is compatible with biomedicine in Korean society in both organizational and cultural aspects, taking a primary responsibility for national health care. The Dongui Bogam (Treasured Mirror of Eastern Medicine, 1613, 동의보감 東醫寶鑑) is a representative text of Korean Medicine. It was written in 1610 by Heo Jun (1539–1615), a royal physician of Joseon, Korea, and printed in 1613 by the Joseon government. It is not only a chief representative work of Korean Medicine, but was also published dozens of times in various East Asian nations, such as China, Japan, and Vietnam. After the liberation in 1945, the Dongui Bogam has provided the basis of modern Korean medicine education. Moreover, in 2009, UNESCO recognized its first edition, published in 1613 by the government, as a Memory of the World (Invaluable Documental Heritage). In 2013, a complete set of the Dongui Bogam was translated into English with governmental support. Currently, various studies are being conducted based on theDongui Bogam for efforts toward the globalization of knowledge within and about the Dongui Bogam.

The Dongui Bogam and its author, Heo Jun, are familiar icons in Korea. They have provided a motif for a number of dramas and documentaries about early-seventeenth-century Korea, and most of culture and industries related to traditional medicine take advantage of them directly or indirectly. Almost every specialist in traditional Korean medicine owns the book. It is widely believed in Korea that “Curing the mind comes first to curing the illness,” which is the healing principal that Heo Jun recommended. Since the Joseon Dynasty used Chinese characters, the original text of the Dongui Bogam is written in Chinese. However, many different versions of it recently came out in the Korean language, and a variety of health books, and academic publications have been published on the subject of the rich contents of the Dongui Bogam. The Dongui Bogam has now become an icon for Korean medicine and thus represents a trend so popular as for bookstores nationwide to set up a special section for it. The Dongui Bogam’s significance, however, is not limited to its symbolic value as an icon of Korean traditional medicine. Its practical effectiveness also deeply adds to its importance in Korean medical culture. The Dongui Bogam has played a significant role as a core text for the modern educational program of Korean Medicine, while it set standards for creating new policies on preserving Korean medicine. Even today, Korean medicine clinics all over Korea widely use herbal formulas, acupuncture treatments, and other therapeutic measures based on or related to the original contents of the Dongui Bogam.

Heo Jun is also known as Cheongwon (淸源) and his pen name is Gu’am (龜岩). He is the 20th generation down from the founder of the Yangcheon Heo clan (陽川許氏), Heo Sunmoon (許宣文). His birthplace is known as Gayangdong, currently Gangseo-gu in Seoul. Although he was born into a noble family, as the child of a concubine he was forced to choose medicine as his occupation. He became a royal court physician in his early 30s and reached the status of the king’s physician by the age of 37, when his abilities were widely acknowledged.

The compilation of the Dongui Bogam was an endeavor at the national level. Heo Jun was granted the task by virtue of the trust and reliance he had built over the years. According to the Seonjo Chronicle (宣祖實錄) dated July 2, 1604, “Heo Jun is knowledgeable of all the medical texts and superior in the usage of herbal medicine.” Such appraisals suggest the extent of his academic achievements and medical expertise. Around 180 books are referenced in the Dongui Bogam, including medical, Buddhist, historical, Taoist, and other types of texts. Heo Jun’s knowledge in various subjects is well defined throughout the book. He also maintained the original interpretations of cited works, while adding his additional reasoning, which served as a good example of an important distinction between primary sources and commentary for writers of medical texts to follow in future generations.

Heo Jun’s clinical expertise was also well received. In 1590, he successfully treated the crown prince of smallpox. As a reward, King Seonjo elevated his rank to a tertiary government post. While other doctors had been fearful of the risk in tending the crown prince, Heo Jun boldly treated him with ease. Later, when the crown prince reached the throne, the new King repaid Heo Jun for saving his life.

In 1592, war broke out between Korea and Japan, and King Seonjo moved to Euiju (義州). During the evacuation, Heo Jun escorted the king and earned his deep trust. This trust earned him the order to begin the compilation of the Dongui Bogam in 1596. In the same year, he was honored with a secondary government post for the successful treatment of the then crown prince. In 1600, when the head royal physician, Yang Yesu (楊禮壽), passed away, Heo Jun succeeded in his position, but he did not slow down his work on the book. But in 1608, when King Seonjo passed away,Heo Jun took responsibility for the death and was therefore exiled to Euiju; however, this incident also provided an opportunity for him to concentrate fully on the Dongui Bogam compilation, which he completed in 1610.

*This series of articles about the Dongui Bogam has been made possible through the cooperation of the Korea Institute of Oriental Medicine.