Nine state seals from the Joseon Dynasty (1392-1910) will finally be returned to Korea after they were transferred to the United States during the Korean War (1950-1953) over 60 years ago. The U.S. government announced earlier that it would return the seals in time for American President Barack Obama’s official visit to Korea on April 25 and 26.

According to the Cultural Heritage Administration (CHA), the three most important seals among the nine are theHwangjejibo, the Yuseojibo and the Junmyeongjibo, all of which were used officially for administrative purposes.

The Hwangjejibo was produced in 1897 to mark the proclamation of the Daehan Empire (1897-1910). TheYuseojibo was applied to documents when regional government officials were appointed by the king, and theJunmyeongjibo was employed on letters containing the king’s orders sent to chunbang, or the government office in charge of educating the crown prince.

Another one of the seals, the Sugangtaehwangjebo, was used more symbolically rather than officially. It was produced when King Sunjong (r. 1907-1910) presented the title of Taehwangje, which literally means Great Emperor, on his father, King Gojong (r. 1863-1907), in 1907. The remaining five seals were for personal use by members of the royal family.

The Hwangjejibo is one of the nine Joseon Dynasty seals to be returned to Korea. (photo courtesy of the CHA) 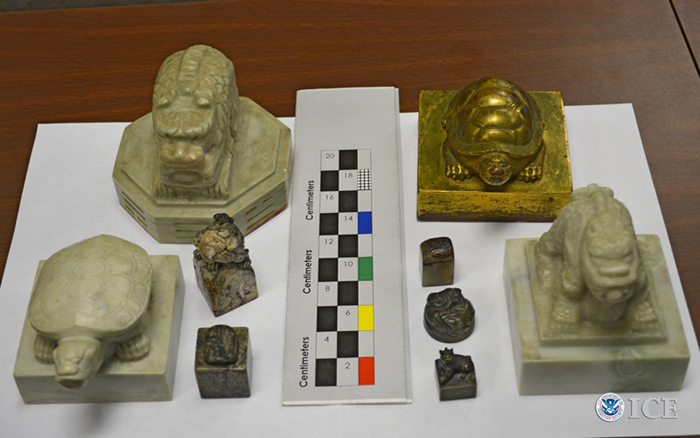 Nine state seals from Joseon times will be returned to Korea in time for American President Barack Obama’s official visit to Korea. (photo courtesy of U.S. Immigration and Customs Enforcement)

These seals were taken from Deoksugung Palace in Seoul during the Korean War before being transferred to the U.S. The U.S. government acquired the seals in November 2013 after reporting their existence to the CHA.

The CHA intends to show the seals to the public at a special exhibition at the National Palace Museum of Korea soon after they are returned.