A series of European musicals will be staged across Seoul this year, beginning with “Le Roi Soleil” (“The Sun King”), which is already running, and moving on to “Mozart!” in June, “Rebecca” in September and “Rudolf” and “Marie Antoinette” in October. Fans are excited with great expectations for the season ahead.

The many successful European musicals in the Korean market actually have a lot of local input. Their scripts and scores are brought in as they are, but local staff is responsible for direction, stage and costume design and choreography. There are sometimes even changes to the script to make it more suitable for local audiences.

“Le Roi Soleil,” which opened in early April, depicts the life of Louis XIV of France, an absolute monarch who reigned in the 17th century. The musical focuses on his relationship with three women in Versailles and portrays his agony as king, with the burden of power, forbidden love and the secrets of the royal family.

Actors Ahn Jae-wook and Shin Sung-rok will play the king, while Kim So-hyeon and Yun Gong-ju will star as Francoise, one of the three women, and Yim Hye-young and Jeong Jae-eun will play Marie. After taking roles in the TV soap operas “Star in My Heart” and “Partner,” Ahn has now become a star and has gained much popularity across Asia, especially in China. He has also appeared in many musicals, including “Guys and Dolls.” Shin was in the recent hit soap opera “My Love From the Star” and was also in the films “Finding Mr. Destiny” and “The Story of My Life.” He has appeared in many musicals, including “Carmen” and “Monte Cristo.” Kim has starred in the musicals “Elizabeth” and “The Phantom of the Opera,” while Yoon has appeared in “Notre Dame de Paris,” “Monte Cristo” and “Man of La Mancha.” 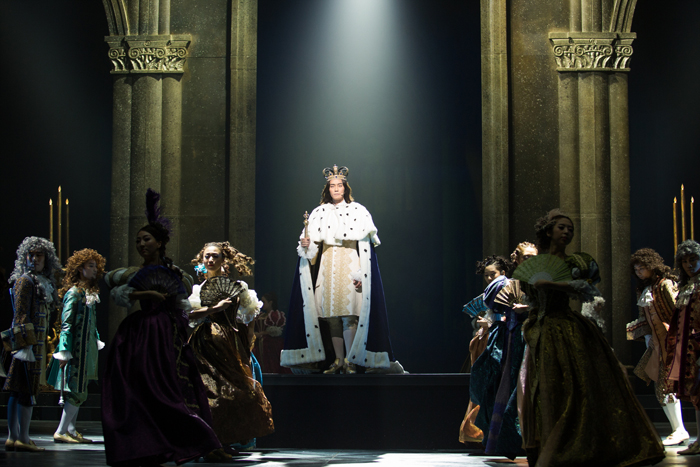 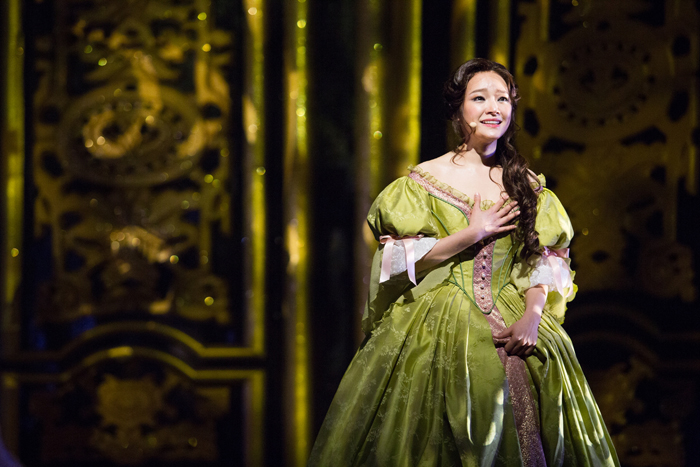 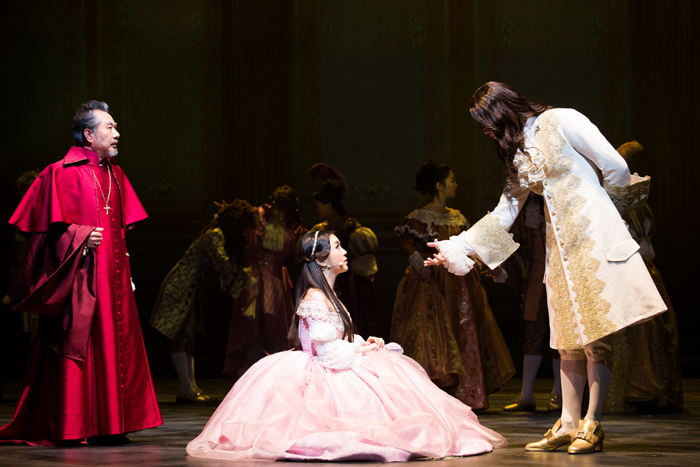 The musical “Le Roi Soleil” depicts the life of Louis XIV of France. (photo courtesy of the EMK Musical Company)

“Le Roi Soleil” is known for its wide range of costumes, as many as 360 set pieces and a magnificent stage designed to portray the life of one of the most powerful monarchs in France. The musical is also famous for its beautiful melodies, a feature which often characterizes French musicals, and its well-organized group dances. The king in the musical wears the highest number of costumes, a total of 15 outfits. What is more, the choreography includes a variety of dance styles, including ballet, acrobatics, pole dancing and contemporary dance, all included in the spectacle.

Unlike other musicals, “Le Roi Soleil” boasts a diverse range of musical styles. Many musicals are based on European classical music, characterized by an orchestra and piano-based sounds, but this piece features powerful rock ‘n’ roll, jazz and rhythm & blues, in addition to classical music.

Most French musicals simply feature the original sound track (OST) playing over the sound system, but for “Le Roi Soleil,” there will be eleven musicians performing behind the stage, in addition to the OST. The live music, with its richness and grand sound, is expected to draw a bigger applause from the audience. The show will be staged until the end of May at the Blue Square performance hall in Yongsan District, central Seoul.

The musical “Mozart!” is a reinterpretation of the life of the legendary composer. The piece features both classical and rock ‘n’ roll music, as well as elaborate costumes and magnificent stage settings. It has received rave reviews from critics and fans alike. The musical was staged in Korea two years ago and since then has undergone major modifications in direction, script and stage design. Three renowned musical actors and singers, Yim Tae-kyung, Park Hyo-shin and Park Eun-tae, will take turns at playing Mozart. The musical will be staged at the Sejong Center for the Performing Arts in central Seoul from June to August. 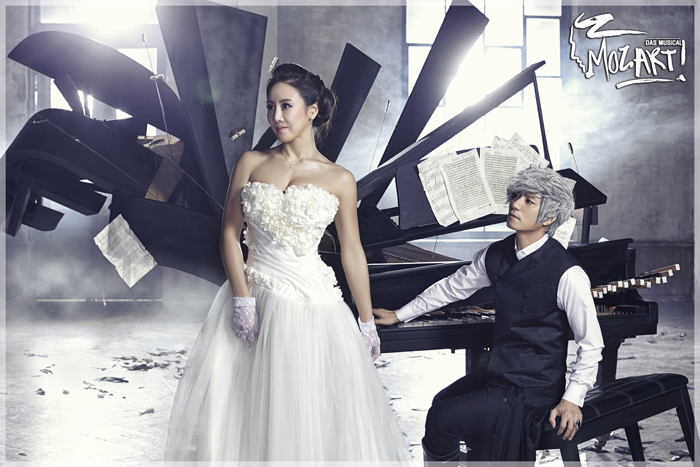 The musical “Rebecca” was produced by composer Sylvester Levay and writer Michael Kunze, the creators of hit musicals “Elizabeth” and “Mozart!” It is based on a novel of the same name published in 1938 by Daphne du Maurier and a film of the same name by renowned director Alfred Hitchcock. The powerful music and the suspense of the plot, combined with well-calculated direction, created a “Rebecca syndrome” in 2013 when it was first staged in Korea. It will also be performed at the Blue Square in Yongsan District, central Seoul, from September to November.

The musical “Rudolf” is based on the true story of Crown Prince Rudolf of Austria, who committed suicide with his lover Baroness Marie Vetsera. It will be staged at the D-Cube Arts Center in southwestern Seoul beginning in October.

The musical “Marie Antoinette” portrays the turbulent life of Marie Antoinette, the wife of Louis XVI, in 18th century Paris and Versailles. It will be performed at the Charlotte Theater in southeastern Seoul, beginning in October.

The popularity of European musicals is attributed to the continent’s rich history and culture. The famous historical and fictional figures, such as Louis XIV, Marie Antoinette, Crown Prince Rudolf, Mozart and even Edmond Dantès from the novel “The Count of Monte Cristo,” make the musicals more approachable for the audience.

“European musicals have something that can satisfy people’s taste in the humanities and it is possible to experience European culture, too,” said Won Jong-won, a critic, explaining the popularity of these musicals. “They are also mostly based on classical music and so they are very appealing.” 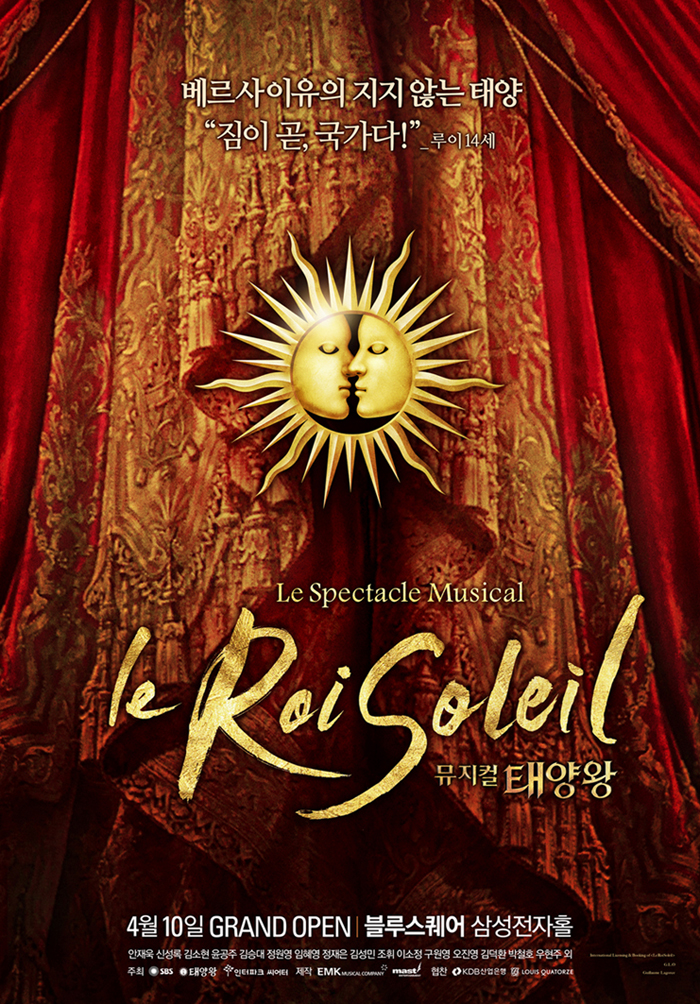 For more information, please contact one of the theaters below.