Evolution of the snack Korea

It has been a few years now since we’ve been able to see overseas tourists heading home with big bags of snacks, filling their suitcases with refreshments at the wholesale markets or supermarkets across central Seoul. They all say that the snacks available here are tasty and cheap.
According to statistics from Lotte Mart, a grocery store, in May 2011, the best selling item purchased by both Chinese and Japanese tourists was not dried laver, or gim, a type of seaweed. In fact, the list of its top-ten best sellers include two types of Real Brownies, both the bundle package and the single packets, made by the Orion Group, and Butter Waffles, made by Crown Confectionary. Real Brownies were in first and second place, and Butter Waffles were ranked ninth. The “golden week” holiday seasons for both Japanese and Chinese tourists, as well as several Japanese holidays and China’s Labor Day holidays, generally occur during the first week of May. Dried laver was the third-best seller.
Other popular snacks include Oh! Yes, Choco Heim, White Heim, Butter Waffles and IVY crackers. All of these have something in common: they are popular overseas as well as in Korea. 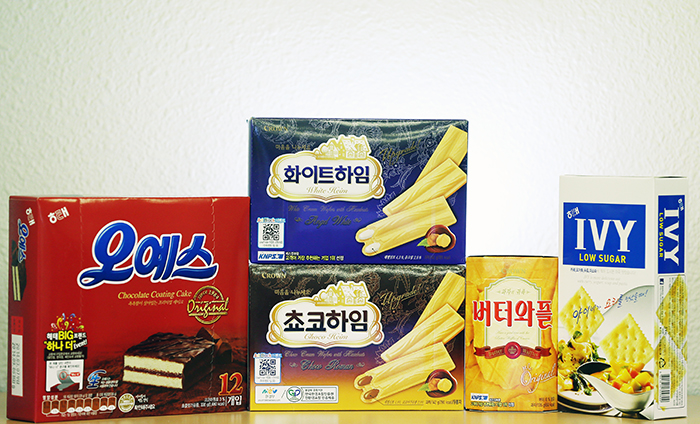 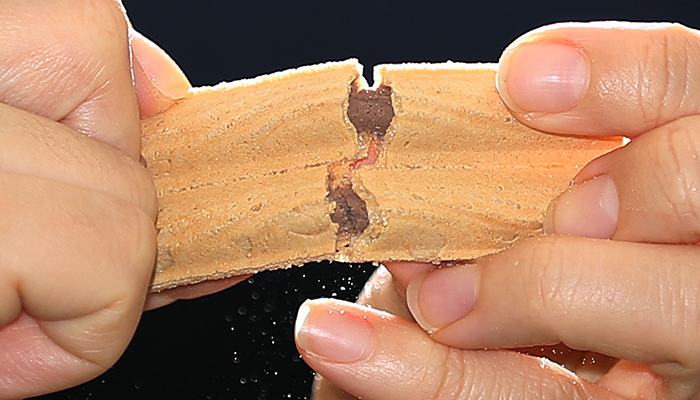 Choco Heim allows you to enjoy the chocolate cream in the middle without it melting onto your hands.

For chocolate lovers, Choco Heim from Crown Confectionary, a leading snack-maker, is one of their all time favorite snacks. The wafers are filled with chocolate cream, allowing people to enjoy the soft, delicious taste of chocolate without getting their hands dirty. Choco Heim roughly translates from the German as, “a house made with chocolate.” It got its name due to the two-layered bar-shaped wafers which surround the chocolate cream filling like a house.
In 2009, Crown introduced its so-called “1 Celsius marketing” campaign, which encouraged consumers to eat the chocolate wafers by putting them in the fridge and enjoying the cool chocolate flavor in a more delicious manner. Thanks to this marketing strategy, its turnover showed more than a 30-percent increase, to record KRW 10 billion in sales more than during the previous year. Its sister product, White Heim, is also winning popularity. These wafers win a favorable response from consumers of all ages, recording accumulated sales of some KRW 1 trillion in 2013.
Kaya Scodelario, a British actress who played the heroine in a 2011 production of “Wuthering Heights,” even praised the wafers in May 2012 after she visited Korea and was given the snack by one of her Korean fans. In her Twitter feed, she said the wafers are, “amazing,” and expressed her hope that she could bring some home with her. 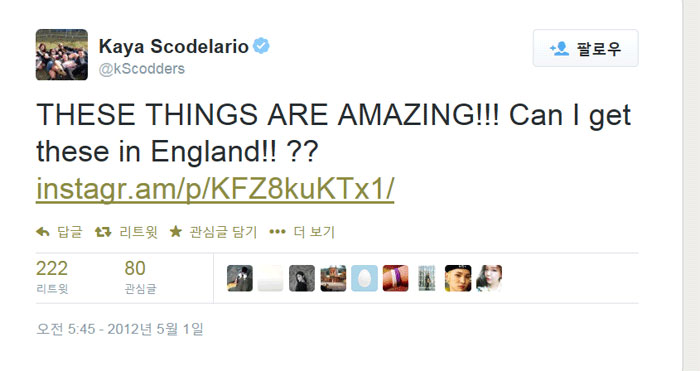 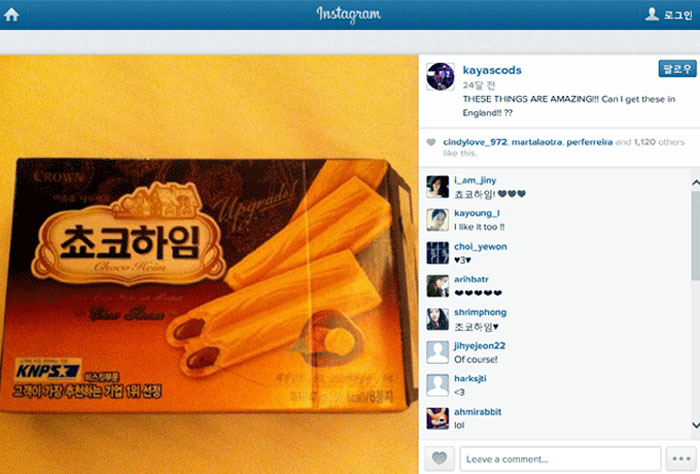 Kaya Scodelario praised Choco Heim in her Twitter feed in May 2012 after trying the snack for the first time during her visit to Korea.

If you feel like something moist and desire a soft chocolate snack, Oh! Yes would be your answer. This chocolate cake is one of the most iconic products of Haitai Confectionery and Foods, another leading snack-maker. This 2 centimeter-thick and 5 centimeter-wide square-shaped chocolate cake offers a soft and moist texture, harmonized with sweet chocolate cream, attracting all kinds of snack lovers. More than 17.3 billion units of this cake have been sold since its launch in 1984. Its sales earned more than KRW 61 billion in 2013.
The soft texture of Oh! Yes differentiates the cake from other confectionary products. According to Haitai, the moistness of the cake is the result of a four-year long research study which the company undertook in order to block microbes and to maintain freshness without using preservatives. Oh! Yes is exported to 15 countries across Asia, Europe and North America. 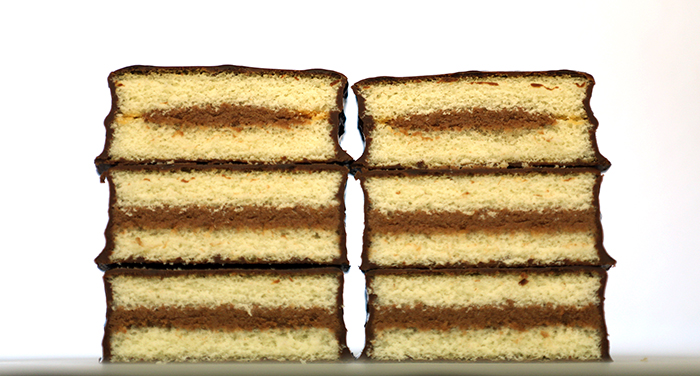 The square-shaped chocolate-covered Oh! Yes offers a soft, moist texture, harmonized with delicious chocolate cream. The above photo shows a cross section of the cake.

If you prefer clean, light biscuits, go for a Butter Waffle or an IVY cracker. Butter Waffles, made by Crown, are characterized for their sweet and soft butter flavor. Made with more than ten percent butter, this oval-shaped biscuit is made with butter from the Netherlands in order to keep its unique butter smell and taste. It wins popularity among consumers across a wide age range, as it is especially good with coffee or any kind of tea. This biscuit also wins popularity among Japanese and Chinese tourists. It has been in the list of top-ten best sellers purchased by tourists every year, capturing the taste of international consumers. Its sales exceeded KRW 33 billion last year. 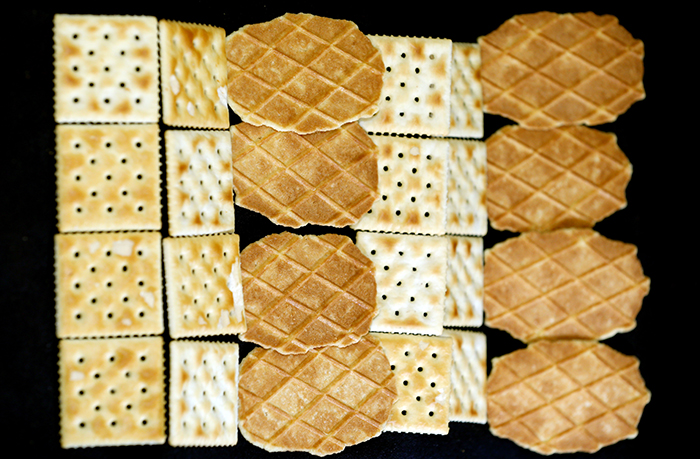 The square-shaped crackers are IVY. Butter Waffles are carved with a diamond-shape.

Haitai’s IVY is made using a yeast fermenting process. It is one of the most popular low calorie crackers in Korea, as it is sugar-free and non-greasy. Since its launch in 1996, this cracker has been used in various “quick bite” recipes, especially for canapés, small, decorative finger foods with cheese, bacon or fruits and vegetables. This cracker is also good to eat as a side dish with wine. Since small quantities of the crackers are packed separately, it is convenient for travelers to carry them inside their bags when flying home. Its sales recorded KRW 10 billion last year.
In the past, people had a misunderstanding that snacks were only for little kids, and regarded snacks as being unsanitary foods. Some of them even questioned whether Korean snacks would ever win the hearts of overseas consumers. However, these misconceptions are not valid anymore. Those who are conscious about health or on a diet can still enjoy a snack. People can also enjoy chocolate snacks without getting their hands dirty with melted chocolate. Those who have weaker teeth can enjoy soft confectionary goods. Snacks are neither for only children nor necessarily unhealthy. Snacks continue to evolve in order to meet the various tastes of their international consumers.