Food tells a story. It tells a story of history, culture and of the lifestyle of each country. Korea has four distinct seasons: spring, summer, autumn and winter. Depending on the season, every corner of the peninsula changes color, whether it is in the mountains, plains, coast or inland. Korea’s climate varies, too, depending on the region. Jeju Island and some southern parts of the peninsula are subtropical while the northern parts of the peninsula can be subarctic. Under such varying environments, the Korean people have adopted and established different food cultures based on from which region of the peninsula they come. Recently, the Ministry of Culture, Sports and Tourism (MCST) and the Korea Tourism Organization (KTO) have jointly chosen to promote 25 local delicacies that represent each province of Korea. In the first installation, Korea.net introduces four delicacies originating from the capital city Seoul and the surrounding Gyeonggi-do (Gyeonggi Province). 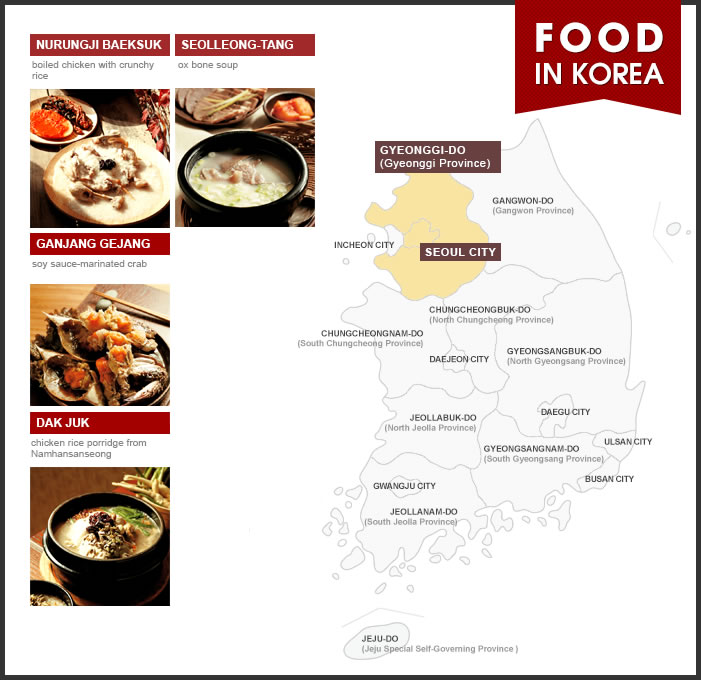 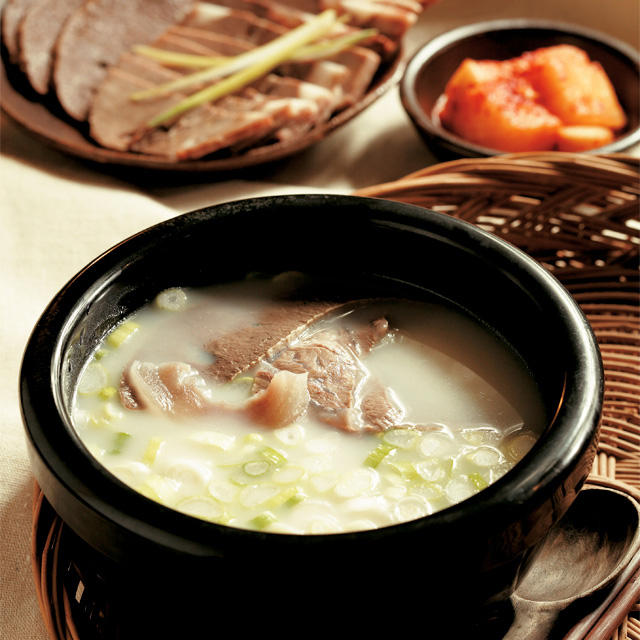 Seolleong-tang is a style of beef soup with chives. (photo courtesy of the KTO)

[Seoul: Seolleong-tang]During the Joseon Dynasty (1392-1910), kings performed ritual ceremonies every year to pray for a good harvest and a bumper crop. The ceremony itself was called a seonnong-je and the altar at which the ceremonies were performed was the seonnong-dan. After the ceremony, the king shared the sacrificial offerings, usually beef, with the people. In an attempt to share with as many of his citizens as possible, the beef was boiled in a huge pot and served as a soup with a handful of meat, usually a leg bone, brisket or some other cut, added to each serving. The soup became seonnong-tang, with an “N,” meaning a soup that was cooked at the seonnong-dan altar. As the name of the dish was passed down orally, it evolved to seollong-tang and finally became seolleong-tang, as we know it today. Boiled beef soup has become widely popular ever since, especially since it can be shared with a lot of people at a relatively low cost and because it is also nutritious. In the soup’s later iterations, people added knee cartilage and other beef leg bones to add flavor to the broth. 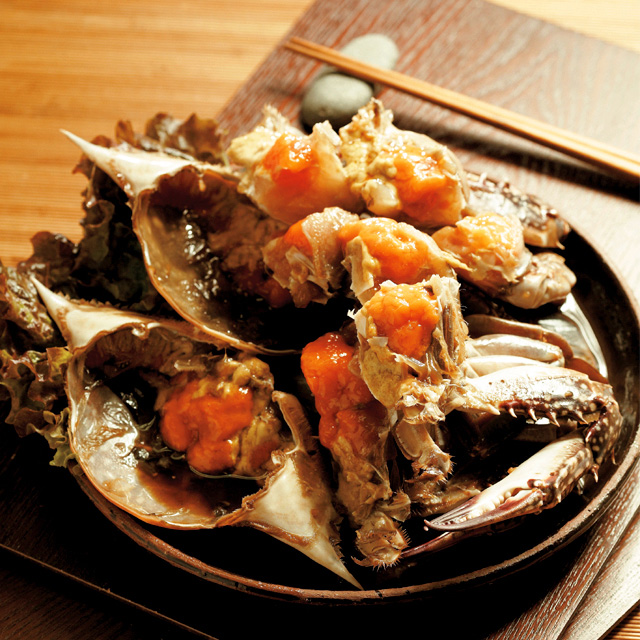 Ganjang Gejang is a marinated crab dish. (photo courtesy of the KTO)

[Gyeonggi-do: Ganjang Gejang]Ganjang gejang, raw crab marinated in soy sauce, is a popular side dish. There are several historical records about ganjang gejang. According to the Sallim Gyeongje, a 17th century guide that can be roughly translated as the “Farm Management” text, crabs were marinated with liquor and salt. Dubbed as a “rice killer,” or, “rice robber,” ganjang gejang has been a beloved dish for over 400 years. Pyeongtaek in southern Gyeonggi-do is known for its abundant rice and crabs. There is an old saying that a woman married to a man from Pyeongtaek would never have to worry about a shortage of food. Crabs from Pyeongtaek are both succulent and delicious. Land crabs from the Imjingang River area, in northern Gyeonggi-do, are also known to be very tasty, with a relatively weaker “crabby” odor to them. Regardless of where in Gyeonggi-do it came, this dish was well-known as being regularly served at the king’s table. 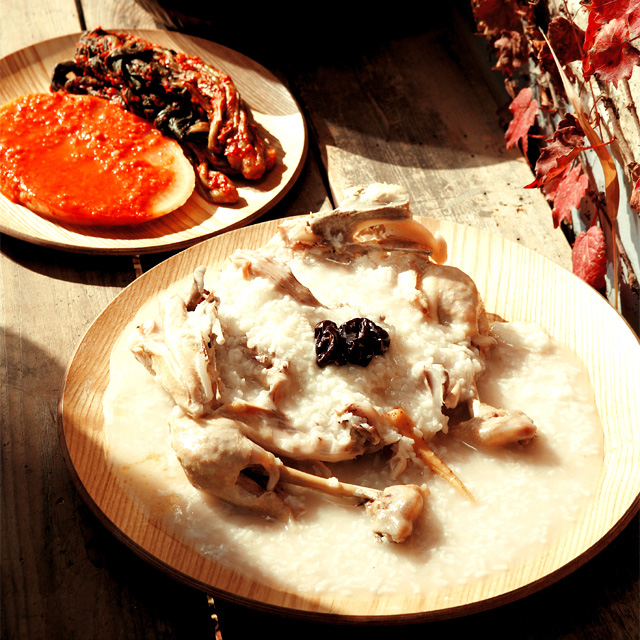 Nurungji Baeksuk is a rice and chicken dish. (photo courtesy of the KTO)

[Gyeonggi-do: Nurungji Baeksuk]Baeksuk, or boiled chicken, has long been regarded as a Korean delicacy, one that gives its eater stamina and strength. Baeksuk itself means a boiled dish that contains no condiments. Dakbaeksuk is similar to samgye-tang, a chicken soup boiled with ginseng, chestnuts and jujube. Unlike samgye-tang, dakbaeksuk is flavored only with water and garlic. The nurungji, the scorched crunchy rice from the bottom of the rice pot, is packed inside the chicken to provide a perfect taste.

This dish traditionally comes from Gwangmyeong in Gyeonggi-do and there is an interesting tale related to this nutritious food. An old woman cooked dakbaeksuk for her grandson. The kid, however, picked out only the chicken and didn’t eat the rice bits. Now, for old people in the olden days it was commonly understood that rice is the basic source of energy. The grandmother, therefore, used a different grain of rice to make the nurungji; she used glutinous rice to make chapssal nurungji. The boy loved its chewy texture and ate it all up. Adults poured what was left over into their baeksuk broth, and it created an awe-inspiring taste. Thus, nurungji baeksuk was created. 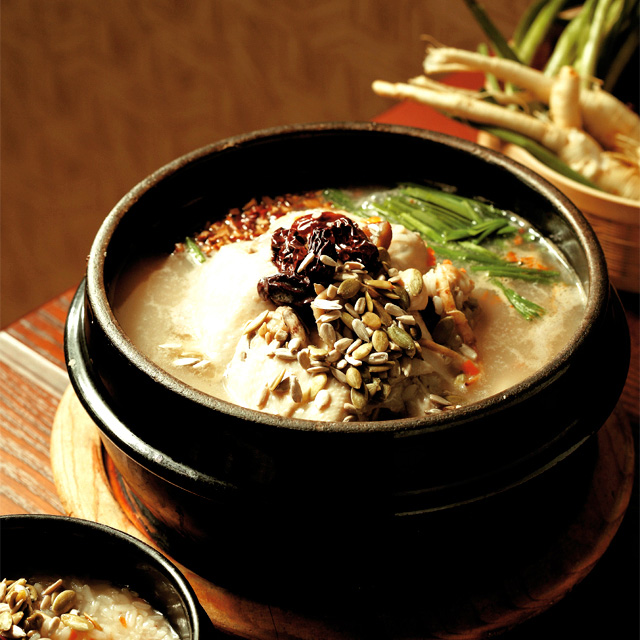 [Gyeonggi-do: Namhansanseong Dakjuk] Some thirty years ago, the Namhansanseong neighborhood, or the South Han Mountain Fortress neighborhood, was totally different from the way it is now. Houses were located close to each other in small little clusters. There were streams and forests in the neighborhood and it was easy to access food sources. People picked vegetables and herbs from the forest and cooked namulbap, an assortment of greens mixed with rice. They raised chickens and shared eggs with their neighbors. During the weekends, the region was crowded with visitors and hikers. In order to welcome the visitors, they began to provide simple daily meals. However, with a rise in the number of tourists, they came to think of a food item that could be served to a group of people. Dakjuk was born. Chickens that were grown on the steep mountainside developed strong muscles. These animals needed a longer boiling time than those raised in Seoul. Thus, namhansanseong dakjuk was made with chickens boiled for at least three to four hours and then served with chapssal juk, a type of glutinous rice porridge. It has long been popular and remains a favorite for hikers across the region.