The end of the year 2013 draws near. During this end-of-year season, people search for great spots from which to view the sunset or sunrise, where they can send out the old and ring in the new. Yeongjongdo Island in Incheon, which forms the bulk of the airport island, is one of the most popular locations from which to view both the sunrise and sunset, especially for Seoulites. For these revelers, the Incheon Airport Railroad Express (AREX) offers a special New Year train early in the morning on Wednesday, January 1. Two trains will depart Seoul Station at 6:01 a.m. and 6:10 a.m. and travel past the usual last stop at the Incheon International Airport to arrive at Yongyu Station, one more station beyond the airport and the end of the line. Six of the most popular travel destinations around Incheon Airport can be reached on foot from Yongyu Station, except Jeongseojin, near Geomam Station on the mainland, and Hanagae Beach, on an outlying island.Sunrise on January 1, 2014, will be at 7:47 a.m. JeongseojinJeongseojin, meaning, “being west of Seoul,” is a park located on the mainland at the mouth of the Gyeongin Ara Waterway, just before the final bridge to Incheon Airport. Located next to the Incheon Cargo Distribution Terminal and the beautiful Gyeongin Ara pedestrian footbridge, the plaza is one of the most popular spots for watching the sunset fall over Yeongjongdo Island and the smaller islands that surround it. The modern Noeuljong sculpture with its tourist-accessible bell is one of the most crowded spots in Jeongseojin, as well-wishers ring out the old year. On the last day of 2013, there will be a series of New Year celebrations held at Jeongseojin. A traditional percussion quartet, a variety show, some fireworks interplayed with music and finally the countdown to New Year’s will all take place at Jeongseojin, around the Noeuljong bell sculpture, from 4:30 p.m. until around 9:00 p.m. As with every year, there will be the annual live TV programs being filmed there, too. [How to get there]Exit Geomam Station along the airport line and catch Bus No. 77-1. It runs every 40 minutes. On December 31, a free shuttle bus will run every 20 minutes from Geomam Station to the Jeonseojin event venue from 3:00 p.m. until after midnight. The bell of the Noeuljong sculpture helps frame the sunset’s glow. The sunset falls behind Maerangdo Island, or “Shark Fin” Island, off of Geojampo.

Geojampo Geojampo is a tiny, peaceful port located near Yongyu Station, at the end of the airport line, that can only be reached by the Airport Rail Link or by driving. A cluster of uninhabited rocks with distinctive shapes stand above the water, including Maerangdo Island and Saryeomdo Island, creating a picturesque landscape. Maerangdo Island is also called Shark Island as it resembles a shark fin. Watching the New Year’s sunrise rise over Maerangdo Island would provide visitors with a wonderful New Year’s memory.

Eulwangni Beach is one of the most popular dating spots for couples.

Eulwangni BeachEulwangni Beach is one of the most popular beaches around the airport and Yeongjongdo Island and it can be very crowded all year round. A beautiful white sand beach unfolds for as long as 700 meters. At low tide, a solid sandy beach is exposed for as far as 200 meters into the water, rife with clamshells and pebbles. Frequented by a large number of travelers, the surrounding areas are well equipped with restaurants and accommodations. Behind the beach, between it and the airport, there is a huge pine forest with lots of bizarre rock formations making for a scenic hike. The beach provides visitors with a romantic seaside walk as they wait for both the sunset and the subsequent sunrise. 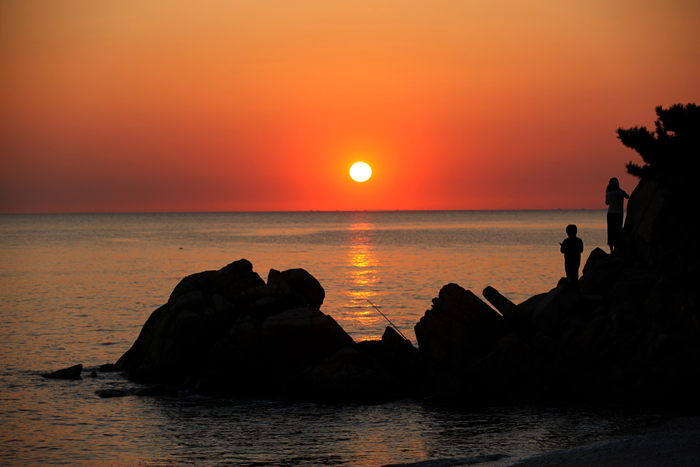 Seonnyeo Bawi Beach, the Celestial Maiden Rock BeachOn their left, on the way to Eulwangni Beach, visitors can observe a number of curious rock formations that rise up from the seabed. Among them is the Seonnyeo Bawi, or Celestial Maiden Rock. The rock reminds viewers of a famous myth: a group of seonnyeo, dryads or nymphs, came down from heaven riding on a rainbow to dance and be merry with those in the neighborhood. The sunset behind this rock creates a breathtaking view. Thanks to its beautiful scenery, highlighted with rocks on the seashore and boundless fine sand on the beach, it has become a prime filming spot for many dramas, including “Boys Over Flowers” (2009) and “King of Ambition” (2013). Masian BeachAt Masian Beach, visitors can see both mudflats and sand beaches. Travelers can see a clear distinction between the black mud and the sandy, ivory-colored beach. Surrounded by pine trees, the beach gives off an exotic atmosphere. It was here that the movie “Silmido” (2003) was filmed. Masian Beach is adjacent to Geojampo, at the end of the airport line, and allows people to kill two birds with one stone. Some people choose to visit Masian Beach for the sunset and then hit the adjacent Geojampo for the sunrise. 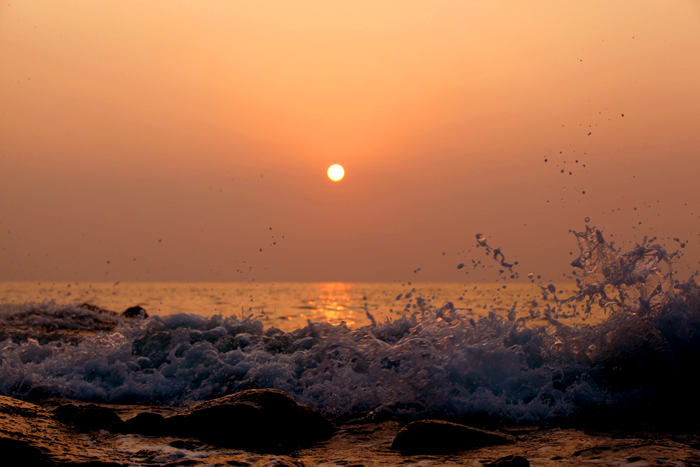 The sun sets over Hanagae Beach.

Hanagae Beach in Muuido IslandHanagae Beach became popular when it was featured in the drama “Stairway to Heaven” (1991), featuring the two main stars actor Kwon Sang-woo and actress Choi Ji-woo. Hanagae Beach is on Muuido Island, and you have to take a short boat trip from the Jamjindo Wharf, next to Geojampo, to get there. For travelers who want to welcome in the first day of 2014 on the island, the Jimjindo Warf will operate boats to Muuido Island starting at 6:30 a.m. The five-minute journey on the boat will carry you to the island. Muuido Island is especially popular with youth groups. It offers a variety of entertaining programs. You can enjoy riding a horse on the beach, rent a quad to go around the island or enjoy a zip-line at the Sea Sky World center. [How to get there]Exit the Incheon International Airport station from exit No. 7 on the third floor of the station. Take bus No. 222 or No. 2-1 and get off at the last stop, Jamjindo Wharf. Take a boat from there for Muuido Island. (All photos courtesy of Incheon Airport Railroad Express ) Click here for more Korea.net news about the Airport Railway Line. By Lee Seung-ahKorea.net Staff Writer