In the second part of our series “Food Tourism,” which highlights local delicacies and the culinary history and culture of Korea’s eight provinces, Korea.net introduces three dishes originating from Gangwon-do (Gangwon Province). Located along the eastern coast of the peninsula, Gangwon-do is surrounded by the East Sea on the east, Gyeonggi-do (Gyeonggi Province) on the west, parts of Chungcheongbuk-do (North Chungcheong Province) and Gyeongsangbuk-do (North Gyeongsang Province) on the south and North Korea on the north. It has a temperate climate: it is hot and humid in the summer and cold and dry in the winter, due to the effect of the continental anticyclone. 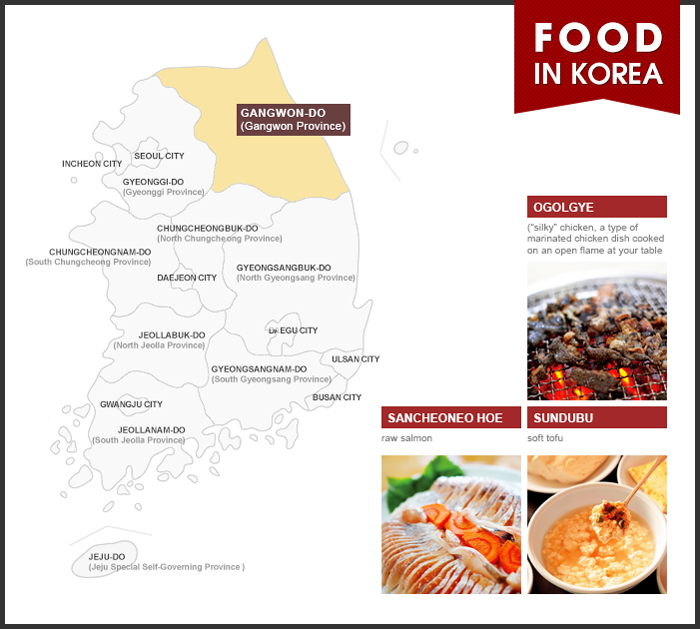 Gangwon-do is large, at 20,569 square kilometers. Around 81 percent of the province is covered by mountainous forest, and farmland takes up some 10 percent. With the huge Taebaeksan Mountain range running through its center, Gangwon-do is roughly divided into two regions: Yeongdong in the east and Yeongseo in the west. The Yeongdong region has a beautiful landscape with large mountains, the sea, valleys and gogae, mountain passes, all meeting in great harmony. There are several mountain passes in the region including Daegwalleong, Misiryeong, Jinburyeong and Hangyeryeong. Meanwhile, the basins and surrounding mountains in the Yeongseo region have relatively gentle slopes. The climate is different depending on where you are. The Yeongdong region along the sea is always about two degrees Celsius warmer than the Yeongseo region. Such an environment, surrounded by mountains and seas, helped create the regional delicacies here. Today, Korea.net introduces three Gangwon-do foods recommended by the Korea Tourism Organization to eat during the winter: raw cherry salmon, Silkie chicken and soft tofu. 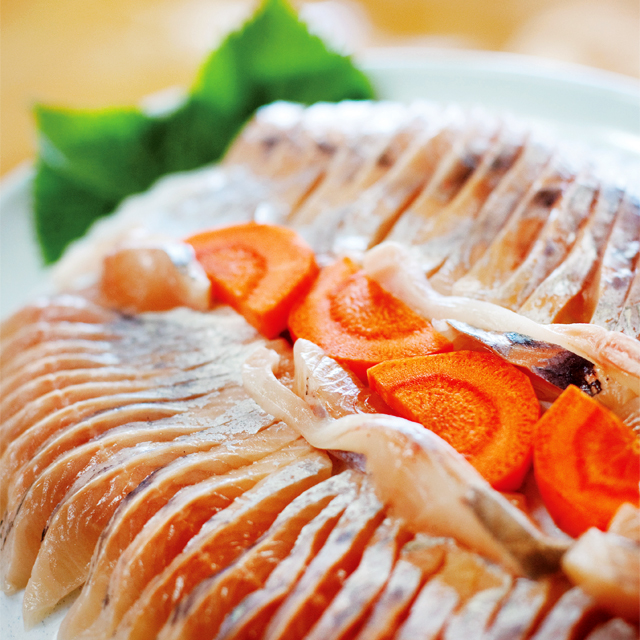 Every winter since the early 2000s, Hwacheon-gun (Hwacheon District) in Gangwon-do (Gangwon Province) has been attracting a great many visitors to its big winter event: the Hwacheon Sancheoneo Ice Festival. The fresh, clear freezing water of the area’s streams are home to plenty of sancheoneo, a species of salmon (Oncorhynchus masou), that returns to the streams yearly during hatching season. The fish are known for their chilly existence, as the water never exceeds 20 degrees Celsius, even in the summer. Hwacheon-gun is famous across the nation for having the thickest ice formations during the winter and thus it provides favorable living conditions for the sancheoneo.

Sancheoneo are migratory fish that swim downstream to the ocean and return upstream to fresh water to reproduce. However, unlike other species of salmon, sancheoneo put a priority on security rather than food, meaning that they do not necessarily migrate all the way to the ocean once they find a secure place to live. Sancheoneo are known to give birth to their eggs between October and November in the frozen waters of Gangwon-do’s rivers and valleys. We can taste the in-season fish between December and February. The salmon raised in Hwacheon are very fresh and have a slightly chewy texture. They are good for one’s health, too. They contain elements of amino acids, fatty acids and Vitamins C and E that help you recover from fatigue. 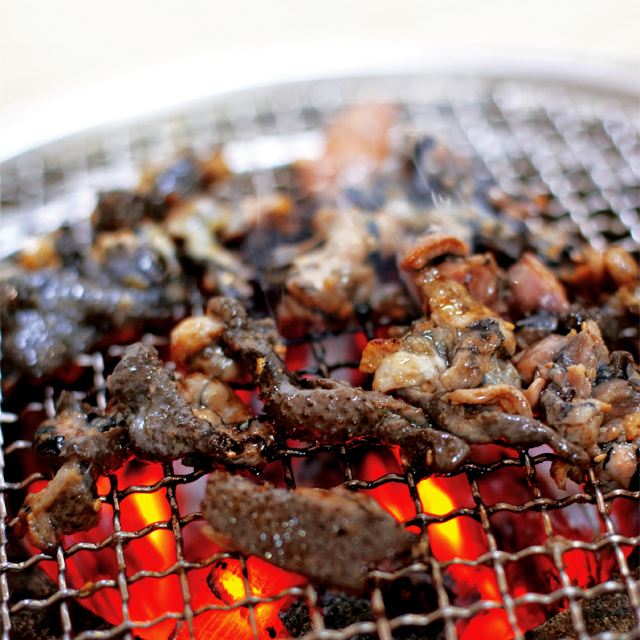 Ogolgye, or Silkie chicken, a breed of poultry with fluffy feathers and black skin, is well known as being a health food. Charcoal-grilled ogolgye came into being some 20 years ago when a lot of restaurants started grilling marinated Silkie chicken over charcoals. An old woman from Yanggu-gun (Yanggu District) once cooked up some ogolgye on a charcoal flame just out of curiosity. The taste was wonderful. The meat wasn’t very tough and was a little chewier than standard chicken breeds. The Silkie chickens raised in Yanggu-gun are fed with fresh and clean wild plants. The meat is a bit more tender and has less of a fishy taste. In addition, ogolgye soup boiled with the bones is delicious, too. 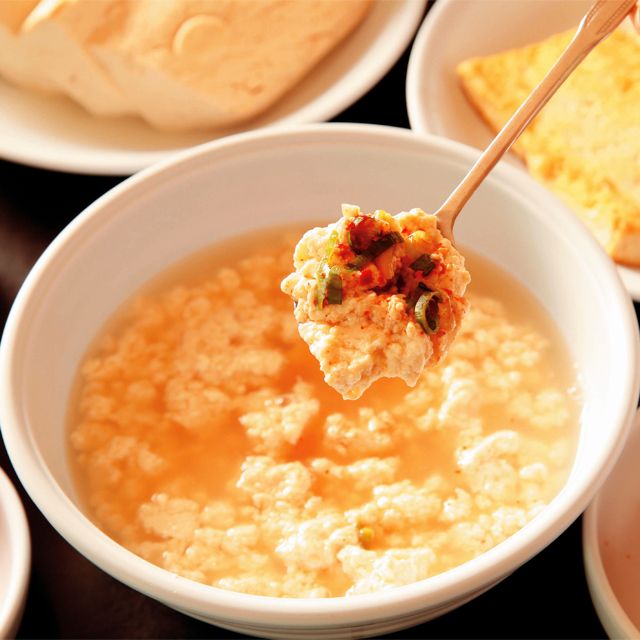 Chodang Sundubu, one of the popular Gangwon-do delicacies, dates back to the Joseon Dynasty (1392-1910). Author Heo Gyun, who wrote Korea’s first novel, the “Honggildongjeon,” “The Tales of Hong Gil-dong,” happened to live in Gangneung, Gangwon-do where his father, Heo Yeop, had taken up his new post. Heo Yeop often drank the water from the nearby wells because the taste was so good. He decided to make some tofu, one of his favorite dishes, using the nearby well water. He kept the soy beans soaked in this water for the allotted amount of time, ground them with a millstone and then filtered the resulting curd through a closely-woven cloth. Bean-boiled water normally requires the addition of salt but there is no salt available in the region. So he fetched some water from the East Sea to give some salty taste to the tofu. This resulted in a much more tasty dish. Thus, the light and savory taste of Gangwon-do tofu was born. As it became more and more popular, people began to refer to it as “Chodang” Tofu, naming it after Heo Yeop’s pen name, Chodang.