The second novel in the ten-volume series is “One Spoon on This Earth” by author Hyun Ki-young. This is a coming-of-age novel during which the writer traces back to the childhood he spent in his hometown on Jeju Island. The story is about experiences he underwent on the island as he developed both physically and mentally, from the severe poverty of the time to milestone events in Korean history, such as the Jeju Uprising, a peasant revolt against the central government in April 1948, and the Korean War (1950-53). 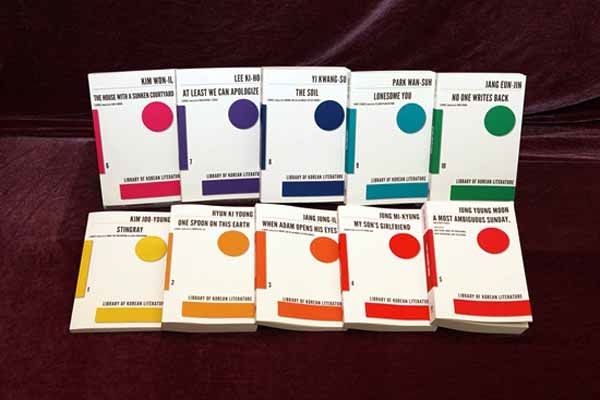 The Library of Korean Literature series is a collection of ten Korean novels published in English last October in the U.S. (Photo courtesy of the Literature Translation Institute of Korea)

Throughout the novel, Hyun reminisces about his teen-aged years as he got entangled in such adolescent emotions as loneliness, shame and curiosity about girls, all part of growing up. The story starts with the author, now in his 50s, facing the loss of his father. Cleaning his father’s cold, stiff body brings him back to his birth. From that point, the writer starts recalling memories of his childhood back in the 1940s. He remembers the pig’s nose that his mother always hung around his neck like a pendant because he drooled too much. Unlike other animals, pigs don’t drool, so his mother forced him to wear it as an amulet. The novel also depicts the rebellious boy he turned into due to the absence of his father. His father hardly ever came home, as he was serving with the national defense guards. The story details his puberty during which he became oblivious to the stunningly beautiful nature surrounding him, and during which he moved farther and farther away from nature and grew attracted to city life, urban people and modernity. Throughout his book, Hyun, who was born on Jeju Island in 1941, loosely relates all his experiences as he grew up on the island, and tries to show “the historical existence of a human being.” This novel has long been considered one of the greatest coming-of-age novels in Korean literature. Hyun Ki-young’s “One Spoon on This Earth” is published in English in the U.S. (image of the original cover)

The author explained his work as follows: “‘One Spoon on This Earth’ talks about a teenager growing up and it mainly tells about the ’events’ of the time, rather than any ‘ideology.’ I would say this is a sort of journey to find the ‘water vein’ that runs deep inside me, I mean, the memories of my childhood deep inside me.” The experiences that helped his literary talent bloom are all described in this book, Hyun said. “The nature of Jeju Island and the days I spent there all played a crucial role in transforming me into a writer. The friends I met and the books I read there have made me into who I am now.” In addition, the absence of his father turned him into a cocky and insubordinate child and later influenced his literature at the same time, he said. One might wonder why the title is “One Spoon on This Earth.” In the middle of the story comes the description of the final moments of Yi Tokku, the head of one of the central government’s mountain raiding parties early during the Jeju Uprising.

He had his arms stretched out and his head drooped to the side. From one side of his mouth and one of his ears, dripping blood had coagulated. His face looked peaceful as if he were sleeping. The executioner had stuck a spoon in the jacket pocket to mock the dead man, but no one laughed…

The ill-fated leader left behind just “one spoon,” just like that. Everyone arrives on the earth with “one spoon” given to them by the gods and they die leaving behind the spoon. With this, the writer intends to let the readers know, “how long and how short life for ’one spoon on this earth’ can be and how vain belief can be, as well.” This great novel is translated into English by Jennifer M. Lee, a former lecturer at Kyung Hee University. The American-born translator has worked on other well-known Korean literary pieces including “Your Paradise” and “The Wounded,” both by Yi Chong-jun.