The entire nation has been plunged into the midst of summer, with daytime temperatures in Seoul on June 10 reaching 34.9 degrees Celsius.

Due to this earlier-than-expected heat wave, beaches across the country are preparing for an early opening this season.

According to the Ministry of Oceans and Fisheries, most of the 279 beaches in Korea, except for some which opened earlier in June, will begin officially opening for the summer between June 29 and July 20.

During their opening, beaches will attract holidaymakers with various festivals, unique events and all types of water activities. 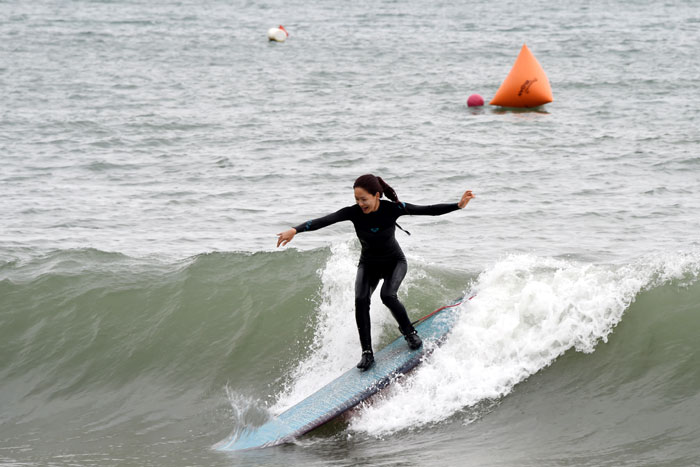 A participant in the International Surfing Contest enjoys surfing at Haeundae Beach in Busan on June 28.

On June 28, about 50,000 people headed to Haeundae Beach in Busan, which opened on June 1. The seventh Busan Mayor’s Cup International Surfing Championship took place that day, with some 360 athletes from six countries in attendance, including surfers from Korea, Japan and the U.S. Haeundae plans to host various festivals during the summer, such as the IYF Haeundae Music Festival scheduled from July 4 and 5, a celebration to mark the beach’s 50th anniversary slated on July 18 and 19, and the final match of the League of Legends (LoL) Championship Game, a gaming competition scheduled for August 9.

Among beaches along the West Coast, Daecheon Beach in Boryeong was the first to open on June 20. This beach is busy preparing to host the world-famous Boryeong Mud Festival. This festival has won international popularity and has become a must-see attraction for international tourists. This year’s mud festival will be held from July 17 to 26 at three main areas: Daecheon Beach Mud Plaza, Fountain Square and Citizens’ Tower Square.

The Muchangpo Beach in Boryeong will host its annual sea-parting festival from August 14 to 16. This beach is famous for its wide tidal range all year around, especially during the Mysterious Sea Parting Festival, where a 1.5-kilometer spit of sand opens for a short period of time, connecting Muchangpo Beach and Seokdaedo Island. 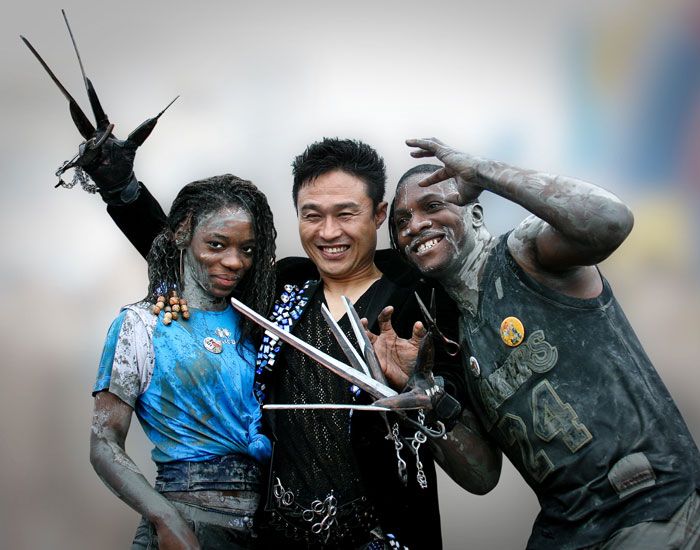 Visitors have fun at the Boryeong Mud Festival. This year’s funfest is scheduled for July 17 to 26. 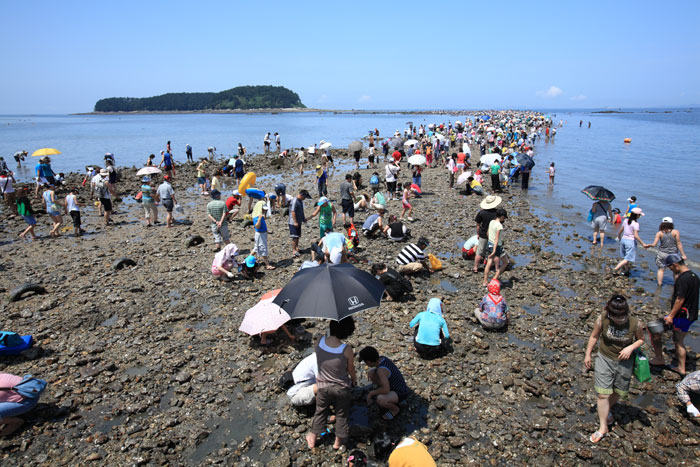 Beach-goers walk along the uncovered spit and collect seashells.

Most beaches in Gangwon-do Province will open around July 10. Deungdae Beach in Sokcho will host a squid festival, where people can catch squids with their bare hands between July 25 and August 1. Other noticeable events at Gangwon beaches include the International Junior Art Festival, which will be held at Gyeongpo Beach in July, and the Korea Music Festival, scheduled from August 7 to 10. 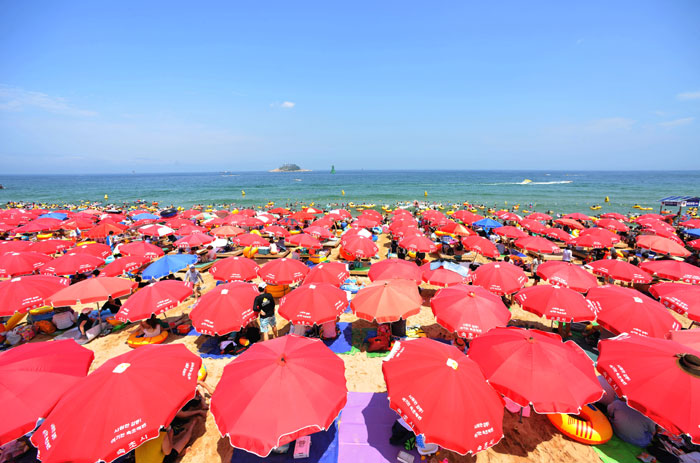 If you love summer sports, Jinha Beach in Ulju-gun County, Ulsan, and Goraebul Beach would be a good choice, as the Beach Volleyball Korea Tour will be held from July 22 to 25 at Jinha Beach. Goraebul Beach will host the Beach Marathon on July 12 and the Beach Soccer Championship on August 8 and 9. 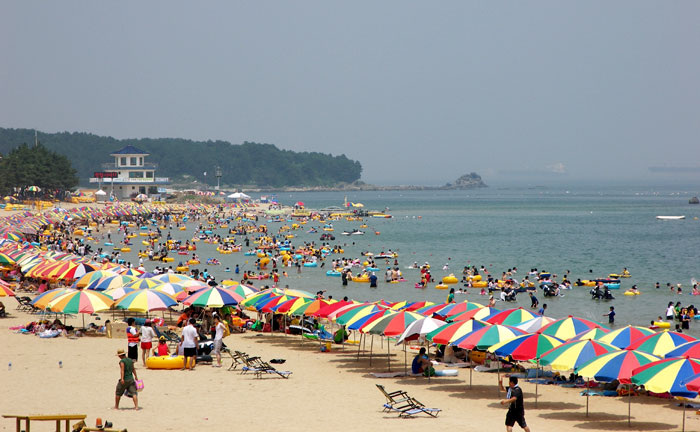 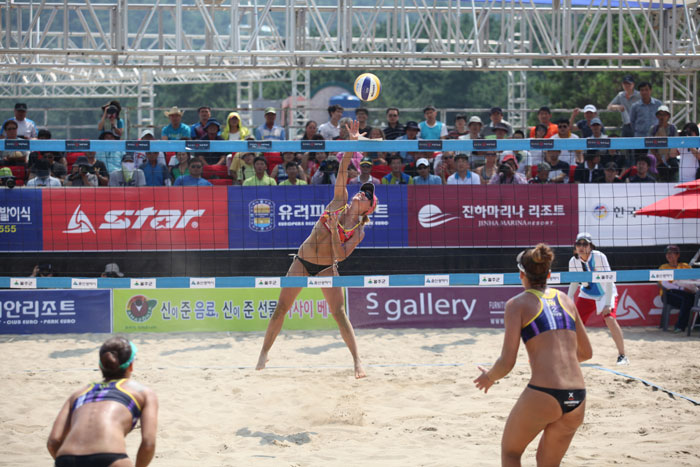 Jinha Beach will host the Beach Volleyball Korea Tour from July 22 to 25 this summer.

If heading to the South Coast, the Sangju Silver Sand Beach in Namhae-gun County would be a good destination. More than 300,000 people visit this beach every year. The silver strip of sand, with crystal clear waters and a 2-kilometer half-moon sandy crescent form a wonderful view. This beach hosts its annual Sangju Summer Festival composed of concerts and a singing contest. This year’s festival will be held on August 1 and 2. 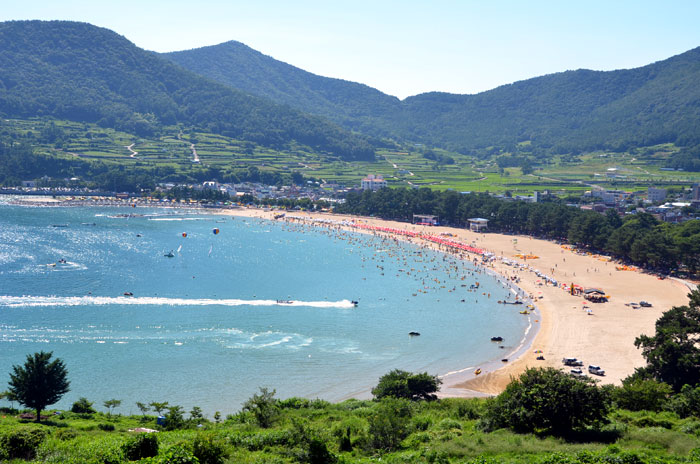