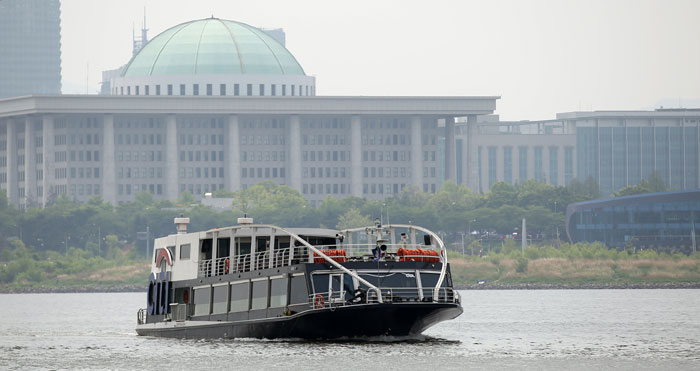 A river cruise allows people to appreciate the beauty of the Hangang River and of Seoul, and to look around historical sites found along the river.

Yanghwajin is a neighborhood in the Hapjeong-dong area of Mapo-gu District in modern day Seoul, at the north end of the Yanghwa Bridge. It used to be an important transportation point because it was this river port that connected the main road from Hanyang, today’s Seoul, with other areas of the country.
Yanghwajin was also one of the main agricultural storage and redistribution points handling foodstuffs from the three southern provincial areas of Chungcheong, Jeolla and Gyeongsang.

The neighborhood of Yanghwajin also used to be known for its scenic beauty, a point from which port visitors and sightseers could enjoy a river cruise. The Joseon history text “Hangyeongjiryak” (한경지략 in Korean or 漢京識略 in Chinese) says that, “Yanghwajin has a picturesque view, where envoys from the Ming Dynasty go every day to enjoy nature and to write poems.”

A small hill just east of the traditional port — today, just east of the northern end of the Yanghwa Bridge — is named Jamdubong Peak (잠두봉, 蠶頭峰), as it is said to have looked like a silk worm raising its head. The hilltop was later better known as the Jeoldusan Martyrs’ Shrine due to the massive number of Catholics executed here in 1866. A special cemetery for foreign missionaries was built near the old river terminal, as well.

This year, the Mapo District Office will be running a special neighborhood tour involving a ferry trip and some history lessons every Saturday from April to the end of October. The tour includes sightseeing around Bamseom Island and Seonyudo Park, as well as some nearby historic sites.

The tour is run in two parts. In the first part, participants can look around the Yanghwajin Foreign Missionary Cemetery and then catch a ferry at the Jamdubong Pier to look around Bamseom Island, the Danginri power plant and Seonyudo Park. The second part includes a visit to the Jeoldusan Martyrs’ Shrine instead of the Yanghwajin Foreign Missionary Cemetery, and then a trip on the ferry. 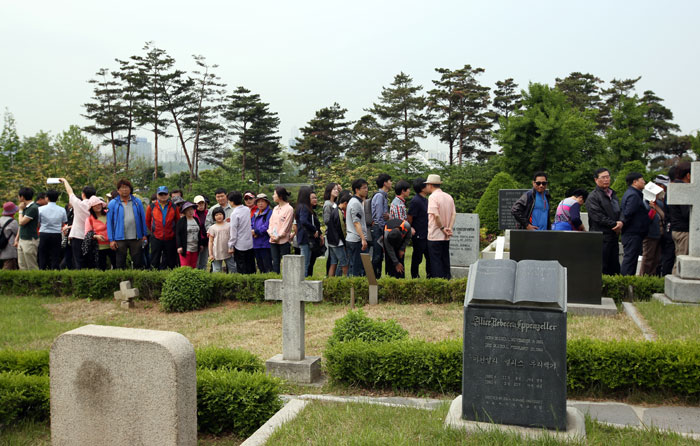 About 120 people took part in the tour on May 9. The people varied, ranging from elementary school students to the elderly and international students. They visited the cemetery and then boarded the ferry to enjoy the cool breeze coming off the river while enjoying the historical sites along the riverside. 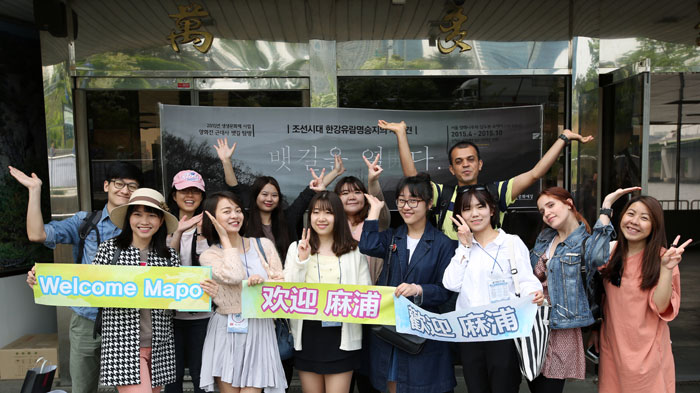 The supporters of Mapo District are made up of foreign residents and international students. They pose for a photo before boarding the ferry on May 9. 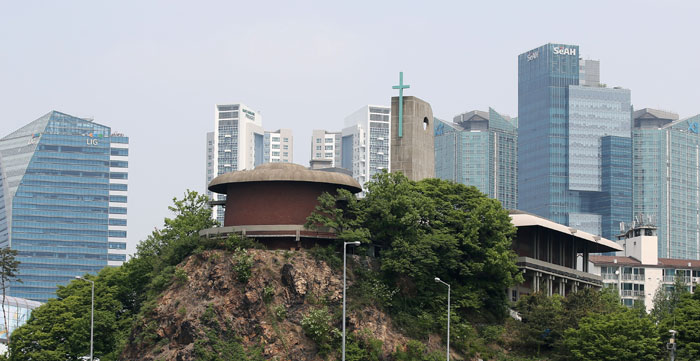 The Jeoldusan Martyrs’ Shrine can be seen from the ferry. 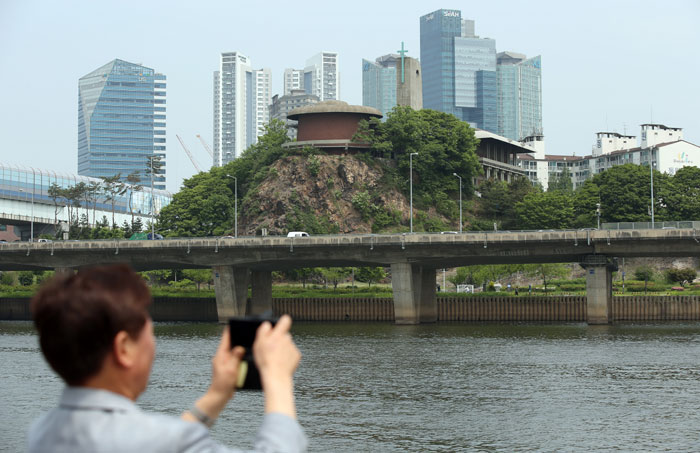 The Jeoldusan Martyrs’ Shrine is in today’s Mapo District in Seoul. 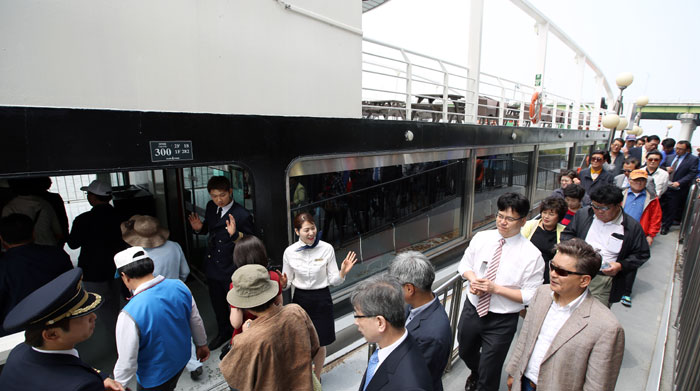 Tour-goers board the ferry at the Jamdubong Pier.

The Yanghwajin ferry tour allows people to enjoy the beauty of the Hangang River while onboard the ferry.

Mayor of Mapo-gu District Park Hong-seop said, “During the 500 years of Joseon, many riverside villas were located in the area stretching from Gwangjin-gu District to the Yanghwa Bridge. About 22 of them were along the Mapo riverside. One of them is the Mangwonjeong Pavilion. This proves how beautiful and clean Mapo was.” He added that, “The Hangang River Restoration Project, run by both the national and Seoul city governments, can offer opportunities to more citizens to realize the preciousness, the beauty and the cleanliness of the Hangang River.” 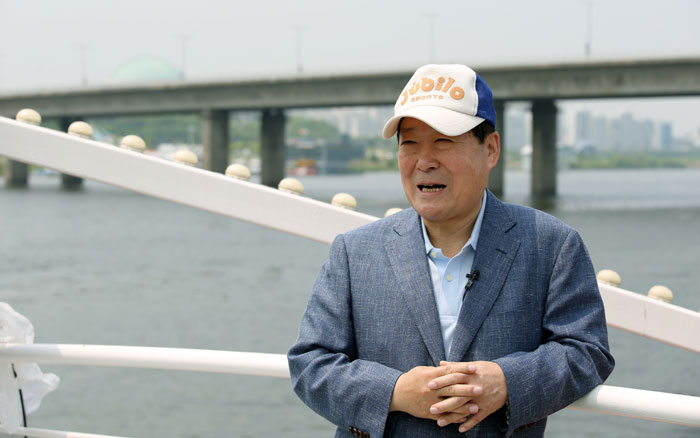 Mayor of Mapo-gu District Park Hong-seop hopes that the river restoration project can allow more people to enjoy the beauty of the Hangang River and of Seoul. 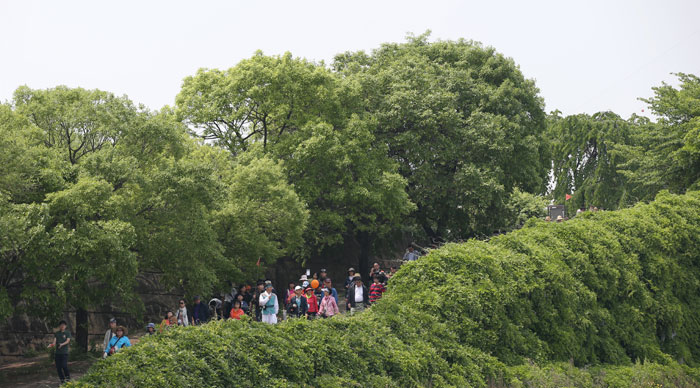 Participants in the Yanghwajin ferry tour arrive at Seonyudo Park by ferry.

The tour will run a total of 24 times this year, on every Saturday from April to October, except during the rainy season in the summer. Tours are held twice per day, at 10 a.m. and 3 p.m. To participate in the tour, please call the Culture and Road Research Institute of Cultural Heritage at 02)-719-1495. Participants must be over 10 years of age or be higher than grade four in school. The tours are free. Up to 40 people can join each tour.

The scenic Hangang River can be enjoyed from the ferry during Mapo District’s Yanghwajin ferry tour.