Located in mid-western Jeollanam-do (South Jeolla Province), Naju has long been regarded as a city of abundance, ever since time immemorial. The Yeongsangang River, one of Korea’s four largest rivers that form the nation’s lifeblood, flows through the center of the city. Surrounding it, fertile plains spread all around, forming the breadbasket of the country. Known for plentiful amounts of sunlight, water and fertile fields, the city produces the most delicious rice in the nation. In addition, it has now begun producing the Naju pear, the city’s representative fruit. The Naju pear was supposedly offered to the king during Joseon times. Currently, the region is home to approximately 92,000 people as of March 2015. The city spans across 608 square kilometers. 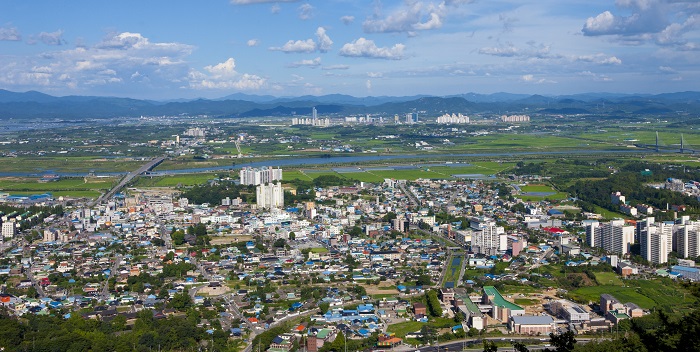 Naju has developed into a wealthy region thanks to plentiful sunlight and the Yeongsangang River which flows through the city.

There are a number of historical sites across the city. Pictured is the Naju Geumseonggwan, used as a royal chamber during Goryeo and Joseon times. On the first and fifteenth of each month, a ‘saluting ceremony,’ the Manggweollyeh, used to take place here.

The Yeongsangang River is very important to the city in terms of its establishment and development. Without mentioning the river, the history of Naju cannot be fully explained. The city first rose to prominence early in Korea’s Later Three Kingdoms Period (892-936) when Gung Ye (c. 869-918), Gyeon Hwon (867-936) and Wang Geon (877-943) were vying for the throne. Wang Geon, who became King Taejo of Goryeo (r. 918-943), managed to enter the city along the Yeongsangang River, accompanied by his naval forces, and succeeded in joining forces with the local wealthier clans, laying the groundwork for political and economic development. Since then, Naju has always been the critical region in South Jeolla Province. 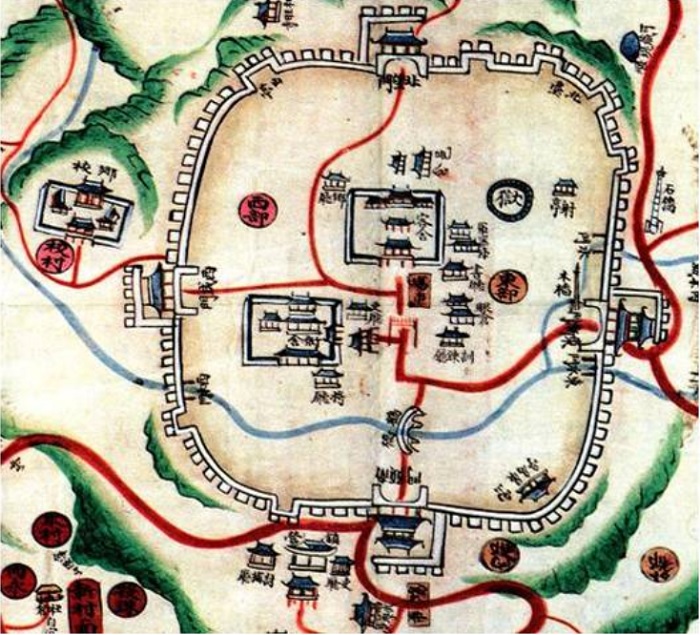 A map of Naju-eup Fortress is known to have been painted in 1872. Since the city’s layout was roughly on par with that of Hanyang, today’s Seoul, it was called, ‘Little Seoul.’ 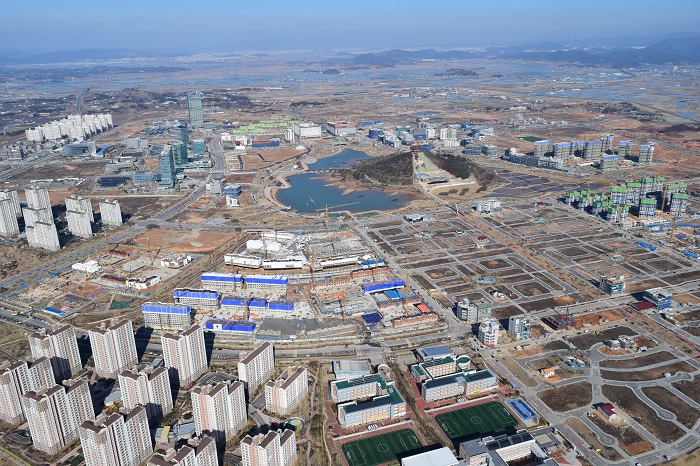 Naju also lay upon an important trade route, being home to the Yeongsanchang, the government office that collected and stored rice from across South Jeolla Province. These days, there are several boats operating at Yeongsanpo Port, giving visitors the chance to sail up and down the Yeongsangang River.

Near the port is the Yeongsangyo Bridge and “Hongeo Street,” home to many restaurants that serve fermented skate. Unlike other seafood dishes, in this dish fresh skate is fermented with rice straw in a jar for about two weeks before serving. Many people can’t stand the pungent smell, but a trip to Naju cannot be complete without tasting it.

The “Taengniji,” a Joseon geography book written during the 18th century by Lee Jung-hwan, says that in Naju, “There is the Geumseongsan Mountain to the back and the Yeongsangang River flows in the south. The geography resembles that of Hanyang,” today’s Seoul. During those times when many people believed in feng shui, it was considered good fortune to have a similar geography to that of Seoul. As with ancient Seoul, Naju housed the Naju-eup Fortress that was surrounded by four main gates, palaces, government offices and Confucian schools, or hyanggyo. Thus, the region was called, “Little Hanyang,” or, “Sogyeong,” becoming the center of the Honam plains for over 600 years. 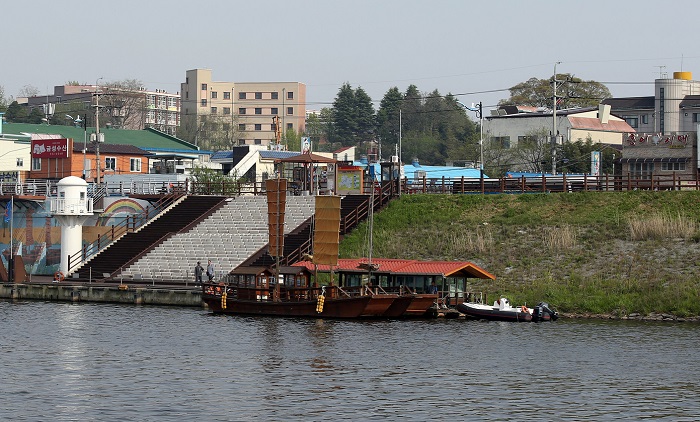 Boats at the pier near Yeongsangang Port wait for tourists. 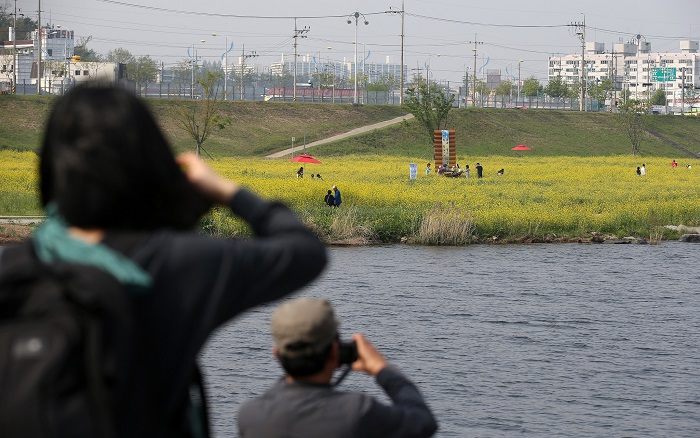 Tourists onboard a river cruise take pictures of canola flowers across the river. 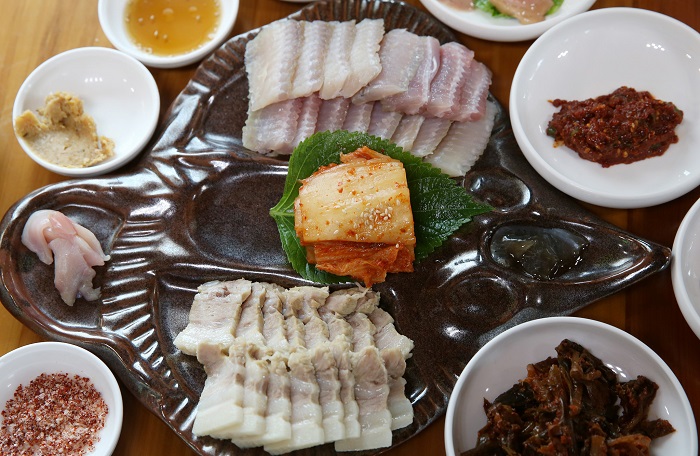 Fermented Skate (hongeo) is a representative dish of Naju City. It’s recommended to eat it with boiled pork and fermented kimchi.

Naju City began operating city tour buses on April 26 to give tourists better access to the region’s history and amenities. Running once per day on Saturday, through to September 12, the bus stops at Naju Station, Naju-eup Fortress, the Hwangpo pier, the Natural Dyeing Cultural Center, the Bannam burial mounds and the Naju National Museum. Reservations can be made at many reservation sites, such as Geumho (www.kumhoaround.com), Hana Tour (www.hanatour.com), Web Tour (www.webtour.com) and Nextour (www.nextour.com).

Beyond the locations visited by the bus, there are many other places to visit in Naju. Tourists can visit the Wansacheon Stream, one of the locations in the love story between King Taejo and Empress Janghwa. There is the Naju Hyanggyo, a local center for Confucian tradition. The Naju Image Theme Park was the filming location for the soap opera “Jumong,” and the Dorae Hanok Village built during the 1930s is also a popular tourist destination. 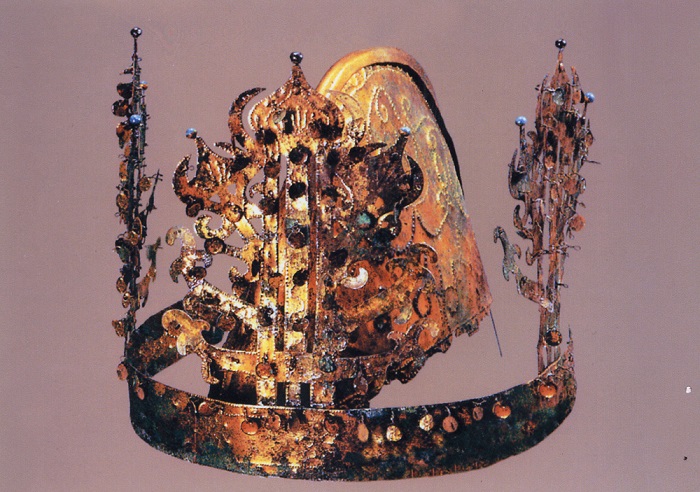 A gilt-bronze crown was excavated from the Bannam burial mounds in Sinchon-ri in Naju City. 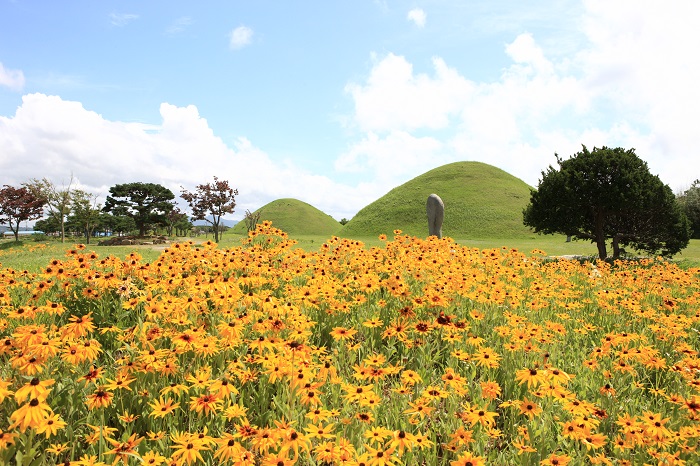 A total of four burial mounds were discovered in Bogam-ri in 1996. Today, they’re collectively known as the Bogamri Tumuli. Among the excavated relics are gilt bronze shoes, silver ornaments and swords with ring-shaped pommels. 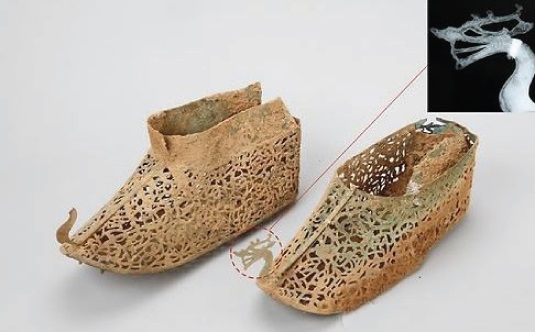 Gilt-bronze shoes are one of the most valuable relics excavated from the Jeongchon Tomb, part of the Bogamri Tumuli.