Located inland in southwestern Jeollanam-do (South Jeolla Province), Gangjin-gun County has an appeal as a coastal city, thanks to Gangjinman Bay that penetrates sharply inland. To the north, it borders with Yeongam-gun County by Wolchulsan Mountain, creating a wonderful skyline with its oddly shaped rocks and stones. In most of the southern parts lie fertile plains formed by the Tamjingang River flowing in from Jangheung-gun County in the east.Gangjin was formed during the 15th century by combining the two jurisdictions of Dogang-hyeon, part of today’s Yeongam County, and Tamjin-hyeon, part of Jangheung County. The name Gangjin literally translates to “convenient ferry port.” The county stretches across 500.96 square kilometers and is home to 40,079 citizens as of 2014. 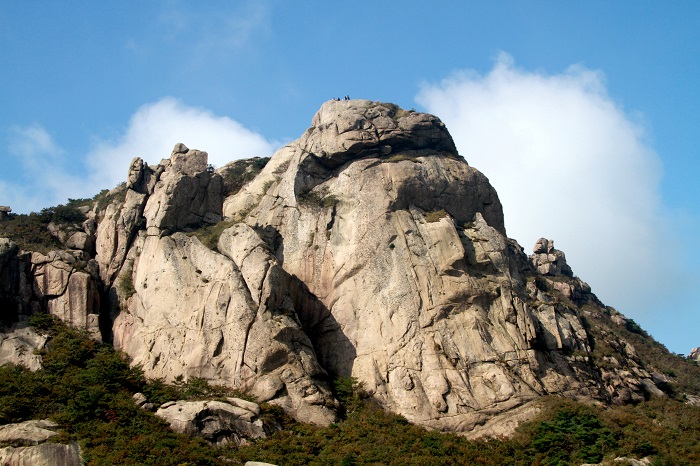 Located in the northern parts of Gangjin, Wolchulsan Mountain is known for its outstanding rocky landscape and vistas. 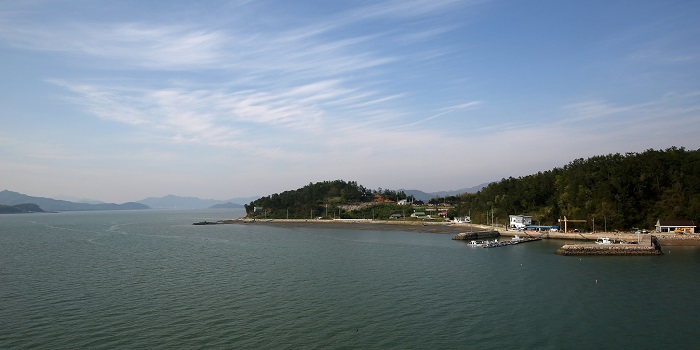 Both agriculture and fisheries are well developed thanks to Gangjinman Bay.

The county is formed along an inverse V-shaped topography, in the middle of which flows Gangjinman Bay. Agriculture has developed on the reclaimed farmland along the coastline. Thanks to Gangjincheon Stream and Tamjingang River, the region is lively with fisheries too, especially with baby clams, cockles, gobies and pike eels.

Gangjin has historically benefited greatly from its geography. The waterway opened up the opportunity to begin trade from the early Three Kingdoms period with merchants in neighboring nations including the Silla Kingdom, China, Japan and even Arabia. They exchanged ideas, arts, philosophy and more through this trade route. Among the many exchanged items was the Goryeo celadon created in the region. The county has favorable conditions for production and distribution of ceramics and pottery. First of all, it has abundant underground resources including kaolin and silica stones, key materials for baking ceramics. It was both easy to collect firewood from mountains to the north and transport the artworks along waterways in the south. 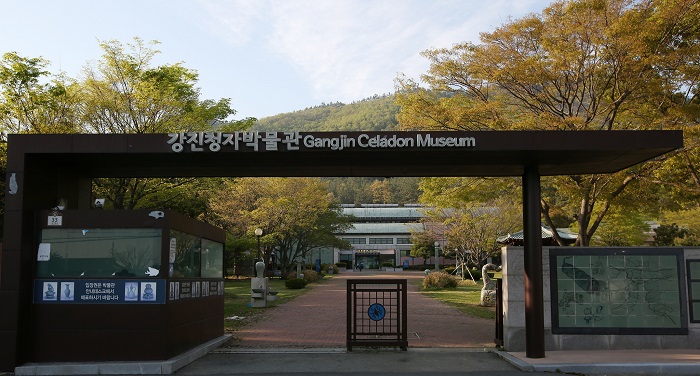 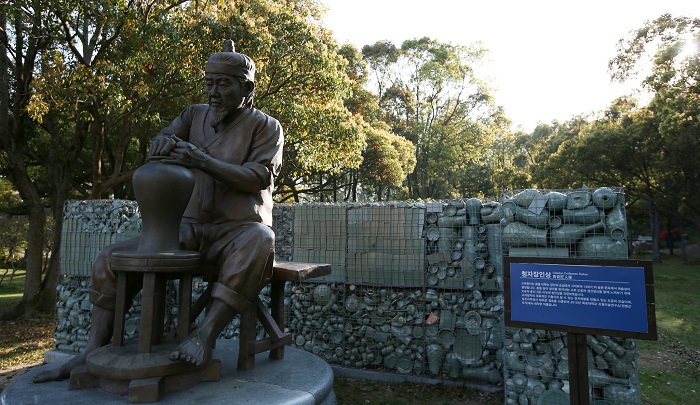 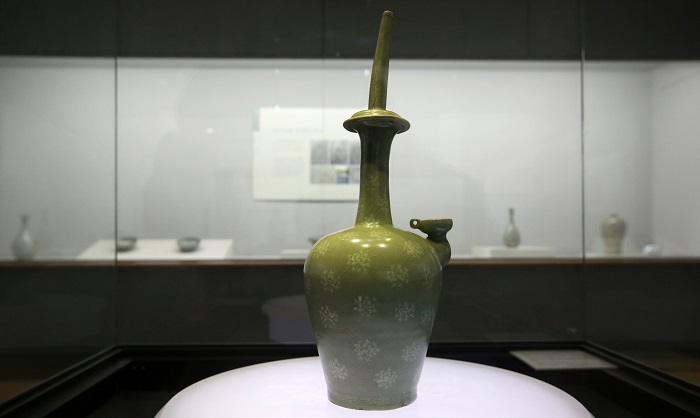 Gangjin Celadon Museum displays a wide variety of celadon wares from the 9th through to the 15th centuries. Pictured is Celadon Kundika with Inlaid Peony Design produced during the 13th century.

Developed in the late Goryeo period, the celadon, particularly with inlaid patterns, came to represent the Goryeo Dynasty. It required a special technique of scraping out patterns in clay pottery, filling up the empty part with kaolin and white clay, baking the pottery and finally applying lacquer over it. The ceramic artists in the region were known for their outstanding techniques for creating clear patterns that look painted. There are around 180 kiln sites in the county, nearly half of the total kiln sites across the nation. Gangjin Celadon Museum in Sadang-ri has on display diverse types of celadon wares that date from the 9th to 14th centuries.

Gangjin continued as the center of commercial activities during the Joseon times, too. With the establishment of Jeolla Byeongyeongseong Fortress during the 15th century, a military stronghold that controlled the Jeolla and Jeju regions, demand for commodities spiked up. Naturally, the number of merchants in the county grew and brought life to the domestic markets. There is a saying among locals, “Kaesong merchants in the north and Byeongyeong merchants in the south.” It suggests that the local merchants had great sailing and marketing skills, deserve to represent the southern part of the peninsula.

In order to revive the glory, Korail plans to introduce a special “market train” on May 30. Tourists can get a chance to explore the outdoor traditional markets and take part in a variety of tourism programs. (Details can be found at the Korail website: https://www.letskorail.com) 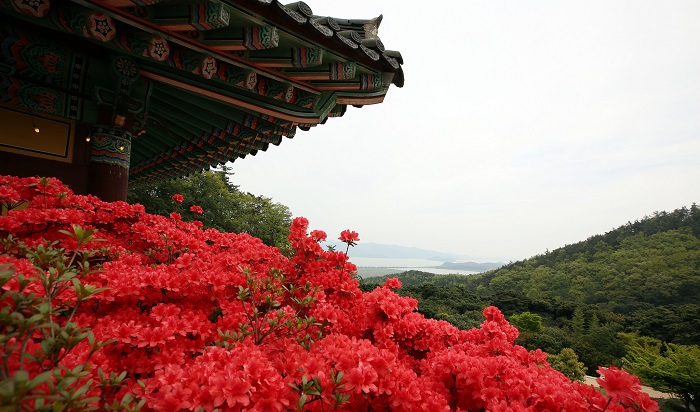 Gangjin County can best be explored in spring when it is covered with flowers. Pictured is a view of Gangjinman Bay as seen from Baekryunsa Temple on Mandeoksan Mountain.

Gangjin also has a number of historic and cultural travel attractions, too. One of the most famous sites is Dasan Chodang where Joseon scholar Jeong Yak-yong lived during his exile. Also known by his penname Dasan, Jeong is a famous figure in Korea known for his dedication to the development of practical learning. The region also has many more tourist destinations including Baekryunsa Temple carpeted with red camellia flowers during springtime, the house of poet Yeongnang Kim Yun-sik, known for his lyrical poem “Until Peonies Bloom” and Muwisa Temple nestled in the slopes of Wolchulsan Mountain. 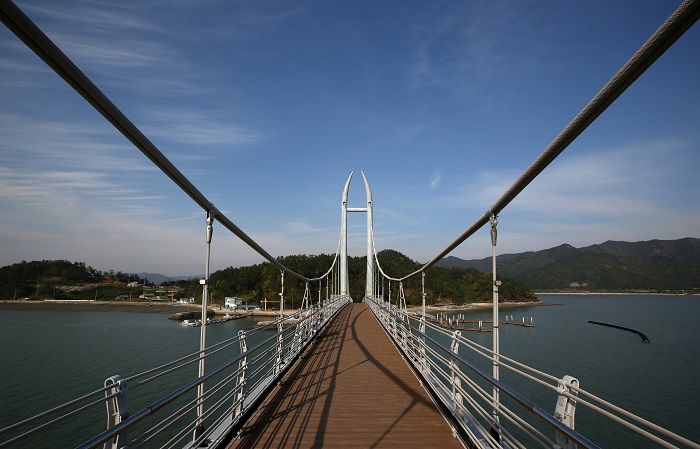 Chulleong Dari, or “shaky bridge,” connects Gaudo Island with the mainland. It can only be crossed on foot, not by motor vehicle. 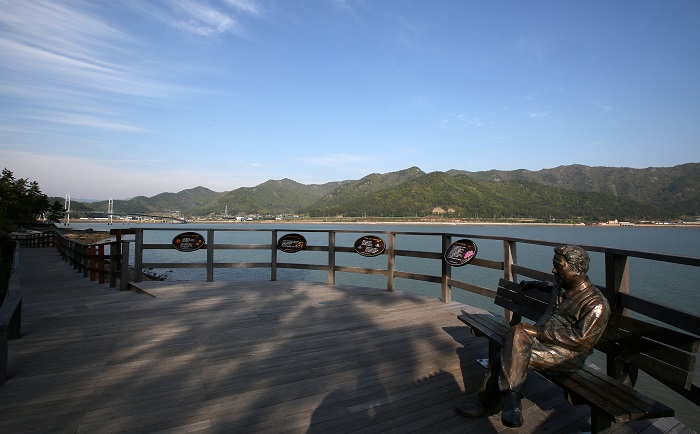 The trail in Gaudo Island allows visitors to enjoy nature, far away from urban noises and pollution.

Recently, Gaudo Island located in the middle of Gangjinman Bay has come under the spotlight, too. Among eight small islands along the 80-kilometer bay is Gaudo Island, the only inhabited island being home to 14 households. Previously, it was long regarded a mysterious site only visited by a few.

These days, however, the walking trail that stretches 2.4 kilometers around the island has gone viral among tourists, and it was selected as one of the most sought-after destinations among more than 2,000 islands in the southern provinces. Currently, plans are well underway to establish celadon-shaped observatory in the center of the bridge and a zip line at a height of about 800 meters.

Transportation to Gangjin County
You can take the KTX train from Yongsan Station in Seoul and arrive at Naju Station, the nearest station to Gangjin. Or, if you take an intercity bus, you can get off at Gangjin Intercity Bus Terminal.