Seoul, the capital of Korea, has been included in the New York Times’ (NYT) list of 52 must-see travel destinations for 2015.

The 52 cities and countries selected by the NYT this year are destinations that were once somewhat off the beaten tourist path, but which have now become familiar cities for the world’s globetrotters.

Columnist Elisabeth Eaves, writer of the Seoul section, recommended to readers that they visit three places in particular in Seoul: the Dongdaemun Design Plaza (DDP), the Seoul branch of the National Museum of Modern and Contemporary Art and the National Hangeul Museum. 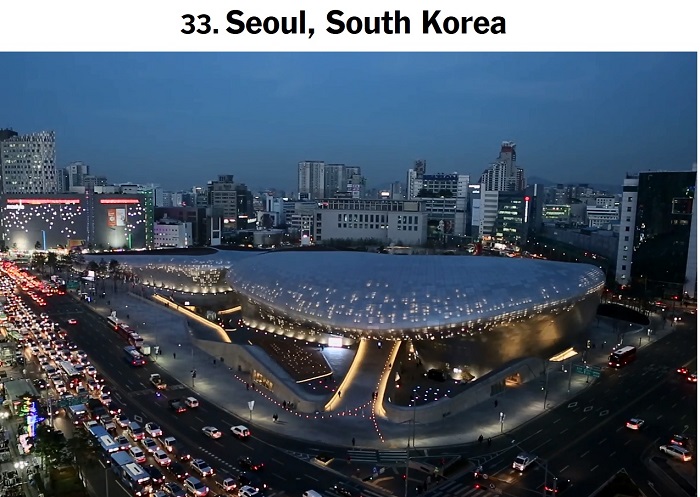 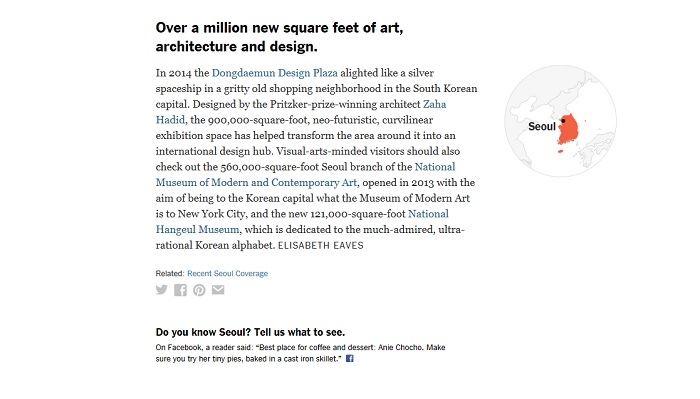 Seoul was included in a list of 52 cities and countries that the NYT recommends readers visit in 2015. Pictured is a view of the Dongdaemun Design Plaza lit at night.

The Dongdaemun Design Plaza is a multi-functional entertainment and exhibition facility built on the grounds of Seoul’s old baseball stadium. It gained a lot of spotlight upon its inception as it was designed by architect Zaha Hadid. The NYT said that it looks like, “a silver spaceship,” with an explanation that the neighborhood used to be a, “gritty old shopping neighborhood,” but that this, “neo-futuristic, curvilinear exhibition space has helped transform the area around it into an international design hub.”

The Seoul branch of the National Museum of Modern and Contemporary Art offers easy access to art for people in the heart of the capital city.

The newspaper also recommended that art lovers visit the Seoul branch of the National Museum of Modern and Contemporary Art (MMCA). The Seoul branch opened in 2011 becoming the third branch of the MMCA, following the Gwacheon branch in Gwacheon, Gyeonggi Province, and the Deoksugung branch located inside Deoksugung Palace. The new Seoul branch has been praised and loved by art fans, as it offers easy access to art for people in the heart of the city. 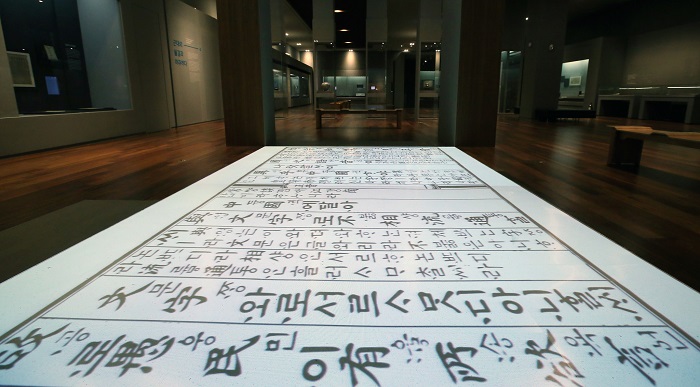 The National Hangeul Museum displays a wide variety of information about the Korean alphabet.

Finally, the NYT also recommended people visit the National Hangeul Museum which opened last year. It said that the museum is dedicated to Hangeul, the Korean alphabet, a writing system that is, “much-admired and ultra-rational.”

Every year, the NYT selects 52 cities and countries that have recently popped up on the jet set’s radar, based on recommendations from its correspondents and from its journalists across the globe. Regarding this year’s list, the NYT said that it’s a selection of locations that are historically meaningful or that have gone through an innovative transformation.

In this year’s list, Milan secured the top place, where a global expo will take place from May to October 2015. It was followed by Cuba, which has recently taken diplomatic steps with the U.S.