Seoul, a top-ten city for students

Seoul has been selected as one of the ten best cities in the world in which to be a student.

The Guardian newspaper reports on the QS Best Student Cities 2015 report which introduced Seoul as one of the best cities worldwide for students. QS, a global online career and education network, released the results on its website on November 25. They’re based on QS’ World University Rankings 2014/15, an annual report that lists some of the top universities in the world. Seoul has 14 institutions of higher-education on that list.

The QS Best Student Cities rankings evaluated cities based on five major categories: the collective performance of the city’s universities, the student make-up of the city, desirability or the “quality of living” of the city, the regard in which domestic employers hold local universities and, finally, affordability. 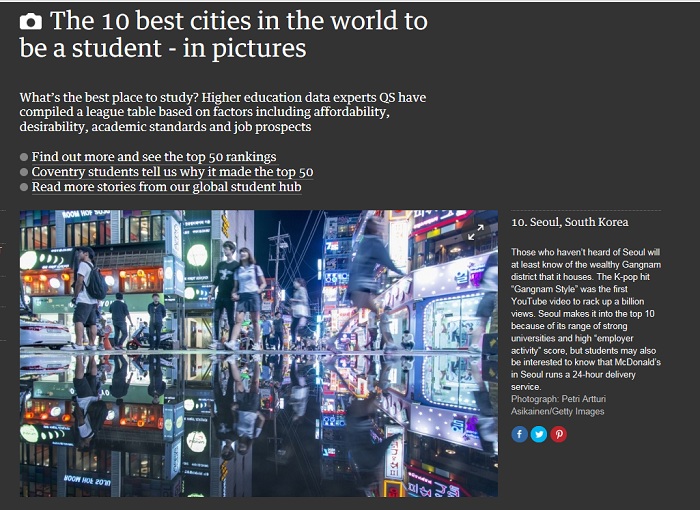 The Guardian newspaper reports on the QS Best Student Cities 2015 report which introduced Seoul as one of the best cities in the world in which to be a student.

The Guardian, a U.K.-based daily, talked about K-pop when reporting the survey results. “Those who haven’t heard of Seoul will at least know of the wealthy Gangnam district that it houses. The K-pop hit ‘Gangnam Style’ was the first YouTube video to rack up a billion views.”

Two of the main reasons behind Seoul being included in QS’ top ten list are its range of strong universities and the regard in which those universities are held by domestic employers. The Guardian also noted that students in Seoul can have McDonald’s delivered 24 hours per day.

The QS Best Student Cities 2015 rankings came up with some other interesting points about Seoul. It asserted that, going beyond the capital’s range of universities and their domestic reputation, Seoul is known as, “a 24/7 city in which things are never dull.” The research company mentions night markets, tea houses, online gaming cafes, and QS says the city, “is as alive at 3:00 a.m. as it is at 5:00 p.m. The magic of this city is that boredom is an impossibility, with culture, history and creativity anywhere you turn.”

The list is topped by Paris and is followed by Melbourne, London, Sydney and Hong Kong. Seoul nudged into the top-ten list this year, moving up four places over last year, to land in tenth place.