Autumn colors: when the skies turn blue and the hillsides crimson, Korea is at its best

Any expat that has lived in Korea for more than a month has undoubtedly been treated to one or more short lectures on the country’s four distinct seasons. Along with Korean food, the weather and seasons are favored topics for taxi and water cooler small talk, especially among the older generation.

Though seemingly an odd point of pride at first, it begins to make sense when considering the degree to which Korean culture revolves around the seasons. Recreation, cuisine and holidays are all related to seasonal change. While every time of the year brings new activities to explore, there is perhaps no better time to see the country than in fall.

The crisp autumn air is refreshment from the hellish humidity of the summer monsoon months. I first arrived in Korea just as fall was beginning. In a matter of a few weeks, I was invited to my first real autumn experience in Korea: a hike up Mt. Dobongsan on the outskirts of northern Seoul for a day of viewing danpung, or the changing of the leaves. It was in that season that I found my love for Korea’s natural beauty. 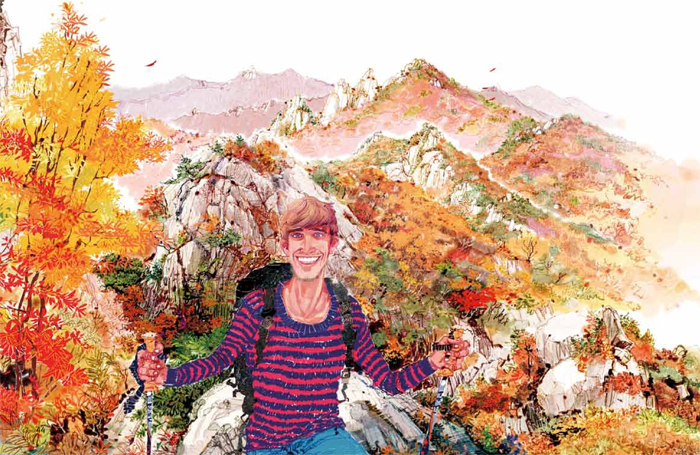 Though I heard that Korea had a strong hiking community and had imagined that the mountain trails would attract a healthy handful of outdoor enthusiasts, I wasn’t quite prepared for the crowds that flocked to the tiny town that day. Hoards of people filled the restaurant stalls at the base of the mountain serving every manner of Korean specialties, from salted fish to steamed silkworm larvae. It wasn’t just the crowds I wasn’t prepared for though.

Coming from the Canadian countryside, I am used to colorful falls and beautiful scenery, but I still could not have imagined the view on the hike up those rocks. The entire mountain face was covered in vibrant red, orange and yellow hues that rolled out over the hills into the distance. From the peak, I could see where small farms tucked into valleys met the edge of the city. It is still among the most beautiful views of Korea I can remember.

Equally surprising was the spirit of the outdoor community. Hiking may be an allages activity, but in Korea, the rule seems to be the older, the better. While I was redfaced and gasping for air, more than one couple past their 70s flew by me without breaking a sweat. The fall spirit of love and generosity was alive and well. One couple even pulled me aside to share barbecue duck and makgeolli, or Korean rice beer, near the peak. In no time at all, I had fallen in love with Korea’s autumn nature and was looking to explore more areas of the country.

That same year, I took a cruise on Chungjuho Lake in Chungcheongbuk-do. Though the hills were much smaller, the scenery was no less impressive. The crowd on the two-hour cruise was much smaller and quieter, consisting of a few expat teachers and Korean families. The ride from the city of Chungju to Danyang passes through small valleys and islets, some vacant, some settled with cozy farmhouses. Unlike the mountains in Seoul that inevitably meet the concrete of the city, the autumn in Chungju seems to have no limit. The red and orange foliage seems to stretch out in all directions, making it a perfect getaway for city dwellers in need of a break from traffic and neon lights or casual tourists looking to see a different side of the peninsula.