The second group of North Korean athletes competing in this year’s Asian Games in Incheon arrived in South Korea on September 16. The delegation, including officials and 87 athletes, flew on Air Koryo from Pyongyang to Incheon International Airport. They later arrived at the official athletes’ village.

North Korean athletes, including the first 94 men and women who arrived on September 11, will attend a ceremony on September 18 to welcome all the athletes participating in the Asian Games. In total, North Korea will send over 260 officials and athletes, and they will participate in 14 sports, including swimming, football, archery, boxing and track and field. There will be three more groups arriving between now and September 28. 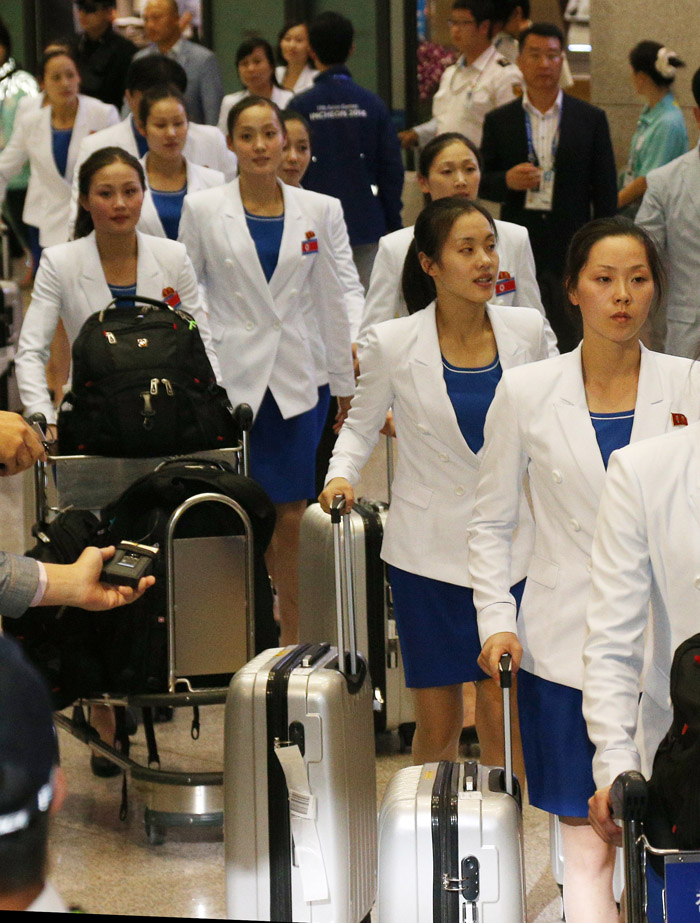 North Korean athletes on the bus wave to supporters who showed up at the airport to greet them. (photo: Yonhap News)

North Korea took part in the Asian Games for the first time in Tehran, Iran, in 1974. It has ranked fourth, in terms of the medal count, three times so far. During the Asian Games in Busan in 2002, North Korea was ranked ninth, with nine gold medals. This time, it aims to win 10 gold medals and to place in the top 10.

North Korea’s traditional strength is weightlifting. Three weightlifting gold medalists from the London Olympics are on the North Korean side and will participate in these games. The North won 15 gold medals at the 2013 Asian Weightlifting Championships in Pyongyang in September 2013, raising medal hopes for Incheon.

The North Korean women’s football team is also considered a leader in Asia. The team won the East Asian Football Championship last year. The country also has high hopes for medals in mixed-doubles table tennis, in the men’s 55 kilogram Greco-Roman wrestling and in the men’s vault. Ri Se-gwang, who won a gold medal at the Asian Games in Doha, Qatar, will compete in the vault.