*This is the third part in our series, “Masks & the Mask Dance” published in partnership with the National Research Institute of Cultural Heritage

The traditional Korean mask dance, or talchum, is a form of drama featuring the wearing of masks, singing and dancing. It was originally a regional term only applied to mask dances traditional to Hwanghae Province. It eventually became a general term referring to all forms of the art after the Hwanghae Province style of mask dance received extensive publicity.

Mask dances are referred to by different names depending on where they originate. The mask dances from Hwanghae Province are known as talchum, whereas those from the Seoul and Gyeonggi Province areas are known as sandae nori. The region of Bukcheong, North Hamgyeong Province, located in nowaday’s North Korea, is famous for its saja noreum, meaning lion dance performance.

With the Nakdong River as a divider, the western part of South Gyeongsang Province calls its version of the mask dance ogwangdae, which is made up of a performance by five clowns or five scenes. The eastern half refers to it asyaryu or deulloreum, which means a performance conducted in an open field.

In addition, the mask dance drama from the region around Andong, North Gyeongsang Province is calledbyeolsingut talnori, which means a mask performance conducted as part of shamanic rituals.

Tradition mask dances are found throughout the Korean Peninsula and each regional variation displays distinctive characteristics. As the aftermath of the Korean War divided the country into North and South, the geographical distribution of the mask dance tradition was changed markedly. Displaced natives of regions in North Korea where particular mask dance traditions originated fled to the south during the war and began to perform their local styles of mask dance around the southern capital region. These North Korean defectors have actively engaged in transmitting and preserving their mask dance traditions. The Bukcheong Saja Noreum, the Bongsan Talchum, the Gangnyeong Talchum and the Eunyul Talchum are all examples of dances that have been transmitted in the south with their original names left unchanged.

This chapter will take a closer look at those twelve mask dance performances designated in the south as Important Intangible Cultural Properties of Korea. 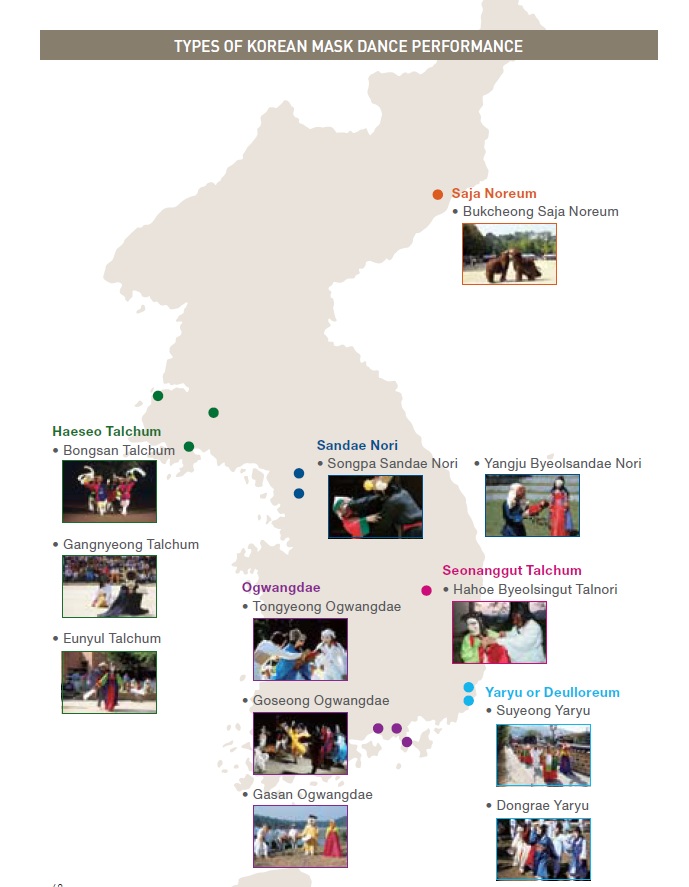 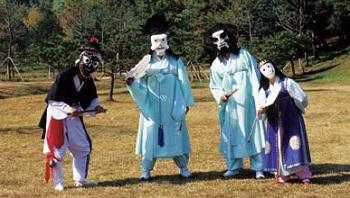 A nobleman scene from the mask dances of Bongsan

A mask dance is a type of drama divided into several acts, but they are not closely connected to form a unified story as in some Western plays. It is comprised of several scenes or chapters (gwajang), which deal with distinct episodes in a separate way. No scene is directly connected to the others and each presents a different conflict and theme. The structure of chapters and the performance style differ, as do the names used in each region. However, scenes featuring noblemen (yangban), apostate monks (pagyeseung) and old women (miyalhalmi) are included across nearly all mask dance performances.

This episode ridicules noblemen. A nobleman brags about himself by showing off his learning, but the servant ridicules his master’s knowledge. The nobleman does not even recognize that he is being mocked by his servant.

This episode satirizes a depraved old monks. He is tempted by a flirtatious young woman into removing his precious Buddhist rosary. Despite having passed through a long period of ascetic training, the old monk, charmed by a young shaman, forgets his duties and attempts to seduce her. However, the young female shaman’s prodigal lover, the drunkard, comes on the scene to criticize the old monk for his depravity and attacks him in order to win back his love. The old monk loses the young woman and is chased away by the drunkard, who is stronger. 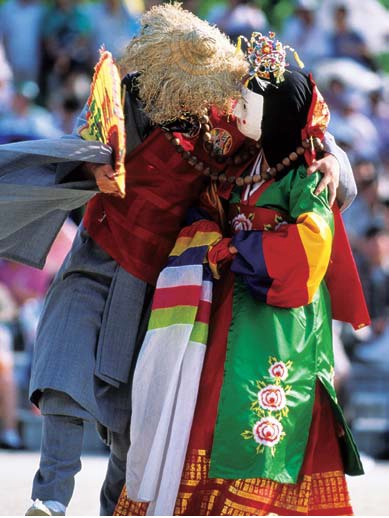 An apostate monk scene from the Eunyul-area mask dance.

This episode shows the conflict between a husband and a wife. The old woman, who is the wife, wanders all over the country searching for her husband. She finally finds him, but the callous husband breaks her heart by keeping a beautiful young concubine at his side. With everything she once had taken from her, the old woman leaves home and dies of a broken heart. Lamenting the death of his wife, the husband invites a shaman to comfort her soul (in Haeseo-style mask dances) or hosts a funeral service with a decorated bier (in yaryu and ogwangdae dances). This scene displays the conflict between husbands and wives, separation and reconciliation, and demonstrates shamanism taking root in the lives of commoners. 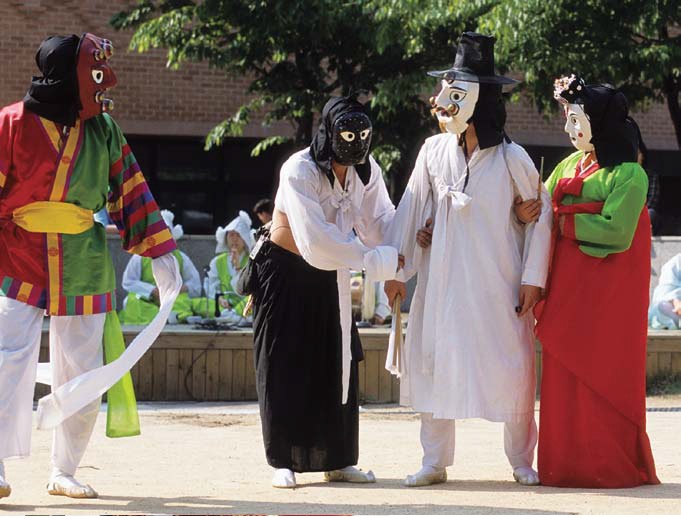 An old woman scene from the Eunyul-area mask dance.

Each regional version of the mask dance features unique dance movements and a different structure of scenes and expressive styles.

Mask dances from Haeseo boast a powerful step known as the sawichum, which is performed by leaping in the air while swirling around the hansam. A hansam refers to a long white sleeve attached to the cuff that covers the hand. This creates particularly dynamic and spectacular movements.

The mask dances from Gyeongsang Province feature the heoteunchum dance, which is performed through improvisational movements. This freestyle dance emphasizes a slow and subtle movement of the shoulders, representing the characteristics of dances traditional to the region.

Rhythmic patterns are created on percussion instruments such as an hourglass-shaped drum and a double-headed drum, while melodies are played on large bamboo flutes, two-stringed fiddles and cylindrical bamboo oboes. A variety of styles of dance are performed to tunes with rhythms ranging from fast to slow. Exciting dances are performed to a rapid rhythm, powerful dances to other rhythms, and elegant dances to slow rhythms. These rhythmic patterns help to enhance the festive spirit of the dances. 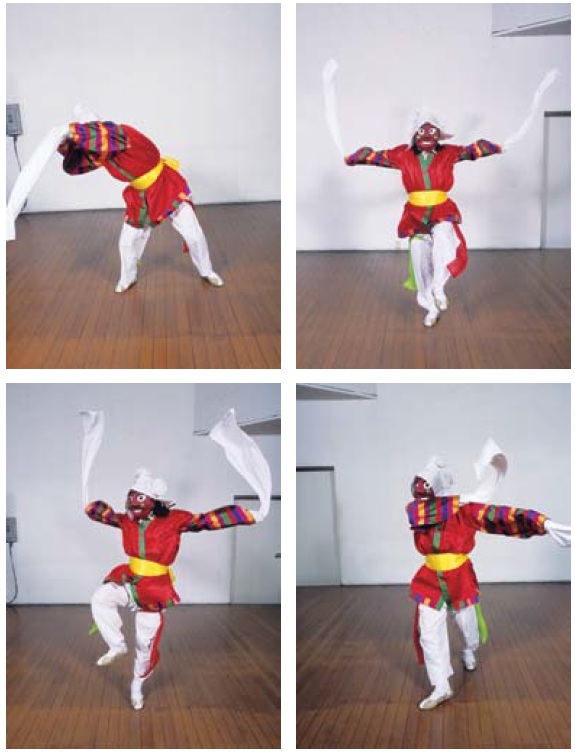 Dance movements of the mask dance from Eunyul. 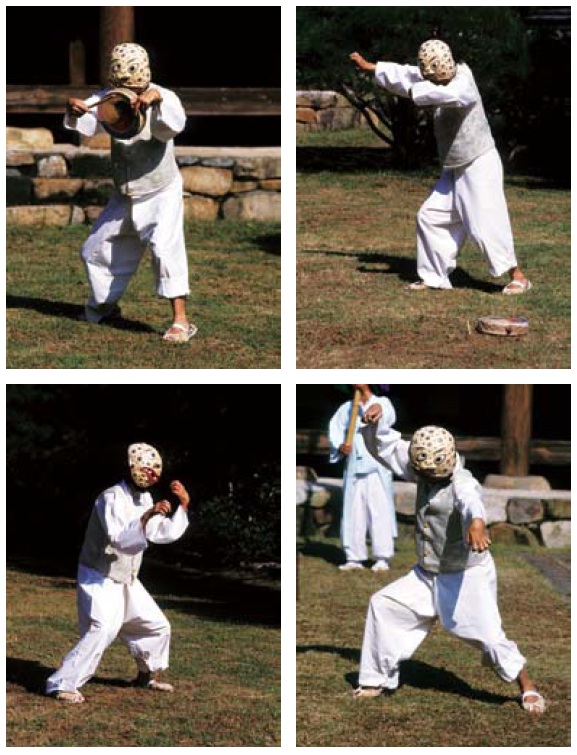 Dance movements of the mask dance from Dongrae. 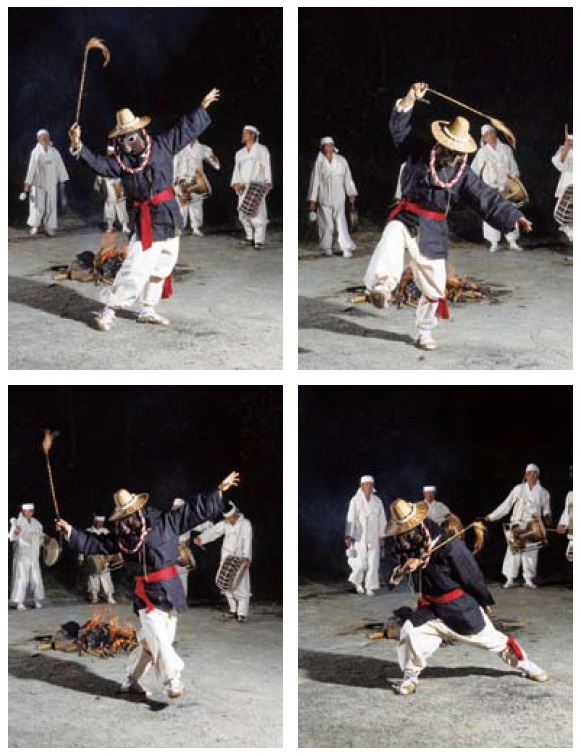 Dance movements from the mask dance of Goseong.

The mask dances of Yangju, Songpa, Bongsan, Gangnyeong and Eunyul are performed to the accompaniment of a wooden clapper, two oboes, a flute, a fiddle and two drums, plus a small gong and a large gong. Three basic rhythm patterns — the yeombul, taryeong and gutgeori — are mainly used for the mask dances.

On the other hand, mask dances from Gyeongsang Province, including Tongyeong, are performed to the accompaniment of a small gong, an hourglass-shaped drum, a double-headed drum, a large gong and a double-reeded oboe, and use the gutgeori and jajinmori rhythmic patterns.

Such different instrumentations stem from the fact that the mask dances of Hwanghae and Gyeonggi Provinces were accompanied by professional musicians, while those from Gyeongsang Province utilized farmers’ bands.

The Bukcheong lion dance is performed to the accompaniment of double-headed drum, an hourglass-shaped drum, a large gong and, distinctively, a six-holed bamboo flute. The latter is reserved for musicians with over ten years of experience and contributes to elevating the mood with a variety of tunes. 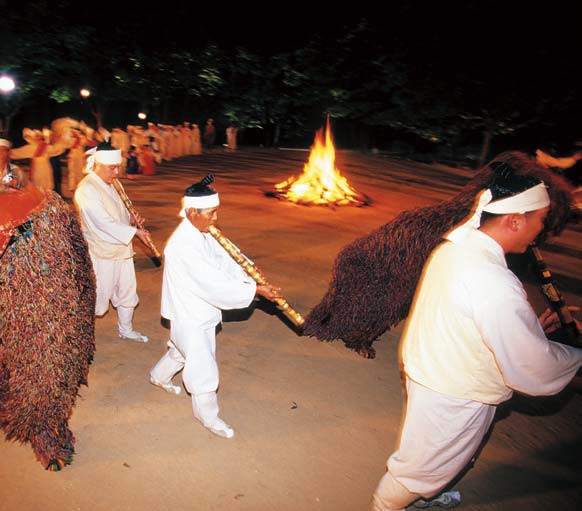 Musicians circle around during the Bukcheong lion dance.

Mask dances can be presented on a temporary stage, but are generally performed in an open field without any stage. In a venue where the center of the field serves as the stage and the surroundings become the auditorium, actors lead the performance with their dialogue and dancing while musicians accompany the actors on instruments, enhancing the mood. The audience watches the performance from seats around the performers.

Such passionate audience involvement is its most appealing feature and has endeared mask dances to the public for centuries. 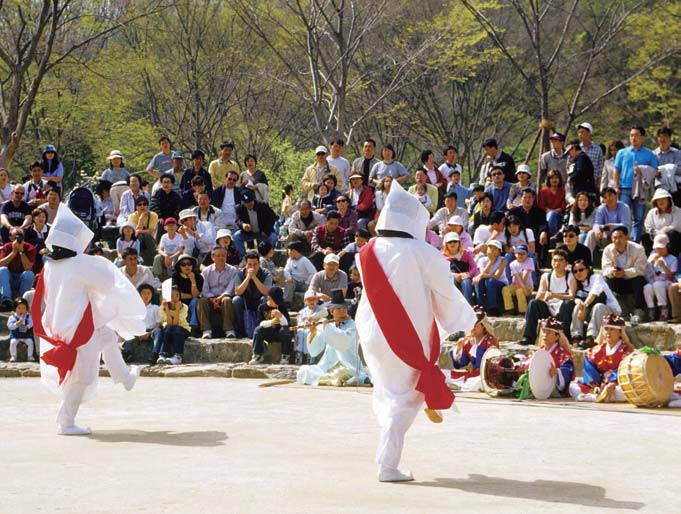